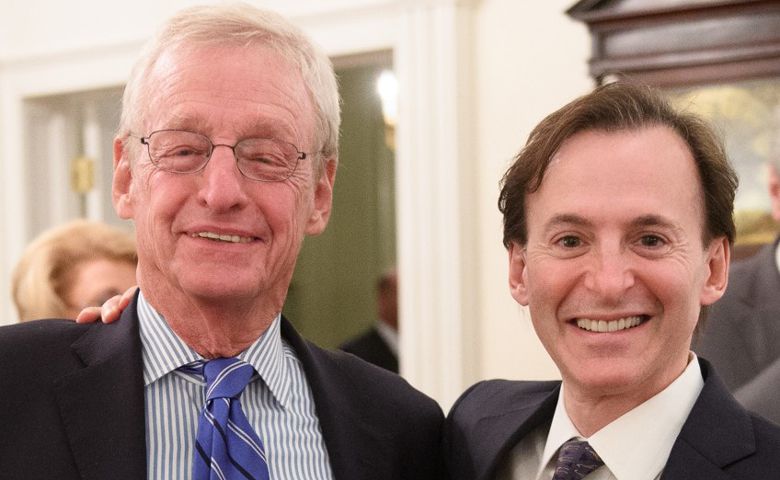 Part of the attraction of a college town is enjoying nationally- and internationally-known speakers and musicians. Acclaimed concert pianist Bruce Levingston — the Chancellor’s Honors College Artist-in-Residence — brings many eminent guests to the University of Mississippi, such as a recent visit by noted philanthropist and conservationist David Rockefeller, Jr.

The educational and cultural opportunities Levingston has added to the Oxford campus have prompted another title to be added to his name: He has been selected as holder of the Lester Glenn Fant Chair endowed by Lester “Ruff” Glenn Fant III of Washington, D.C. A longtime benefactor, Fant committed a major gift to create the endowed faculty position in memory of his father and grandfather. Ruff Fant’s father was a law professor at Ole Miss for three decades.

“Bruce Levingston is truly a treasure for our university and for our state — I cannot think of a more fitting person to serve as the inaugural recipient of the Lester Glenn Fant Chair,” said UM Chancellor Jeffrey Vitter. “Both the Fant family and Bruce play a significant role in helping our university achieve the highest levels of excellence. We are extremely appreciative of the ongoing support of the Fant family. And we applaud Bruce’s tremendous talent, teaching excellence, national stature, and the extraordinary opportunities he brings to our university community.”

Douglass Sullivan-Gonzalez, dean of the Sally McDonnell Barksdale Honors College, has observed the impact of having Levingston on the Oxford campus.

“Bruce Levingston exudes excellence in his teaching and concert performances. He drives our students to compete intellectually with the best in the world. Bruce knows how to instill confidence without backing away from the highest standard. They, in turn, perform beyond their wildest expectations,” the dean said.

One of the leading figures in classical music, Levingston expressed gratitude for the expanded faculty title and the support of Fant and his wife, Susan, who also have endowed a faculty chair in English at Ole Miss honoring their friend Hubert H. McAlexander. Holding an undergraduate degree from Vanderbilt University and a juris doctorate from Harvard Law School, Ruff Fant founded and chairs TowPath Partners, a specialty finance company that invests in mature renewable energy projects.

“I am deeply honored to be the inaugural recipient of the Lester Glenn Fant Chair,” Levingston said. “The family for whom this chair is named, and particularly donor Ruff Fant, represent the highest standards of excellence in every endeavor. I am both humbled and inspired to have been named to this distinguished position at the university. “As holder of the Fant Chair, I plan to continue to teach, serve and mentor the many gifted students in the Sally McDonnell Barksdale Honors College as well as continue to bring leading figures in the arts and humanities to Ole Miss. My goal is to share with students not only what people in other parts of the country are doing and thinking but also to help them understand how to be a part of that national and international dialogue as they go out into the world.”

The latest visit by Rockefeller — the director of Rockefeller & Co., former board chair of the Rockefeller Foundation, leading conservationist of ocean and water resources, and a passionate music supporter — expands the growing list of prominent figures Levingston has hosted at the university, including Pulitzer Prize-winning author Ron Chernow, acclaimed documentary filmmaker Ken Burns, and international ballet stars Alessandra Ferri and Herman Cornejo.

Levingston joined the university as artist-in-residence in the fall of 2014. Eleanor Anthony was influenced by Levingston while an undergraduate at Ole Miss and now is earning a degree from the Stanford University School of Law.

"Bruce’s ability to inspire and challenge students is matched only by his deep dedication to their growth and education. By bringing some of the most influential voices of our time to this university, and by sharing his own music and voice with us, Bruce empowers students to realize the impact our own voices may have. He represents what teaching is at its best, and the incredible mark he has already left on this university takes shape in the lives and minds of each of his students.”

Levingston holds degrees from the University of Texas at Austin and the Aaron Copland School of Music and studied in Sion, Switzerland, at the Royal Conservatory of Toronto and the Aspen School of Music. He enjoys extraordinary experiences and wants Ole Miss students to have the same caliber of opportunities.

“My hope is that whether or not students pursue a career in the arts, they will learn to be thoughtful, innovative and resourceful, so that they may build fulfilling and meaningful lives for themselves and for the communities in which they live and work,” Levingston said.

Regarding his personal achievements, many of today’s most important composers have written works for this pianist, and his Carnegie Hall and Lincoln Center world premiere performances have won notable critical acclaim. The New York Times has praised his “mastery of color and nuance” and The New Yorker has called him “a force for new music.”

Levingston’s recordings have also received high critical praise. His album Heavy Sleep was named one of the Best Classical Recordings of 2015 by The New York Times, which called the disc “exquisite.” Levingston’s most recent album, Dreaming Awake, featuring the music of Philip Glass and actor Ethan Hawke, was selected as Album of the Week by WQXR/ WNYC, calling the disc a ”passionate and spontaneous portrait of the composer” and "a boldly individual approach to the keyboard works of an American master.”

In addition, Levingston is the author of Bright Fields: The Mastery of Marie Hull, a comprehensive biography and survey of the work of the prominent Mississippi painter. He collaborates with highly-respected cultural institutions on programs including American Ballet Theatre, Boston Ballet, Museum of Modern Art, Whitney Museum of Art, Alliance Française/French Institute, The Aspen Institute and The Aspen Music Festival.

The Lester Glenn Fant Chair is open to accept gifts from individuals and organizations. Checks can be made out to the University of Mississippi Foundation, with the Fant Chair noted in the memo line, and mailed to 406 University Avenue, Oxford, Miss., 38655; or by visiting online at www.umfoundation.com/makeagift/.

By Tina H. Hahn and Staff