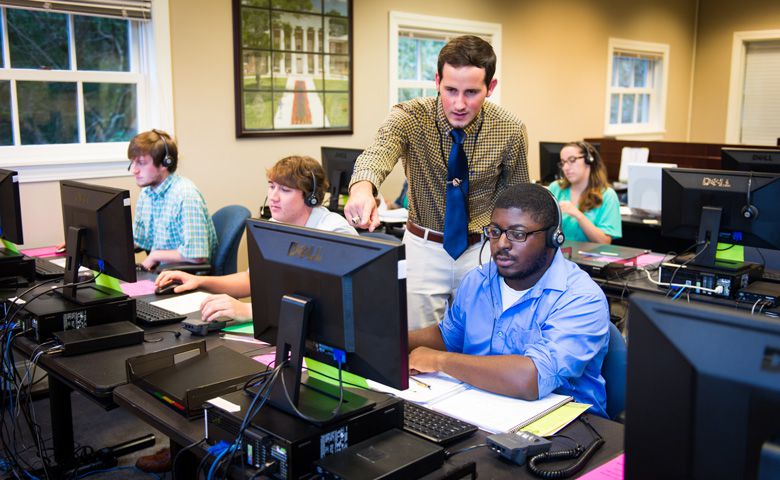 The University of Mississippi Office of Development announced recently that Brantley Motes of Athens, Alabama, has been assigned to manage its fundraising call center.

Motes is employed by Ruffalo Noel Levitz (RNL), a Cedar Rapids, Iowa-based company that specializes in technology-enabled fundraising services. RNL works in association with the Office of Development to operate the call center.

As a student fundraiser at Auburn University, Motes was promoted by RNL to the position of student supervisor. Just a few courses shy of graduating, the Tiger fan was promoted again to program center manager and relocated to Ole Miss in early August.

“I won’t completely convert, but I will be a Rebel fan too,” said Motes, who has decided to make Ole Miss his alma mater and Oxford, Mississippi, his home. He’s already pinpointing the best fishing spots in the area and looking forward to his first game day experience in the Grove and Rebel baseball in the spring.

Motes has a goal to raise at least $642,000 in unrestricted pledges for the university by June 2017.

“It’s a great way to raise awareness about how much the university really needs unrestricted support,” Motes said. “When I started calling at Auburn, it didn’t occur to me that a university is a non-profit organization. Less than 15 percent of the University of Mississippi’s operating revenue comes from the state, so unrestricted giving really does enable the school to provide students a better quality education.”

Motes said the call center contacts potential donors five nights a week, asking them to contribute to the Ole Miss Fund and other campaigns that provide unrestricted financial support for the university’s schools and departments.

“Contributions to the Ole Miss Fund enable deans to have discretionary funds to support areas of greatest need,” Motes said.

Student fundraisers under Motes have secured more than $44,018 in unrestricted gifts for academics, breaking a 10-year record for the month of August.

“The call center team has performed unbelievably this month,” said Maura Wakefield, assistant director for annual giving. “They have a drive and passion for Ole Miss that has obviously translated over the phones. And we are so grateful to the alumni, family and friends of the university who continue to accept our call to give so generously.”

The Call Center at Ole Miss was recently dubbed the Landshark Line, a moniker that reflects the popular nickname claimed by Rebel football players on the defensive line. It helps motivate the student callers, Wakefield says.

“Most SEC schools nickname their call centers — for example, the Crimson Callers at Alabama, the Calladores at Vanderbilt and the Hog Callers at Arkansas,” Wakefield explained. “It reinforces that we’re all part of the same community and lets prospective donors feel an immediate connection with the caller.”

Motes agrees: “It’s awesome work we’re doing here. The students really enjoy speaking to alumni because they get to hear stories about the university that they wouldn’t hear otherwise. It’s one thing to get a request by mail, but it’s much better to be able to speak to a person who’s real. The alumni enjoy it too.”

To contribute to the University of Mississippi Annual Fund, contact Maura Wakefield at mmwakefi@olemiss.edu, or visit https://www.umfoundation.com/makeagift/.