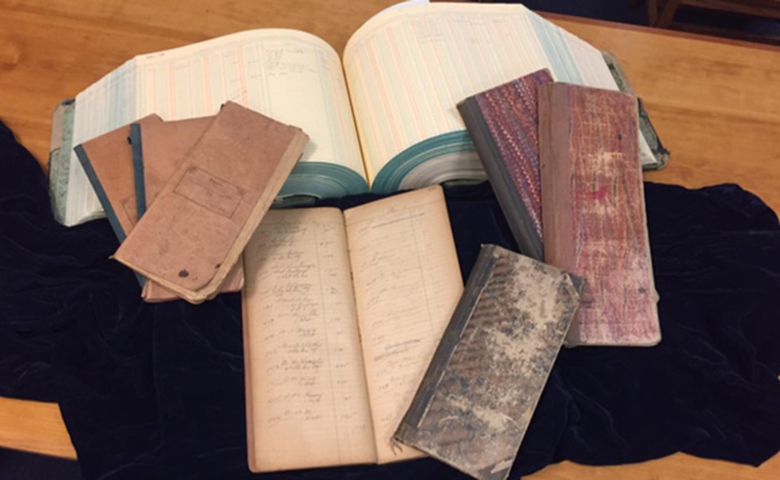 The Department of Archives and Special Collections is now home to a collection of accounting ledgers and other items from Neilson’s, dating back to 1872.

The first day of October 1962 was tense in Oxford, with soldiers patrolling the streets and smoke lingering in the air. But the day after historic riots at the University of Mississippi was a solid one for downtown businesses, according to ledgers from the J.E. Neilson Co. department store.

“It was a pretty good day of business,” said Neilson’s owner Will Lewis Jr. “I don’t know why – they still had troops around the Square. I guess people were curious and came in and bought something.”

Lewis has donated a collection of handwritten accounting ledgers, correspondence and daybooks from the store to the University of Mississippi’s J.D. Williams Library. The oldest continuously operating store in the South, Neilson’s began computerizing its sales and account information in the 1980s, so the yellowing ledgers and other records weren’t needed anymore.

They had been stored in a basement for years before Lewis, recognizing their value, offered them to the library’s Department of Archives and Special Collections. The 63 volumes, dating from the 1870s to the 1990s, offer a fascinating glimpse into the history of Lafayette County and Oxford.

“The documents themselves are a good indicator of the financial conditions of the town and county,” he said.

The collection will be of interest not only for its local history but also as a significant resource for scholars, especially historians seeking insight into a Southern town from Reconstruction through the end of the 20th century, said Jennifer Ford, head of the department.

“This significant donation will greatly supplement the department’s archival holdings relating to the history of Oxford and Lafayette County,” Ford said. “We are all sincerely grateful to Mr. Lewis and his family for this gift.”

The items detail transaction history and buying trends, which include how much local residents were able to spend at the time. For example, researchers can track the area’s economic downturn through sales at the beginning of the Great Depression, Lewis said.

Neilson’s also served a number of customers well known around town and, in some cases, worldwide. The Faulkner/Falkner family had customer accounts at Neilson’s, and William Faulkner is listed in several entries, including a $5 purchase – a large sum for the day – in 1928, not long before “The Sound and the Fury” was published.

Many University of Mississippi administrators and professors also had accounts at the store. Ledger entries chronicle Chancellor Robert Fulton, who served from 1892 to 1906, buying buttons and supplies for classes, for example.

Records also reveal that the store once had a thriving confectionery shop, although its inventory might seem odd by modern standards. Sales of cigars, oysters and oranges rivaled receipts for candy and other sweets.

William Smith Neilson of East Tennessee founded Neilson’s department store in 1839 after deciding to move to the former Chickasaw territory that had recently been opened to settlers. He briefly considered establishing his store in Memphis before deciding Oxford would be the best place.

The general store opened as a log cabin on the north side of the Courthouse Square, selling groceries, hardware and a variety of other items – even coffins – far different from the high-end clothing lines popular with modern customers. Neilson converted his money to gold before the Civil War, so when the store was burned along with much of Oxford in 1864, he was able to rebuild.

Besides ledgers and sales records, the collection includes ink blotter copies of personal and business correspondence between Neilson and his suppliers.

The store reopened in 1866 and has been open for business for 150 straight years.

It was passed down through the Neilson family to grandson David Neilson. Seeking to retire, he sold the business to Lewis and his sister, Olivia Lewis Nabors, in 1964. Their father, William Lewis Sr., worked at Neilson’s from 1912 to 1989.

The donated materials are a treasure trove of information about the community and the families who have lived here, Ford said.

“The collection will be much more usable for researchers once processed and indexed by our staff,” she said. “There are so many potential uses for the ledgers.

“I would love to see them used not only for academic research but by local families tracing their own histories.”

For more information about the Department of Archives and Special Collections, visit http://www.libraries.olemiss.edu/uml/archives-special-collections.