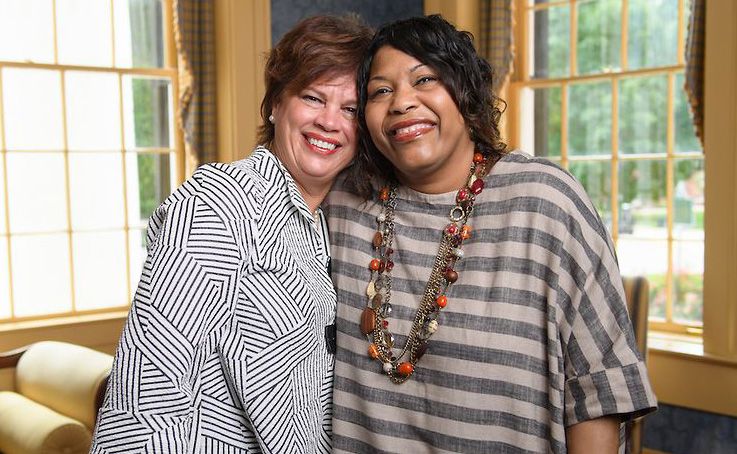 A crisis situation often reveals who one’s true friends are. University of Mississippi colleagues Charlotte Pegues and Leslie Banahan discovered the depths of their friendship recently when a health crisis for the former brought the latter to her rescue.

Three years ago, Pegues’ kidneys began to fail, eventually placing her in dire need of a transplant. Soon after hearing the news, Banahan volunteered to donate one of her own kidneys. Physicians determined the two were a match and the successful operation was performed June 9 at the University of Mississippi Medical Center.

“I feel like Leslie is my sister,” said Pegues, assistant provost for academic affairs and registrar. “I want to repay her in some way, but she said this was a gift. It’s a God thing!”

Banahan, assistant vice chancellor for student affairs, said she is grateful and honored that she was able to be there for her friend.

“I wouldn’t have done this for just anyone, but Charlotte is an amazing woman, someone I wanted to help so she could live a full, long, happy life with her husband, family and friends,” Banahan said. “We have a special connection now – sisters, really – as we have shared this journey together.”

Because becoming a living organ donor is a life-changing decision, Banahan said it was not a choice that she made quickly or without a great deal of research, prayer and consideration.

“Ultimately, my faith in God and my love for Charlotte led me to be a living organ donor,” she said.

When Pegues was referred to UMMC’s transplant team by her nephrologist in Oxford, she told them that she had a potential live donor, said Dr. James Wynn, professor of transplant surgery who performed Pegues’ kidney transplant.

“That’s the best transplant circumstances – when you can have a living donor,” Wynn said. UMMC’s procedure is to give the person in need of a transplant information to pass on to the potential donor. That person contacts UMMC to say they’d like to donate a kidney.

That’s what Banahan did. “We found that she was compatible with (Pegues) and also medically suitable,” Wynn said. “It’s great when that happens.”

Registered nurse Jessica Johnston served as Banahan’s living donor transplant coordinator. She arranged Banahan’s own surgery and pre-operative care, and made sure that she fully understood the risks – and that she could change her mind at any time.

“She was very intent on helping her friend,” Johnston said. “It’s a very selfless act to give up a kidney. There are risks to the donor, so these are pretty special people who volunteer to do this.

“It seems like a very short process, but it’s very intensive and very thorough,” Johnston said of the weeks leading up to the transplant.

Part of registered nurse Mollie King’s job is to give post-surgery transplant patients emotional support and to answer their questions at any time. Pegues “always talks to me about Leslie,” King said.

“She’s nicknamed her kidney as Carlie – a combination of Charlotte and Leslie. We joke about how Carlie is doing. She’s grateful, very knowledgeable and she wants to know everything about all aspects of her care. She’s had her ups and downs, but she looks good and she feels good.

Pegues’ nephrologist encouraged her to pursue being placed on the transplant waiting lists in December 2013. She told Banahan and her other friends at that time. She was listed at three centers since 2014, and began peritoneal dialysis treatments at home in January 2016.

“The treatment lasted for eight hours each night, and that doesn’t include time spent connecting and disconnecting to the machine,” Pegues said. “What a relief that those days are behind me!”

“Leslie is a confidant and I trust her,” Pegues said. “She is a very caring and generous person. She continually looks for ways to help people and improve upon what’s already being done.”

“Charlotte never, never complains about being sick or feeling bad, so it was a surprise when she told me that she was going to need a kidney transplant,” Banahan said.

Banahan said that she prayed that her friend would get a kidney and be healthy once again. But the kidney never came, Pegues’ kidneys failed and she had to go on dialysis.

“That’s when I first thought about the possibility of giving her a kidney,” Banahan said. “I spoke to a couple physicians and had several conversations with the living organ donor coordinator at UMMC.

“I decided not to tell Charlotte I was trying to be her donor until I had passed the first couple of medical tests. When those tests yielded encouraging results, I told her that I wanted to give her a kidney.”

Pegues was still amazed when Banahan offered the organ donation.

“I felt so grateful that she offered to give me such a generous gift,” Pegues said. “When she told me she had started the process of being tested, I was overjoyed. Even before it was determined that she was a match, I was so touched that she considered doing such a thing for me.”

The matching process took some time because of the extensive testing involved. After it was determined the two were compatible, they set a surgery date that worked with their schedules.

“My husband and family were thrilled, to say the least,” Pegues said. “My husband said that I really have a true friend.”

Before becoming a living organ donor, Banahan conferred with her family.

“I discussed the idea with my two adult children,” she said. “They were both so encouraging and supportive of my decision.”

Since the procedure, Pegues has been continuing her recovery at home.

“As one would expect, I experienced pain in the days immediately following the surgery,” she said. “I rested a lot because there was not much else I could do. Simple tasks wore me out, but I feel stronger each day.”

Banahan said her first couple of weeks after the surgery were challenging.

“There was quite a bit of pain,” she said. “Then, for me, it was a matter of regaining strength and stamina. At eight weeks after surgery, I feel good and am working full time.”

The two agreed that they received excellent care at UMMC and have learned several things through this process.

“First, there is a state law which grants up to six weeks of leave to an organ donor so that the individual does not have to use personal or medical leave,” Pegues said. “Second, there is a tax credit of up to $10,000 available to donors for expenses they incurred such as travel and hotel accommodations. Third and finally, all medical expenses (testing, hospital services) are charged to the recipient.”

“There has been no financial cost to me at all throughout this entire process,” Banahan said. “I hope our story encourages others to consider being a living organ donor.”

Live donors aren’t uncommon nationally, but it can be difficult to find good candidates in the Deep South.

“Part of our challenge is that we serve a predominantly African-American population, and diabetes and high blood pressure are very common,” Wynn said. “Even when we have family members or friends willing to donate, they frequently have medical reasons for not being able to donate.”

The main consideration, Wynn said, is that the donor and recipient must have compatible blood types.

Banahan and other live donors are advised on the front end of the risks of surgery. Both donors and recipients go through an evaluation process at UMMC to ensure that the donation is being made freely and without coercion, and that donors are doing it for the right reasons, King said.

“Facing a major operation is a worrisome thing, and a lot of our focus is to allay the fears” of both donors and recipients, Wynn said. “Because of the precautions we take, it’s the safest operation we do. There’s risk, but compared to any other major operation, it’s extremely safe.

“The more important question is, what’s the lifelong risk to the donor of having only one kidney? We know the risk is not zero, but it’s extremely small. We are careful to make sure we identify the potential donors who have problems that can put them at risk for kidney failure.”

While Pegues and Banahan made a model donation team, at least 700 people are on UMMC’s waiting list for a kidney transplant, Wynn said.

“We did 77 kidney transplants in the first six months of this year,” he said. “That shows there’s a large gap between the number waiting, and the number of donations available. Donation is a great thing.”

“It’s a beautiful gift to give upon your death, but we want to make more people aware that there’s the option of live donation,” Johnston said.

Pegues and Banahan have “such a beautiful friendship,” Johnston said. “When you are a living donor, that’s a gift that keeps on giving. Leslie will give this gift to Charlotte every day.”

Fatefully, it was a work crisis that initially brought the two Ole Miss employees together in the mid-1990s.

“Leslie was working in international programs and I was working in admissions,” Pegues said. “We were assigned to work on a very sensitive student issue.”

“The assignment required us to spend quite a bit of time together, and I was quickly impressed with Charlotte’s intelligence, professional knowledge and skills, and her no-nonsense approach to our work,” Banahan said. “We were a good team, and I knew she was someone I could trust and count on to make good decisions.”

Resolving the matter at hand, the two continued working together on various projects and committees. Both eventually served as assistant vice chancellors for student affairs, positions that afforded them the opportunity to work together on a daily basis. What began as a professional relationship developed into a strong friendship.

“Leslie is always kind and professional,” Pegues said. “Having both held positions of assistant vice chancellor for student affairs, we worked closely together for several years. We spent a lot of time working on very serious matters. From what I recall, I think we agreed on most things.”

Pegues is “a person of strong faith and personal values” who possesses a great sense of humor, Banahan said. “I think we both are fairly optimistic people, and we both chose careers in higher education,” she said. “I’m sure we have disagreed occasionally, but I honestly can’t remember a specific disagreement. While our life stories are very different, we just connected and supported one another.”

By Edwin Smith and Ruth Cummins