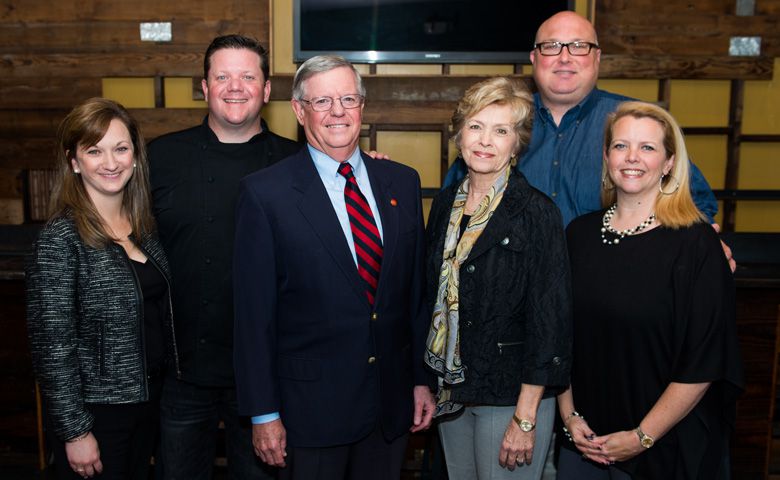 Family and friends say the late Don Jones loved the University of Mississippi from the moment he stepped on campus in the early 1960s.

“He just immediately embraced Ole Miss, became a part of it and was a leader on behalf of the university in so many ways,” said James W. Davis, Peery Professor Emeritus and Jones’ lifelong friend. “Every cause that we ever had, Donny supported financially and otherwise. He was involved with everything important that we ever did.”

“When Don enrolled at Ole Miss, he felt he had been given an opportunity and wanted to make the best of it,” his wife Melissa Jones said. “He had a deep love of the people associated with the university, the professors who guided and encouraged him while getting his bachelor’s and master’s degrees in accounting. He also had a love for the school and always wanted the very best for it.”

“He even had the Rebel brand on his golf club covers!” recalls Evatt Tamine, director of the Brockman Foundation, a charitable trust for which Jones served as financial adviser for more than two decades.

On April 12, 2016, less than two months before Jones died suddenly at his Oxford, Mississippi, home, the Brockman Foundation surprised him with the news that the Donald D. Jones Chair of Accountancy Endowment had been established within the Patterson School of Accountancy on his beloved Ole Miss campus.

“Through Don’s work, finding investment opportunities and following through with them, the Brockman Foundation was able to build to the extent to where it can now make some substantial gifts,” Tamine said. “We are able to do the work we do, to a large extent, because of the work Don did over the years. So it seemed appropriate to do something that honored him.”

An initial gift of $2 million established the endowment that will support salary supplements, research and creative activity in an effort to attract and retain outstanding faculty.

“Because of this incredible gift, we will be able to ensure quality teaching, research and service for future generations of University of Mississippi students,” Dean Mark Wilder said, adding that the School intends to fill the chair in 2017. “We are extremely grateful to the Brockman Foundation for its generosity and for continuing Don Jones’ legacy of involvement within the Patterson School. We are honored that the Don Jones name will be forever associated with the Patterson School faculty and our students.”

Davis agreed: “This gift is an immense honor. We knew he was a positive influence in the company, but we now know how much they appreciated his dedication, energy and ability to grow the company. They truly honored him in a way that was appropriate; they knew what he loved.”

Melissa Jones said her husband, who was overwhelmed by the gift, told her that he hoped it would keep the Patterson School at the forefront of nationally renowned accountancy schools and give students the opportunity to excel.

“This was a very humbling experience and both of us were very grateful for the recognition,” she said. “Don felt strongly about the School of Accountancy and would tell anyone who would listen how important it was to him.”

At Ole Miss, Jones met Melissa Massengill, a 1968 graduate of the UM School of Business Administration. They were married on Dec. 23, 1967, and together raised a daughter, Kelly, and a son, Dru.

After graduation, Jones joined Arthur Andersen & Co. in Houston, Texas, as an auditor from 1967 to 1968. He then served a two-year stint in the U.S. Army as a second and first lieutenant, Finance Corps, before returning to Arthur Andersen until 1976. Jones then had the opportunity to join Brown & Root, Inc. in Houston from 1976 to 1981. There, he provided leadership in multiple capacities from internal audit manager to senior manager of the power division and finally as the senior manager of computer services. In 1981, he joined Universal Computer Systems, Inc. in Houston, where he was the chief financial officer until 1995 when he became chief executive officer of Pilot Management Ltd. in Bermuda. He served there until 2008.

Jones was active in his church and was a member of the Mississippi Society of CPAs, Texas Society of CPAs, Georgia Society of CPAs and the Bermuda Chapter of Canadian Chartered Accountants. He was an avid golfer, hunter and fisherman and a dedicated supporter of Ole Miss Athletics, particularly football, baseball and basketball — all of which he would watch seated next to Davis, his friend of 51 years. Additionally, he enjoyed reading, history, telling stories and spending time with his children and five grandchildren.

“For Don to be back in Oxford, heavily involved with the university, and to have this gift made him a very, very happy man,” Tamine said. “He always felt one step closer to heaven in Oxford.”

The Donald D. Jones Chair of Accountancy Endowment is open to gifts from individuals and organizations. To contribute, send checks with the endowment name noted in the memo line to the University of Mississippi Foundation, 406 University Ave., University, Miss. 38655; or visit www.umfoundation.com/makeagift. For more information on ways to support the Patterson School of Accountancy, contact Brooke Barnes, director of development, at brooke@olemiss.edu or 662-915-1993.