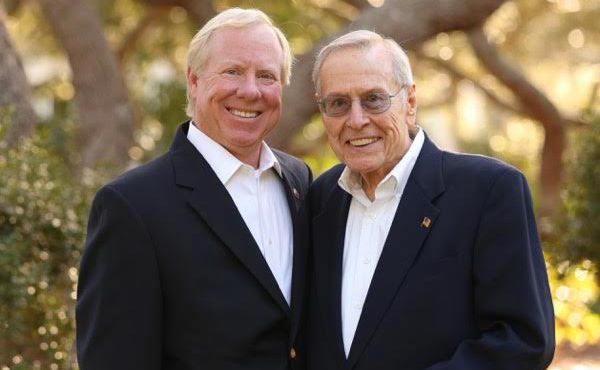 Sam Millette Jr. (left) stands with his father, Samuel M. Millette, the namesake of an endowment the Millette family established to honor their patriarch and to support faculty recruitment and retention in the School of Business Administration.

Samuel M. Millette is a U.S. Marine war veteran, an esteemed attorney with a 50-year career in Charlotte, North Carolina, and a revered family man.

“He is the standard to which I aspire,” said Sam Millette Jr. of Destin, Florida, whose admiration for his 93-year-old father led him to establish an endowment in his name.

The Samuel M. Millette Faculty Support Endowment in Business will provide funds to support and expand the University of Mississippi School of Business Administration by enabling the recruitment and retention of outstanding faculty. The endowment can support salaries, research and creative activity, programs, and other faculty needs.

“The gift is to honor my dad who generously paid for my education in the ‘B School’ even though I had not decided to be a serious student until I entered law school years later,” said Millette, a 1975 graduate of the UM School of Business Administration. He and his wife, Lynne, who earned a bachelor’s degree in religion from Ole Miss in 1975, have two children, Martin and Lindsey, both UM graduates.

The Millettes are life members of the Ole Miss Alumni Association; Lynne is a past board member. Sam and Lynne are charter members of the Vaught Society and members of the Lyceum Society. In establishing the endowment, Millette said he wants to see the university continue to hire faculty members who have the experience and expertise to prepare students for life after graduation.

“In these very tough economic times, the job market is especially competitive,” he said. “Also, we need to continue to hire the best of the best in our business school in order to attract bright minds and continually raise the academic standing of the university.”

Sam Millette Sr. is a Greenville, Mississippi, native who would have attended Ole Miss, if circumstances had been in his favor.

In 1942, at age 19, he was accepted into the U.S. Navy V-5 aviation cadet program. While waiting to enter cadet school, he enrolled at Northeast Junior College in Monroe, Louisiana, where he completed a civilian pilot training course with 35 hours in a Piper Cub and 50 hours in an acrobatic bi-plane.

He was then sent to Pre Flight at the University of Georgia for three months, to Lambert Field in St. Louis, Missouri, for primary flight training, and then to Pensacola, Florida, for secondary and final flight training and instrument instruction. In October 1943, he was commissioned a Second Lieutenant in the U.S. Marine Corps.

Many transfers were in store for Millette, from Daytona Beach Naval Air Station for operational training in dive bombers to Terminal Island Naval Air Station in California, where he ferried new planes to air stations nationwide. He was assigned to join a fighter bomber squadron at Cherry Point Marine Air Station, where he met and married his wife, Sue. Soon after, Millette was sent to the South Pacific where he served in a Marine dive bomber squadron for about 14 months, seeing action in the Admiralty Islands, the Philippines, Okinawa and China.

In 1946, he returned to the states where he was detained for debriefing in California before he could travel to Ole Miss to apply for college. But missing the deadline, he enrolled instead at Wake Forest College in North Carolina.

“His brother Teddy Millette played football for Johnny Vaught,” Sam Jr. said. “And by the way, Sam, Sr. loves the Rebels and cheers for them in Oxford and Charlotte as long as they are not playing Wake Forest!”

In 1951, after graduating from Wake Forest Law School, Sam Sr. accepted a job in the legal department of Northeast Gas Transmission Co. in Springfield, Massachusetts.

Next, he and Sue returned to North Carolina to start a law practice in Charlotte. After practicing solo for eight years, Millette was invited in 1959 to join the law firm of Bell, Bradley, Gebhart & DeLaney as a partner. Twenty-seven years later, the firm dissolved, so he partnered with Robert G. Sanders for another 10 years prior to going solo again. The bulk of his work was in litigation in both criminal and civil court with many appellate cases.

“I could not have planned things better than the way they fell together by happenstance,” Millette said. “Mine has been a full life of marriage and parenthood, church and civic life, and a very rewarding professional career.”

Ken Cyree, dean of the School of Business Administration, said establishing an endowment, as the Millettes did, is one of the best ways to honor a beloved family member while also supporting a cherished institution like Ole Miss.

“We all have people in our lives whom we could honor in this way,” Cyree said. “I am thrilled that Sam chose to honor his father by designating his gift to support faculty recruitment for the School of Business Administration. Faculty support is a wonderful way to leverage a gift because it helps provide excellent educational opportunities for hundreds of students each year while giving them the opportunity to interact with the meritorious and outstanding faculty members who are supported by the gift. I am equally grateful for the Millette’s generosity and active involvement at Ole Miss through the years.”

The Samuel M. Millette Faculty Support Endowment in Business is open to gifts from individuals and organizations. To contribute, send checks with the endowment name noted in the memo line to the University of Mississippi Foundation, 406 University Ave., University, Miss. 38655; or visit www.umfoundation.com/makeagift.For more information on ways to support the UM School of Business Administration, contact one of the school’s development officers: Adam Lee at awlee@olemiss.edu or 662-915-1586; or Tim Noss at tlnoss@olemiss.edu or 662-915-5932.