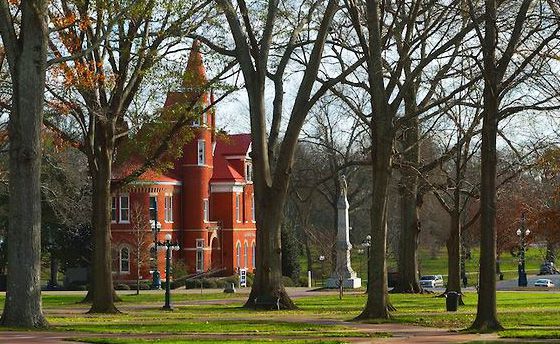 The Dorothy Lee Tatum (pictured below) Memorial Scholarship Endowment will support students in the College of Liberal Arts, headquartered in historic Ventress Hall.

An Oxford, Mississippi, native has established the Dorothy Lee Tatum Memorial Scholarship Endowment at the University of Mississippi to honor her mother and preserve her legacy in the community she loved.

The scholarship will be open to Mississippi natives who are full-time freshmen in the College of Liberal Arts.

“This generous gift is greatly appreciated and will help the College of Liberal Arts attract the best and brightest students to join the University of Mississippi family,” said Dr. Lee Cohen, dean of Liberal Arts. “Learning of the wonderful reciprocal relationship between Ms. Tatum and the college has reinforced the fact that we are a special place surrounded by special people.”

Dorothy Lee Hargrove Tatum died on August 20, 2015, at 91 years of age in her celebrated home, “Ammadelle,” which was designed by Calvert Vaux and built by Thomas E. B. Pegues in 1859. Vaux proudly included Ammadelle in the second and third editions of his book, “Villas and Cottages.” The Italianate mansion, located at 637 North Lamar Boulevard in Oxford, was declared a National Historic Landmark in 1974.

Tatum said her mother always enjoyed hosting guests who shared her interest in antebellum homes. Additionally, Ammadelle hosted the Oxford-University United Methodist Church Easter egg hunt for many years and was regularly toured by Faulkner and Yoknapatawpha Conference attendees from around the world.

“She was a true steel magnolia and belonged in Ammadelle,” said Tatum, a 1979 Ole Miss graduate. “Mom was very generous in welcoming people to the house. A long time ago, we were in the Oxford Pilgrimage.”

In May 1964, Oxford residents opened their antebellum homes for the inaugural Oxford Pilgrimage that continued for 22 years. The original pilgrimage consisted of seven antebellum homes that included Ammadelle, Fiddler’s Folly, Isom Place, Memory House, Lindfield, Cedar Hill Farm and Cedar Oaks. During subsequent years, 20 Victorian and antebellum homes – along with various churches and university buildings – were open to thousands of visitors.

“Oxonians are very proud of the beauty of Oxford and its homes,” Tatum said.

Dorothy Lee Hargrove was born on May 3, 1924, in Vanduser, Missouri. She, her husband John Tatum, and son, Johnny, lived in Clarkton, Mo., before making Oxford their forever home. In Oxford, the Tatums had five more children with Jean as the youngest.

Dorothy Lee Tatum was very involved with the town and community of Oxford as well as Ole Miss, where she was a member of the board of directors for the Center for the Study of Southern Culture.

“Mom loved going to the Center’s brown bag lunches and thought the world of Bill Ferris,” Jean Tatum said. “She and Vasser Bishop were both board members and had a wonderful time. They were dear friends and they loved traveling together across the United States and even overseas.”

Ferris, former chairman of the National Endowment of the Humanities and co-editor of The Encyclopedia of Southern Culture, is considered one of the foremost American authors and scholars of southern art. As it pertains to Oxford and its surrounding areas, he was the founding director of the Center for the Study of Southern Culture at Ole Miss and co-founded the Center for Southern Folklore in Memphis, Tennessee.

Bishop was a graduate and later a professor at Ole Miss. Her parents, the late Professor David Horace Bishop and his wife Mary Hartwell Somerville Bishop, are namesakes of the university’s Bishop Hall, completed in 1969, and of Somerville Hall, built in 1939.

Aside from sports, she is also an avid patron of music, movies and plays. Her late husband, L.W. Thomas, co-founded Oxford’s annual Ten-Minute Play Festival with Neil White in 1998. The festival, which launched in 2000, was created as a platform for local playwrights such as Thomas and White to showcase their talents and encourage community involvement. In its ongoing tenure, the festival has grown from a local treasure to a widely recognized event.

The Dorothy Lee Tatum Memorial Scholarship Endowment is open to gifts from individuals and organizations. To contribute, send checks with the endowment name noted in the memo line to the University of Mississippi Foundation, 406 University Ave., Oxford, MS 38655; or visit www.umfoundation.com/makeagift.