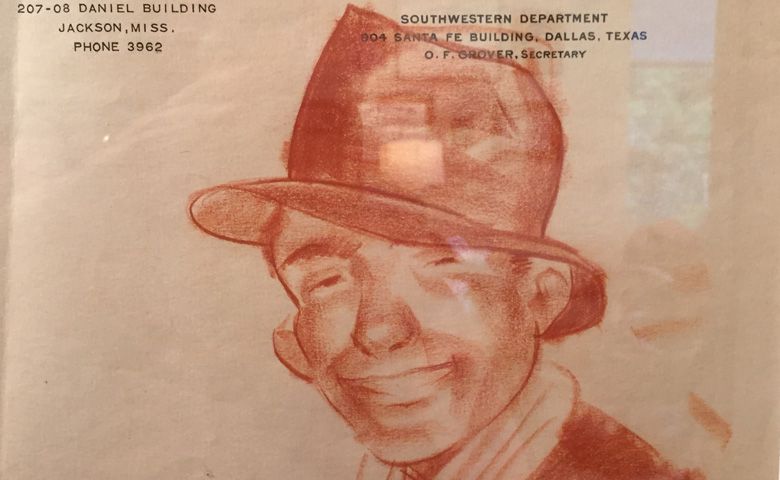 Self-portrait sketch of William Hollingsworth, namesake of an endowment recently awarded to the UM Department of Art.

William Hollingsworth had an innate love for art and a volume of work that belies his brief life.

“Hollingsworth is a fixture in the pantheon of Southern art,” said Hunter Cole, author of “William Hollingsworth: An Artist of Joy and Sadness.” Cole donated some 100 Hollingsworth artworks to the Lauren Rogers Museum of Art in Laurel, Mississippi.

Inspired by French impressionist painters Paul Cézanne (1839-1906) and Henri Matisse (1869–1954), many of Hollingsworth’s paintings depicted the lives of African-Americans in Jackson, Mississippi, during segregation. He also painted the Mississippi landscape, sunsets and sunrises and won prizes from the Chicago Arts Club, Southern States Art League and the National Watercolor Society. Nearly 300 of Hollingsworth’s originals were bequeathed to the Mississippi Museum of Art in Jackson, where they are included in the museum’s permanent collection.

“William Hollingsworth just had a capacity to render life in Mississippi – people and places in urban and domestic scenes – with great sensitivity. He also influenced many artists in his day and is still revered among collectors nationwide,” said Betsy Bradley, director of the Mississippi Museum of Art.

“When we have visitors who are not from Mississippi and who may even be international visitors, Hollingsworth’s work is one that really captures their attention. They always want to know more about him,” she continued. “He stands out because of the quality and skill he demonstrated as an artist.”

Tormented by frequent bouts of deep depression throughout his life, the prize-winning artist killed himself at the age of 34 before realizing his dream of becoming a recognized original. Upon her own death, his wife, Jane Oakley Hollingsworth, ensured his legacy of talent will continue as generations of University of Mississippi students receive scholarships bearing his name.

“Since his death, he has been rediscovered repeatedly as new appreciators are enchanted by his paintings,” Cole said. “The multitude of watercolors and oil paintings that he produced in the short span of a decade is an astonishing achievement. In select art collections, mostly in the South, his works are cherished as unique and masterly.”

Bradley agreed: “Had he lived and continued painting, his reputation would have only grown. He had already received significant awards for his work. He was about to turn the corner to really being recognized nationally when he died.”

With a $238,000 bequest from her estate, Jane Hollingsworth established the William Robert Hollingsworth Jr. Art Scholarship Endowment, which will provide financial support to full-time students in the UM Department of Art and Art History. This is the department’s largest private gift to date and will be awarded to students studying painting, drawing or sculpture primarily.

“We offer smaller scholarships in the amount of $500 and $2,500, but this is going to be really exciting because we can now offer a full tuition waver,” said Ginny Chavis, chair and associate professor of art. “We have never before been able to compete for students who may be eligible for higher scholarships elsewhere. Now, we will be able to attract some of the top art students in the country.

“This is an opportunity that we are so grateful to have,” Chavis continued. “We will be forever grateful to the Hollingsworth family for including us in this endowment. We know it’s very generous and an appropriate honor for William Hollingsworth because it seems so fitting to pass on the knowledge of art to another student and to keep that knowledge going. This is a way to carry his legacy forward, and we’re really happy to be a part of that.”

Liberal Arts Dean Lee Cohen echoed Chavis: “It’s rare that specific departments within the College of Liberal Arts receive private support, much less a contribution of this magnitude. We believe it will be game changing with respect to our ability to recruit the best and brightest art students. And that’s so important to our mission to be a great public university.”

Jane Hollingsworth would be pleased to know that her gift is appreciated, says longtime friend and legal counsel, Dan Singletary – an Ole Miss Law graduate who treasures a framed portrait of William Hollingsworth sketched on letterhead by the artist himself; the drawing is prominently displayed on the wall just outside Singletary’s office.

“Her bequest to the art department at Ole Miss was because of her love and adoration for her late husband, who had attended Ole Miss for a couple of years. He later honed his artistic skills at the Art Institute of Chicago, where he met and fell in love with Jane who was from Illinois,” Singletary said. “Because both she and William were art students together, and that’s the way they met, I believe she wanted to help young developing art students further their education and training in some meaningful way.”

Interestingly, an if-then stipulation in Jane Hollingsworth’s will might have kept Ole Miss from receiving the endowment at all.

According to Cole, Jane Hollingsworth’s hometown was Moline, Illinois, and her outlook was Northern; William Hollingsworth’s was decidedly Southern. However, drawn together in their discussions of art, they grew close, fell in love and married. A year later, their son Billy was born.

The late Billy Hollingsworth grew up in Jackson and inherited his parents’ talent for art. He was a cartoonist, a self-taught pianist with a gift for jazz improvisation and the lead performer in a dance band he founded. As a youth, he became an Episcopalian and, at age 24, he was received into the full communion of the Roman Catholic Church. At 27, he entered Saint Joseph Abbey in Louisiana and made profession as a monk.

“Should he leave a monastic life, all trust funds shall be paid over to him and the trust shall be terminated,” Jane Hollingsworth stated in her will. “If, at the time of his death, my son is still a member of the monastic order, I direct that the Trustee shall pay the then existing corpus of this trust over to an education institution in the State of Mississippi for the establishment of one or more scholarships in the name of my late husband for students of (art).”

Brother Anselm Hollingsworth – Billy – remained a monk until his death, leaving the door open for a Mississippi institution of higher learning to become one of the beneficiaries of his mother’s estate at a time when private support is critical to providing a margin of excellence in academics.

When UM graduate Kathryn Simmons, vice president and trust officer with Trustmark Wealth Management, realized that Jane Hollingsworth’s wishes were not specific to one institution, she contacted friends at the University of Mississippi to determine how Ole Miss could benefit from the bequest.

“The art department at Ole Miss seemed most appropriate since William Hollingsworth attended the university and also because Mrs. Hollingsworth specifically wanted to provide scholarships for art students,” Simmons said, adding that a portion of the bequest is also shared by the Mississippi Museum of Art, where it is being used to support a fellowship.

Individuals and organizations may make gifts to the Hollingsworth Art Scholarship Endowment or to other areas of the UM Department of Art by mailing a check with the designation noted in the memo line to the University of Mississippi Foundation, 406 University Ave., Oxford, MS 38655; visiting www.umfoundation.com/makeagift; or contacting Denson Hollis at 662-915-5092 or dhollis@olemiss.edu.