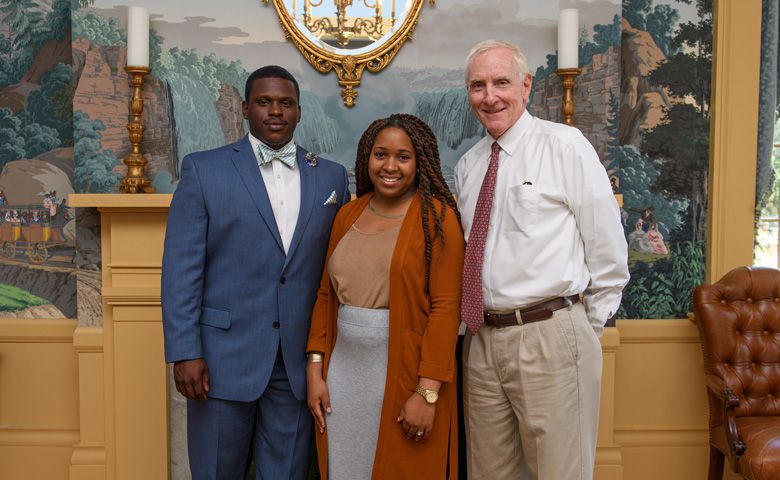 Just ask University of Mississippi alumni Derek and Kelly King about their students in the North Panola School District in Sardis, and the husband and wife team will light up with excitement.

As the instructional coach for North Panola High School (Kelly) and the assistant principal at North Panola Middle School (Derek), the Kings can personally name more than 710 students between their two schools this year—just ask them.

“Both of us love teaching and being in the classroom,” explained Kelly, who provides instructional leadership to more than 32 faculty members at her school. “Once you get into teaching, it’s really addictive. I’ve directly taught at least three-fourths (of those students) myself.”

The endowed scholarship is available to Teacher Corps alumni with at least three years’ of teaching experience in K-12 education and may be awarded twice to individuals. Recipients may pursue an advanced degree in any field of their choosing at UM’s Oxford campus.

Founded in 1989, the Teacher Corps has placed more than 630 new teachers in critical needs school districts throughout the state. The alternate-route teaching program is highly competitive and has attracted recruits from 216 colleges and universities around the country in its history. All participants receive job placement and two years of funding to earn a master’s degree in education from UM.

Derek and Kelly were selected for the honor by a committee of UM administrators within the School of Education and will each receive $1,500 per semester toward tuition throughout the next academic year.

“It’s an honor to receive anything with Dr. Mullins’ name on it,” explained Derek, who has also served as head coach for men’s track and football at North Panola. “I think (Dr. Mullins) is proud to see Teacher Corps people who are still working in education here in Mississippi. It’s an honor to just to be a small part of what he originally envisioned for the program.”

In addition to their full-time jobs at North Panola, Derek and Kelly—who met during their first year in the Mississippi Teacher Corps—are enrolled in UM graduate programs in K-12 leadership. Derek hopes to finish a doctorate within the next two years and Kelly will claim her second UM diploma next December when she finishes a Specialist in Education degree that will grant her a state school administrator’s license.

“It warms my heart to see this scholarship awarded to two such worthy recipients,” said Andrew P. Mullins, Mississippi Teacher Corps co-founder and UM’s former chief of staff to the chancellor. “They have both been valuable resources to the school districts in which they have served.”

As 2010 recruits for the Teacher Corps, the Kings came from very different parts of the country before joining the program and landing their first teaching jobs at Byhalia Middle School.

Kelly, a Boston native, received a bachelor’s degree in black studies from Amherst College, in Amherst, Mass. Derek, a native of Fairfield, Ala., earned a bachelor’s degree in psychology from Rhodes College, in Memphis, Tenn., where he played football and baseball and even began his coaching career as an undergraduate while working for Big Brothers Big Sisters and the Memphis Grizzlies Preparatory Charter School.

Back then, the Teacher Corps offered opportunity for the two aspiring educators to enter the classroom after college. After an intensive summer training program, Kelly took a job teaching social studies. Derek taught English and coached men’s track and football.

They did not however, expect that it would lead to a whole new life. After dating for four years, the couple found themselves both working at North Panola High School and soon married. There Derek and Kelly, alongside numerous other current and former Teacher Corps members, played key roles in the school’s drastic graduation rate turnaround. Between 2010 and 2014, the school increased its graduation rate by nearly 30 percent and rose from failing to B status.

“This is my sixth year in education,” said Kelly. “I have been able to see how Teacher Corps has transformed (North Panola) over the years. It’s as close as you can get to a ‘Teacher Corps School.’ There are several other Teacher Corps people at my school. One in her seventh year of teaching and one in her fifth, and before that we had other people who stayed at least four or five years. The program has made a strong lasting impact in that district.”

After their graduate studies, the Kings hope to continue pursuing opportunities in education. Kelly hopes to pursue a leadership position at the district level helping teachers develop and coordinate curricula and Derek hopes to one day serve as a full principal or perhaps a career in academic development for student athletes.

“When two people are doing graduate school at the same time it’s definitely a big investment,” said Derek. “So, it is amazing to receive this first scholarship. Any amount of scholarship helps, but to have one named after Dr. Mullins makes us both very proud.”

To make a gift to the Andrew P. Mullins, Jr. MTC Alumni Scholarship, send a check with the scholarship noted in the memo line to the University of Mississippi Foundation, 406 University Ave., Oxford, MS 38655; or online at www.umfoundation.com/makeagift. For more information contact Billy Crews, development officer for the UM School of Education, at 662-915-2836 or wlcrews@olemiss.edu.