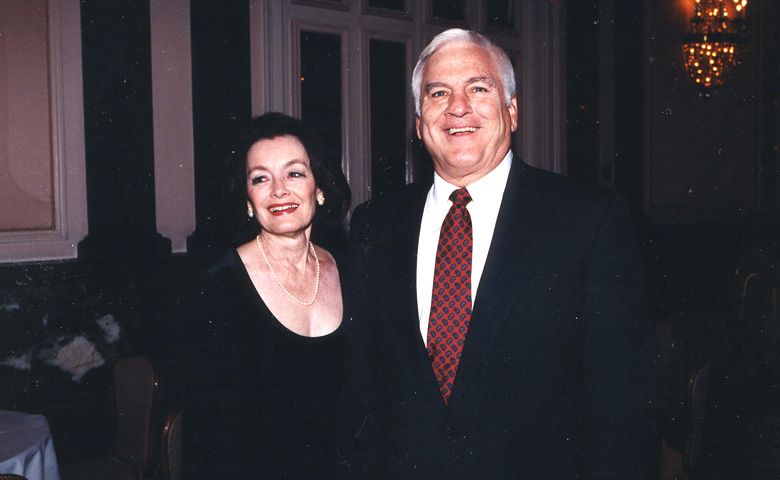 Charlie Flowers was one of the Ole Miss greats.

During his three varsity seasons as fullback under the iconic Head Football Coach Johnny Vaught, Flowers helped lead Ole Miss to a 28-4-1 record, which included Sugar Bowl wins over Texas and LSU and a Gator Bowl victory over Florida. He served as captain of the talented 1959 team that finished 10-1 and shut out eight opponents, while earning National Championship recognition from three different ratings systems.

The 6-foot, 198-pound Marianna, Ark., native finished fifth in the Heisman Trophy voting in 1959 and was considered one of the top running backs ever produced by the state of Arkansas. He was an Academic All American in 1959, but perhaps his proudest accomplishment was his family. He and his wife of 55 years, Sharon, had three children and eight grandchildren.

Flowers passed away on Dec. 7, 2014, but a scholarship fund established in his name will allow his legacy to live on at Ole Miss for generations to come.

“I’m encouraging our teammates and Charlie’s friends and fans to help expand his legacy at the university he loved,” said UM Chancellor Emeritus Robert Khayat. “Contributions to the Charlie Flowers Leadership Fund for Athletics will honor him every time our student-athletes receive scholarships.”

The fund stands at $3,500. To reach the endowment level and begin supporting student-athletes, the scholarship fund must hold a minimum of $25,000. The endowed funds will then be held permanently by the University of Mississippi Foundation with annual income directed to the scholarships.

“Charlie would be so proud to know that he is being honored in this way and he would be even more pleased to know that young athletes can benefit from the generosity of his peers,” said Sharon Flowers. “Charlie loved Ole Miss and he always gave credit to the University of Mississippi for much of his success. Now, through this fund, he can help others succeed and that would make him very happy.”

He was a consensus first-team All-America selection at Ole Miss in 1959 and also rated Academic All-America honors that same year, while also being named to the All-South team. In 1985, Flowers was honored by the Ole Miss Chapter of the National Football Foundation and College Hall of Fame with its Distinguished American Award.

Playing during an era when bowl games didn’t count in final individual or team statistics and eligibility was not granted to freshmen, Flowers led the SEC in rushing in 1957 and 1959 and in scoring in 1959. He gained 1,730 yards rushing during his three-year career, which was a school record at the time. His 5.64 yards-per-carry average was also a school record, and 55 years later, it still ranks third behind Dexter McCluster’s 6.4 average (2006-09) and Randy Baldwin’s 5.97 (1989-90). Flowers also earned National and SEC Back of the Week honors for his performances in Ole Miss’ wins over Arkansas and Tennessee in 1959.

Following his days at Ole Miss, he played professionally for the Los Angeles/San Diego Chargers and New York Titans of the American Football League before an ankle injury cut his career short. His AFL action saw him play in 28 games as he rushed for 416 yards and four touchdowns, while catching 35 passes for 383 yards and one TD that averaged 10.9 yards per reception.

For information regarding support of the Charlie Flowers Leadership Fund for Athletics, please contact Keith Carter at (662) 915-1929 or by e-mail at jkcarter@olemiss.edu. All gifts are tax-deductible and should be made to The University of Mississippi Foundation, 406 University Ave., Oxford, MS 38655 or make your gift online at www.umfoundation.com/charlieflowers.