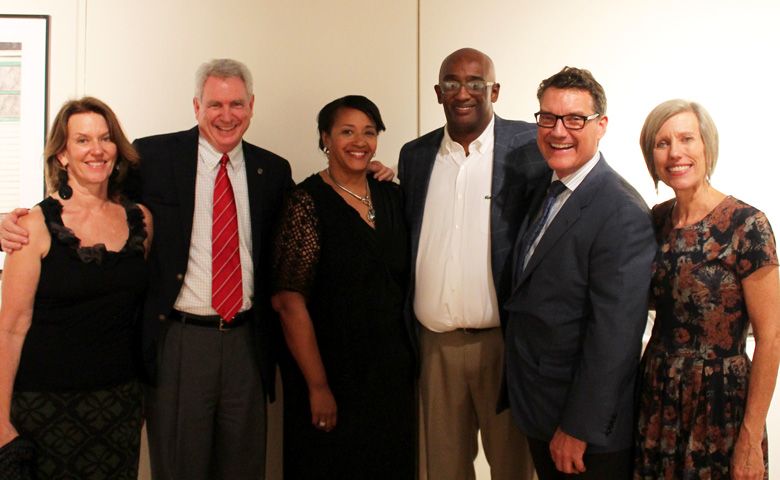 The University of Mississippi has a way of drawing you in.

Time after time, visitors to Ole Miss fall in love with its ambiance: the hospitable personalities of its people, the beauty of its majestic Grove and historic buildings, the palpable energy that radiates from its arenas and playing fields, the impressive significance of its arts and culture.

It was the latter that attracted Phil Swan and ultimately inspired him to offer financial support to both Rowan Oak and the University Museum, though his only connection to Ole Miss is a friend who invited him to campus.

Swan, who lives in Pasadena, Calif., is director of investor relations for Griffis Residential, a multifamily real estate investment company that owns and manages approximately 7,000 Class-A apartment units in Colorado, Nevada, Texas and Washington. He also happens to serve on the board of trustees for Colorado College, where he graduated with a bachelor’s degree in history in 1984.

“My connection to Ole Miss is through my good, good friend and Dean of Students at Colorado College, Mike Edmonds,” Swan said. “I first supported Ole Miss five years ago when I made a memorial gift to the Hattie Mae Edmonds Fund” – a fund established by Edmonds’ friends both at Colorado College and at Ole Miss to honor his mother after her death in 2010; the fund supports the University Museum.

Many UM alumni remember Edmonds, the gregarious assistant dean of students who worked in the late ’80s alongside Dean of Students Judy Trott and Associate Dean of Students Sparky Reardon. His passion and love for Ole Miss are as big and as infectious as his personality.

“Ole Miss means so much to me and provided such a wealth of opportunity,” said Edmonds who earned bachelor’s, master’s and doctorate degrees from Ole Miss in 1984, 1985 and 1990 respectively. “I’m excited to be able to see those same opportunities being created for current students.”

Swan likewise grew to love Ole Miss when he traveled with Edmonds to represent Colorado College at the official opening of the Hattie Mae Edmonds Gallery at the University Museum in 2010. He and Edmonds have since returned time and again to the Oxford campus, bringing family and friends to attend football games and enjoy the experience of pre-game revelry in the Grove.

Edmonds says he is humbled by Swan’s generosity: “Ole Miss is a very special place and Phil Swan is a very special man – one who understands and is committed to philanthropy and education and also one who appreciates quality. I’m humbled and I’m proud of Phil’s sense of philanthropy, his dedication and commitment to education and the arts. I’m overwhelmed and blessed by his desire to give to a place I’m proud to call home.”

Swan’s gift to the Hattie Mae Edmonds Fund helped finance the publication of the exhibit catalog for “Our Faith Affirmed: Works from the Gordon W. Bailey Collection.” The exhibition, which was organized and curated by Bailey, opened in September 2014 and garnered worldwide attention.

"We are grateful to Mr. Bailey for the opportunity to host this extraordinary exhibition which, with an 11-month run, became one of the longest the museum has had,” said Angela Brown Barlow, director of development for the Museum as well as the University Libraries and the Gertrude C. Ford Center for the Performing Arts. “It proves that the exhibits within our relatively small museum are of the quality that can attract donors like Mr. Bailey and Mr. Swan. Working with Phil has been one of my favorite donor experiences because of his deep passion for art.”

In 2013, Swan introduced his father to the university and enjoyed lunch at Rowan Oak while touring the historic home of legendary Southern folklore writer William Faulkner. He returned again in 2014 with his sisters and again in 2015 with three friends from California.

“(Curator) Bill Griffith conducted wonderful tours and dialogue each time. As a Faulkner fan, I fell in love with the place and the work Bill is doing there,” said Swan, who recently made a second gift to the University in support of Rowan Oak, where Colorado College incidentally sponsors an annual class on Faulkner’s work. “I hope my gift will help take care of some of Rowan Oak's most pressing preservation needs.”

Griffith said Swan’s gift was used to buy much-needed tools for the daily maintenance of the world-renowned landmark.

“As you can imagine, with an old house like this, things break every day,” Griffith said. “Phil is a very observant person. He saw me struggling with some of the projects out here. They’re not big enough to hire a contractor, but if you want to do it right, you really need the right tools. And these are things we will use for years and years to come.”

“Unrestricted gifts between $1,000 and $5,000 are my favorite gifts because I can really do something with them,” he said. “When Rowan Oak receives an unrestricted gift, it enables us to jump on a project right away. For example, we are currently doing a major renovation to a part of the house that was closed. Having these tools will allow us to do the work ourselves and get the project done quickly. Basically, gifts like this allow us to achieve better stewardship to our property.”

Individuals and organizations can make gifts to support Rowan Oak or the University Museum by mailing a check with the designation noted in the memo line to the University of Mississippi Foundation, 406 University Ave., Oxford, Miss. 38655; visiting www.umfoundation.com/makeagift or contacting Angela Barlow, development officer, at 662-915-3181 or ambarlow@olemiss.edu

For additional information about the "Our Faith Affirmed: Works from the Gordon W. Bailey Collection" visit http://museum.olemiss.edu/our-faith-affirmed-works-from-the-gordon-w-bailey-collection/