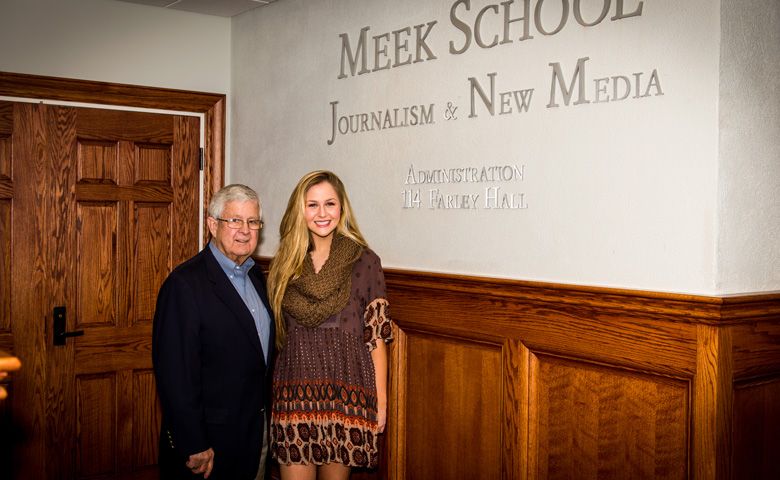 Ed Meek, namesake of the Meek School of Journalism and New Media, congratulates Lindsly Penny of Hernando, Miss. -- this year's recipient of the Clay and Krista McFerrin Sun-Sentinel Scholarship.

Ed and Becky Meek, namesakes of the Meek School of Journalism and New Media at the University of Mississippi, established the Clay and Krista McFerrin Sun-Sentinel Scholarship to pay tribute to community newspaper editors and help students launch successful journalism careers.

This year’s scholarship recipient, Lindsly Penny of Hernando, Mississippi, says the award has given her a strong start toward that goal.

“All of the money that I was given was put towards my tuition bills and has helped tremendously with furthering my education,” Penny said. “I am very interested in the paths that those before me took to success, and I look forward to learning from the writing and education of writers like Dr. Meek and other such journalists.”

In addition to writing, Penny’s passions include reading and theatre. In high school she was active in the National Honor Society, National Thespian Honor Society and National Spanish Honor Society. She also served on the Hernando Mayor’s Youth Council and was selected as a Commercial Appeal academic all-star.

Now a scholar in the university’s Sally McDonnell Barksdale Honors College and a student in integrated marketing communications, Penny plans to pursue a career as a manager of social media accounts or as a public relations professional after her 2019 graduation. She is active in Phi Mu sorority, participates in Reformed University Fellowship, and plans to serve as an Ole Miss orientation leader this summer.

Penny has great appreciation for fellow professionals in the field of journalism and says she’s grateful to be the scholarship’s recipient as she learns the trade and sculpts her own career.

Likewise, Meek has a great respect for journalists, which inspired him to create the scholarship and speaks to his own beginnings.

“I always wanted to be a weekly newspaper editor and have a great appreciation for those who serve in this role,” said Meek, who named the scholarship for his longtime friends, the McFerrins, who publish the Sun-Sentinel in Charleston, Mississippi. “I am particularly proud of Clay and Krista who work very hard, love our community and provide great leadership to the community we all love.”

Meek, who refers to the Sun-Sentinel as the best small-town weekly he knows, joined the paper in the seventh grade in 1953 when it was then known as the Mississippi Sun. With only a few others on staff, he was a “printer’s devil,” he recalls, doing anything and everything for the paper as requested by his superiors.

During his junior year in high school, after the senior publisher had fallen ill, Meek stepped up to help run the paper. While attending East Tallahatchie High School, he worked every afternoon until 11 p.m. on Wednesdays when they put the paper to press, Saturdays and full-time in the summer before resigning to continue his journalism career at Ole Miss. In college, Meek worked for the weekly campus newspaper – the predecessor to The Daily Mississippian.

“My years at the newspaper gave me much more. It gave me a career in journalism, which has blessed our family throughout our lives,” Meek said.

At Ole Miss, while contributing to several publications as a free-lance writer, Meek worked alongside the late Larry Speakes who eventually became a White House press spokesman for President Ronald Reagan from 1981 to 1987. Meek next took on a full-time position as an employee of the Ole Miss public relations department while completing his graduate degree.

Two years later, at age 24, he became UM’s youngest-ever department head and helped shape the university’s image for 37 years as an assistant vice chancellor for public relations and marketing and associate professor of journalism. He later started a successful publishing business and now runs the popular website HottyToddy.com.

Thanks to a $5.3 million gift from Meek and his wife, Becky, in 2009, the university’s journalism department became the Meek School of Journalism and New Media, which boasts one of the fastest-growing enrollments on campus. Degree programs – the Bachelor of Arts, the Master of Arts and the newly offered Bachelor of Science in Integrated Marketing Communications (with 38.6% growth this year alone) – give students the opportunity to understand the changing role of journalism from many perspectives while developing the multimedia and intellectual skills necessary to succeed in the media industry.

Students also have the opportunity to immediately apply the skills learned in the classroom by gaining paid experience at the S. Gale Denley Student Media Center, where Meek School students can be published in The Daily Mississippian or The Ole Miss yearbook, gain on-air experience by reporting for NewsWatch or Rebel Radio, or get a glimpse of the business side of journalism by working for the student-run advertising division.

Additionally, students can gain hands-on experience, working for HottyToddy.com and Experience Oxford magazine – each of which the Meeks established to support the journalism school and its students. Last year, the publications hosted 24 interns. HottyToddy.com averages 1.8 million readers and its Facebook site reached a record 2.4 million during the week of the Ole Miss-Alabama football game.

For more information about providing support to the Meek School of Journalism and New Media, contact Jason McCormick at 662-915-1757 or jason@olemiss.edu.