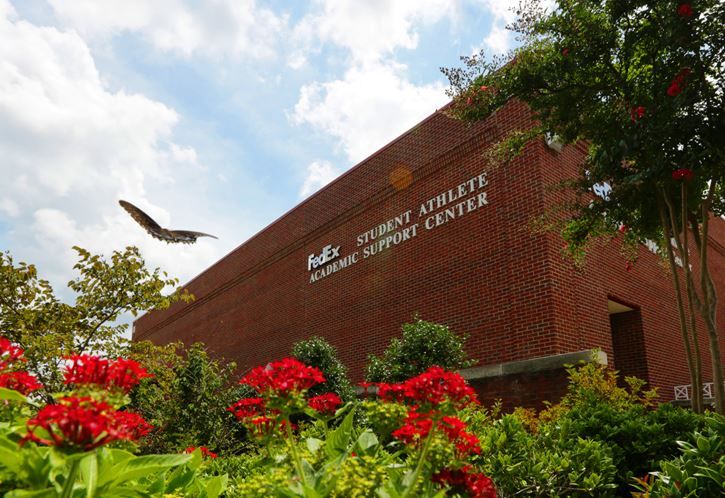 The FedEx Student-Athlete Success Center is a 24,500-square-foot building, which currently houses all aspects of student-athlete development in the athletics department.

A gift from FedEx Corporation will help University of Mississippi student-athletes succeed in the classroom and beyond.

The company recently donated $2.5 million to Ole Miss Athletics to enhance the existing FedEx Student-Athlete Success Center. In addition to the FedEx gift, an anonymous donor has contributed $2.5 million for a total of $5 million to support the center.

“We are extremely grateful for these major gifts, which will enable us to construct additional one-on-one tutoring rooms, small group and large group tutoring rooms and counselor and student lounges within the FedEx Center,” said Ross Bjork, director of athletics.

“At FedEx, we’re all about connecting people and possibilities around the world,” said Mike Glenn, executive vice president of market development and corporate communications for FedEx Corporation and a 1977 graduate of the UM School of Business Administration. “We believe one of the most important connections is the one between a quality education and a successful career.”

The FedEx Student-Athlete Success Center is a 24,500-square-foot building, which currently houses all aspects of student-athlete development in the athletics department. The facility includes academic counselor, learning specialist and life skills offices, a large conference room, 12 large and small group tutoring rooms, two large MAC and Dell computer labs and a micro study lab area, a math and writing lab, and a 150-seat multimedia classroom called the FedEx Auditorium. The facility is equipped with more than 150 computers and laptops which help drive student-athlete success.

“Our student-athletes are expected to put in the hours and hours of practice it takes to be successful on their respective teams while also keeping their grades high, so they can be successful in life after collegiate sports,” Bjork said. “The center gives them a home base where they can study and receive any academic and life skills support they may need.”

To learn more about the Forward Together campaign and the Vaught Society, contact Keith Carter at jkcarter@olemiss.edu or call 662-915-7159.