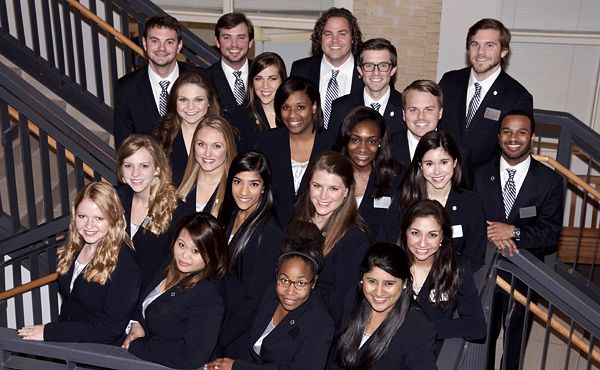 Like many other students, Meagan Henry decided to go to medical school so she could serve others one day. Chances are, she didn't know she'd also be serving pizza.

As one of UMMC's newly-minted Student Alumni Representatives (STARS), she has done that, but that's only the beginning. Besides dishing up meals for their fellow students at campus events, nearly two dozen STARS from all six professional schools here have welcomed visiting alumni and donors, promoted pride in UMMC, furthered the cause of teamwork and more.

“STARS gives medical students a unique way to learn what practicing medicine looks like,” said Henry, an M2. “We are motivated, and usually entertained as well, by the stories we hear from people who were once in our shoes but have done so much since.”

Apparently the only organization of its kind at the Medical Center, STARS began to come out in the spring under the guidance of April Overstreet, director of alumni affairs, and Dr. Mignon Chinn, alumni engagement associate, who took it on as her first major project following her arrival here in February.

Former Associated Student Body president Peter Mittwede, an M.D./Ph.D. candidate representing the School of Graduate Studies, said he applied to STARS, in part, because of Overstreet's and Chinn's “passion” for the project.

“I wanted to help highlight some of the many things the Office of Alumni Affairs does for students and which most of us are unaware of. Also, it's important for students to hear about the successes of alumni and to receive mentorship from them.

“The STARS will help pave the path for these relationships to form and grow.”

So far, reviews from other STARS have been as positive.

“We are definitely learning more about the other professional schools at UMMC, much more so than I think I ever would, had I not been affiliated with STARS,” Henry said. “Because we're a team of students from many different schools, we bring to our group a variety of skills, connections, and knowledge.

“And the alumni love giving advice on how to cope with school.”

Alexa Lampkin, who will graduate from the School of Dentistry in 2017, has been able to polish her communication and other professional skills after “crossing paths with some renowned donors, administrators and other representatives of UMMC,” thanks to her involvement with STARS.

STARS builds a sense of community among the schools, said, Brittany Cavett, a second-year School of Nursing student. “I wanted to be part of an organization that demonstrates UMMC pride and showcases diversity between all the different disciplines here.”

Kandis Backus, who, as all pharmacy students do, began training on the Ole Miss campus before entering UMMC's School of Pharmacy in Jackson, said, “I knew it could be harder to integrate into campus life as a student coming here from the Oxford campus.

“I wanted to help people feel welcome, and to interact with other students,” said Backus, a third-year student. “That's why I joined STARS.

One of those OTs is Caroline Campbell, a third-year student representing the School of Health Related Professions , who said STARS “gives you a different perspective beyond the classroom and books.”

While student-ambassador programs are not rare – in Oxford, Ole Miss is talked up by members of the select Columns Society – they aren't that common at academic medical centers, Overstreet said. And, while like-minded initiatives exist at UMMC within certain schools, STARS is the only one that embraces all of them.

“You don't see many groups made up of students from across the academic spectrum anywhere,” Overstreet said.

She has witnessed first-hand how a student ambassador program can benefit students and alumni alike. A graduate of Mississippi State University, she was an Alumni Delegate there. “It had an impact on me,” she said.

That impact – the pride she experienced while promoting the university – inspired her to start alumni chapters later in Florida and North Carolina when she worked in those states.

But that wasn't the only motivation for starting STARS. “In the spring of 2014, a focus group of students expressed an interest in connecting more frequently with alumni,” Chinn said.

“The STARS can see themselves as future alumni board members. And the program allows us to put our cream-of-the crop students out there to let alumni know about UMMC.”

When Chinn and Overstreet began recruiting prospective STARS in the spring, 34 applied. “We're looking for students who have a passion for service,” Mignon said.

“They must have been here at least a year and have demonstrated pride in UMMC and an interest in getting to know alumni and meeting with donors.”

Of those candidates, 22 made the cut. Depending on the type of event, they wear their more professional “uniform” – navy suit jacket for all, silver blouse for women, silver-and-blue striped tie for men – or the less formal blue polo shirts.

So far, STARS have been spotted at a luncheon for the student-giving campaign, “It Begins with U,” where Henry dispensed pizza; employee retirement events; UMMC High School Visit Day; a SHRP senior luncheon and more.

STARS participants from the medical school have been able to commune with School of Medicine graduates on such occasions as the Medical Alumni & Friends Awards Dinner and the Medical School Class Reunion Weekend; but alumni events for most of the other schools will blossom in the spring.

Campbell, the OT student, is looking forward to meeting SHRP alumni who can give her a glimpse of her future, as she helps them recall their past. She's had a taste of that already, as an undergraduate at Mississippi State, where she was part of Maroon VIP, a STARS-like group.

“Any time I met the alumni there, I saw the look in their eyes when they were reminiscing,” she said. “I would like to help replicate that look here.”

Click here for more information on giving to the University of Mississippi Medical Center.