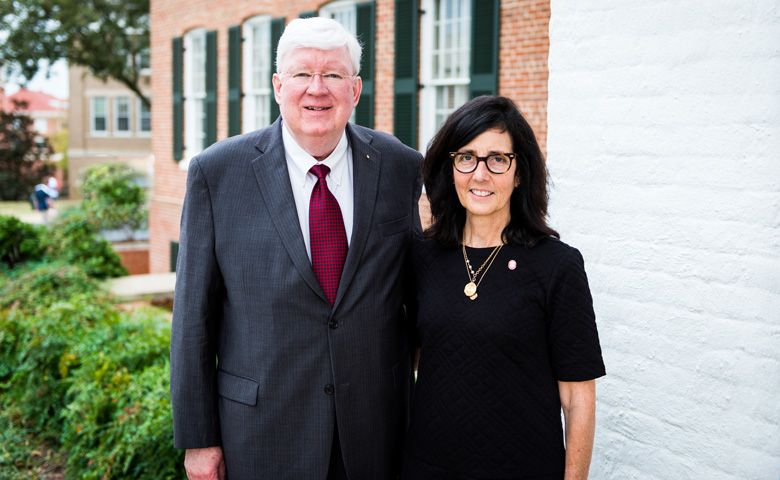 Dr. Bob and Mary Ellen Warner always manage to find a way to serve others — even on vacation.

“Herb, Dixie, Mary Ellen and I had a little routine,” Bob Warner said, referring to Herb Dewees, former Ole Miss Alumni Association executive director and his wife, Dixie. In the mid-1990s, the couples frequently traveled together to northern Europe on Alumni Association-sponsored trips. “When we got to a new hotel, we’d help everyone with their luggage and some Ole Miss alumni, particularly the ladies, had several bags, to say the least. So we would unload the luggage and get everyone settled and then sneak away to get a pizza wherever we were in the world.”

The Warners say it’s the experiences they had and relationships they built through the Alumni Association that inspired them to create the University of Mississippi Life Member Endowment with a $1 million planned gift.

“Bob and Mary Ellen are two of the kindest, most genuine people I’ve had the pleasure of knowing. We greatly appreciate their involvement in the Alumni Association through the years and their amazing generosity,” said Sheila Dossett, interim executive director of alumni affairs.

Bob Warner received a biology degree from Ole Miss in 1979 and his medical degree four years later from the UM School of Medicine. Now a general, thoracic, vascular surgeon at Arkansas Methodist Medical Center in Paragould, Ark., he has been a practicing physician in Northeast Arkansas for over 25 years. He became the first surgeon in his region to perform minimally invasive abdominal aneurysm repairs among other innovative vascular procedures.

“Our experiences with the Alumni Association have made us realize that the university has a depth and a breadth that reaches, really, across the world,” he said. “I look at my life and say, ‘What’s made my life where I can do some of the things I’ve done and have some success at it?’ and Ole Miss is just in the forefront of my mind. So we asked ourselves, ‘What can we do to be sure other people have that same opportunity?’ And I think it’s the idea that you want to give back so other people can have the same experiences.”

Those experiences include the career paths Bob and Mary Ellen, a 1979 nursing graduate, chose to pursue — professions in which the top priority is caring for others. In fact, they met as students at the University of Mississippi Medical Center where Mary Ellen was a cardiac nurse and Bob was a cardiovascular surgery resident.

“… He was like a mentor to me,” Bob interjected.

“Yes, everybody was just crazy about him, and I used to take care of his patients,” Mary Ellen continued. “He was the only cardiac surgeon in the state who would operate on children with really high risk, congenital defects. Caring for these children presents a lot of challenges, so it really makes you grow as a person and then the nurses you work with … it’s a family. You just don’t ever forget those things.”

In an effort to help others have a similar UMMC opportunity, the Warners have established the Dr. and Mrs. Robert L. Warner, Jr. University Medical Center Scholarship Endowment in addition to their designated gift to the Alumni Association. This gift, valued at $700,000, will support a UM School of Medicine student for up to three years and a School of Nursing student for up to four years.

“We are so grateful to the Warners for recognizing that supporting our students is an investment in the health of generations to come. We are fortunate to have alumni like these who care deeply about the University of Mississippi Medical Center,” said Dr. LouAnn Woodward, vice chancellor for health affairs and dean of the School of Medicine.

In addition to the Warners’ gifts to UMMC and the Alumni Association, they have also designated $400,000 to establish the Dr. and Mrs. Robert L. Warner, Jr. Scholarship Endowment, which will benefit UM students from Hinds County, Miss. (Mary Ellen’s home), and from Hancock and Harrison counties — coastal Mississippi, where Bob was born and raised.

After graduating from medical school and getting married, Bob considered returning home to Bay St. Louis, Miss., to begin his career but the opportunity wasn’t there. Instead, the Warners established a cardiac surgery practice in Jonesboro, Ark. — just two hours from their beloved Ole Miss.

“Everybody in my family got their college degree from here: my mom, my dad, my uncle, my aunt, my cousins, their kids… so my first time at Ole Miss was when I was two or three years old because my dad had been in the Army and came back here to go to the School of Engineering. My mother had already graduated from here, so my first visit to Ole Miss was as a toddler,” Bob said. “I’ve been here since I was born really.”

Mary Ellen’s ties to the university are equally strong. Her late father, Dr. José Bebin, served UMMC as professor of pathology, and her sister, Dr. Martina Bickley, is a pediatric neurologist who earned her medical degree there. Mary Ellen’s mother, Patricia, was instrumental in procuring many pieces of art for the UMMC library.

Bob says his interest in serving others is inherited from his parents: “My mother was a school teacher; my father was an engineer. I wouldn’t say we were poor … I would say they worked hard, and a lot of times they put my needs ahead of everybody else’s. I think that taught me that you have to be a little bit generous. They set a good example about that.”

Bob’s parents are graduates of Ole Miss and his father, who has a deep appreciation for the School of Engineering, has also made a gift to the University of Mississippi Foundation as a tribute to the education he received.

The Warners are, by nature, humanitarians, finding satisfaction in improving the lives of others, both at home and abroad. Bob recently traveled to northwest India, where he joined a team of 42 medical professionals tasked with immunizing children in the region. Over a three-day period, teams immunized about 75 million kids.

“The main thing you’re doing is giving support to the Indian public health workers to let them know that somebody else in the world cares about what they’re doing,” Bob said, adding that they have taken similar medical mission trips to Romania and Burma.

After moving to Jonesboro, Mary Ellen worked part-time as an intensive care nurse and taught nursing at Arkansas State University while Bob worked as a cardiac surgeon. They also are among the original volunteers for a church-associated health clinic in Jonesboro.

“We have our own little medical practice,” Bob said. “We see patients of all kinds at that charity clinic and we’ve been doing it for 20 years.”

Mary Ellen retired from the ICU and from teaching, but she continues to volunteer at the clinic. She has served as a board member on the Hispanic Community Service Inc., which is non-profit organization that helps Hispanic immigrants become self-sustaining in the United States. In this capacity, she has most recently poured her heart into one particular family.

“I’m going to tell you more than she would,” Bob interjects. “So this is a family that had been separated from their mother and some of the siblings for 13 years and through this incredible effort …”

“We worked with an immigration attorney in Memphis, and Mary Ellen filled out all the paperwork and helped guide them along,” Bob continued. “The dad became a citizen (he was already here on a visa) and by him becoming legal, the whole family got to be legal and was able to reunite.”

“Well, I was just determined, I wasn’t going to take ‘no’ for an answer,” Mary Ellen said. “It was just a long, long journey and for someone who doesn’t really understand the path and who can’t communicate on that level, it can be too challenging.

“I was just their mentor,” she says. “The greatest gift is to see them together with their mother.”

Bob agreed: “It’s something that no one can ever take away from them. They’re safe now and they can work in this country and have a life. It’s pretty special.”

The Warners’ planned gift gives them membership in the 1848 Society, named for the year the university opened the Lyceum doors to its first students. The society recognizes generous donors who thoughtfully provide for the university through planned and deferred gifts.

For more information, interested individuals can call Sandra Guest, vice president of the UM Foundation, at 800-340-9542 or 662-915-5944, or visit www.umfoundation.com/planning.