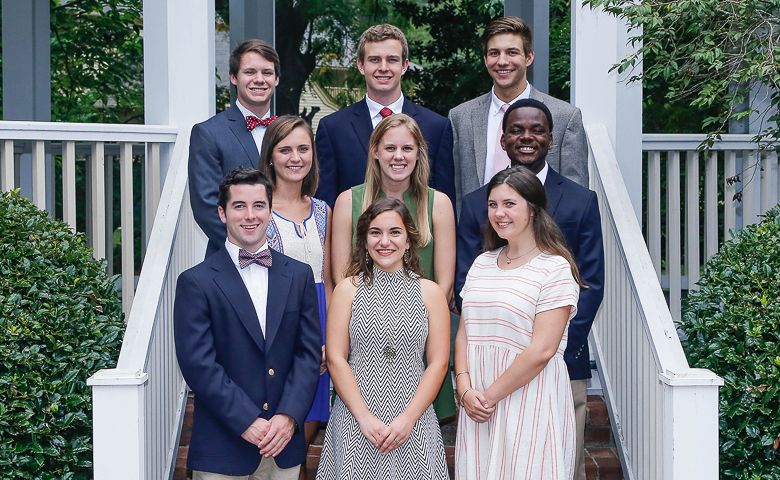 The Croft Institute for International Studies at the University of Mississippi has awarded full scholarships to 10 exceptional students, eight of whom are members of its largest freshman class ever.

Freshman Croft Scholarship recipients receive $8,000 per year for four years, a total of $32,000, which may be combined with other scholarship support. Between 15 and 20 applicants are interviewed annually by a five-member, Croft-affiliated panel. Interviewees are asked the same round of questions that range from current global political issues to students’ personal interest in the international studies major. Winners are chosen based upon their answers.

“This cohort is unique in a lot of ways, but the fact that we enrolled our largest Croft cohort to date, as well as increasing our average overall ACT to 30.845, was exciting,” said Will Schenck, Croft Institute associate director. “Previously, we have had 60 students, but now we have an incoming class of 71 total students, which is an increase of 18 percent. Also, 55 percent are in-state and 45 percent are from 16 different states.”

All the students selected were extremely involved in several different high school organizations. Each one held at least one type of leadership role in some capacity – whether it was a sports team, an academic club or a school student council.

“After an intensive application and interview process, we selected an outstanding crop of students for 2015-16,” said Kees Gispen, executive director of Croft Institute. “Each student selected was heavily recruited by top-ranked academic institutions.”

Here’s a closer look at each of this year’s Croft scholars:

A graduate of Siegel High School, Bass was a class representative for the Student Council, a project leader for Key Club and a member of the Excalibur National Honor Society and Beta Club. She also led a nonprofit organization called Sustaining a Village Everyday.

“We raise money by hosting events in our area and use the money to do sustainability work in a village in Haiti called Boukeron,” Bass said. “We travel there each summer to communicate with the villagers and assess their needs.”

The main reason Bass, daughter of David and Michele Bass, wanted to be in Oxford is because of the Croft Institute.

“I have always been very interested in other cultures and international work,” she said. “The Croft Institute is an amazing program that I feel confident will allow me to achieve my goals and dreams in this field. The people of Ole Miss also worked with me to find scholarships that made coming here an easy choice.”

After graduation, Bass hopes to attend graduate school for social work or psychology. “I would love to use the knowledge I gain from the Croft Institute to move to another country and work with an organization that rescues and rehabilitates victims of sex trafficking,” Bass said.

“I decided to attend Ole Miss ultimately because the Croft Institute seems to have a warm and inviting, yet challenging, spirit about it, and that is exactly what I was looking for in a college,” Benson said. “I chose the international studies major with a concentration on Latin American countries and the Spanish language because I wanted to learn more about the world around me.”

The son of Patrick and Regina Benson, he plans to attend graduate school and hopes to pursue a career in the Department of State as a foreign service officer.

A graduate of the Mississippi School for Mathematics and Science, Bruce was a Hall of Fame member, a Spirit of MSMS award recipient and an emissary.

“After all my college searching, Ole Miss was the best fit,” said Bruce, an international studies and Spanish major who is minoring in business administration. “The Honors College was one of the best I encountered and the Croft Institute for International Studies tied together several of my interests.”

After graduation, Bruce, daughter of Mike and Faye Bruce, is considering earning an MBA.

“I am interested in the fair trade movement and would love to have a career regarding alternate, more transparent ways of conducting international business,” she said.

Finishing from Albuquerque Academy, Chappell was most involved in Model United Nations, speech and debate, and Model International Criminal Court. A National Merit Finalist and a track and field athlete, he was an AP Scholar with Distinction in world history, U.S. history, comparative government, microeconomics and macroeconomics.

“I am double majoring in Arabic and international studies,” said Chappell, who studied the language in high school and would like to reach native speaker proficiency. “After graduating, I intend to pursue a master’s degree. I am unsure as to what I would like to do for a career, but some areas of interest are foreign policy, intelligence, diplomacy and work for an intergovernmental organization or NGO.”

Chappell is the son of Cael and Mary Chappell.

Colbert, Amory High School valedictorian, served as the student body president and state president of the Family, Career and Community Leaders of America. He was also involved in Amory Students for Change, the National Honor Society and National Spanish Honor Society. The son of Kerry Colbert and Jim and Holly Reeves, he was a STAR student and a National Merit Finalist.

“My decision to attend Ole Miss was rooted primarily in scholarship opportunities and in the relationships I had with many members of the faculty,” he said. “I am double majoring in international studies and Spanish because of my love for Spanish and because of my attraction to politics.”

Upon graduation, Colbert plans to attend graduate school, either in the Northeast or at the University of Oxford in England, and later pursue a career in immigration law.

The Boyd-Buchanan School valedictorian, Gambrell played football and soccer and wrestled. An actor in four musicals, he also served as co-president of both the student body and student council and was charter president of the Junior Civitan Club. Gambrell held memberships in the National Honor Society and National Spanish Honor Society and earned class awards in AP Biology, current events and modern history, government, economics, AP statistics, honors pre-calculus and AP world history.

“I received the school Service Award, Ronald Reagan Citizenship award, the AP scholar with distinction and was voted Most Likely to Succeed,” he said. “My highest achievement was setting the school record for the physics class trebuchet competition at 127 yards.”

After being impressed by Croft and the Honors College, Gambrell, son of Tim Gambrell and Jim and Jennifer Owens, applied and made plans to visit in January.

“At my visit I fell in love with the campus,” Gambrell said. “It was definitely the most beautiful I had seen. And to seal the deal, the university gives great financial aid. I really felt like I was properly rewarded for all of my hard work in high school. Ole Miss is the place for me.”

Gambrell said his future plans are to work for the U.S. State Department and someday be an ambassador, but recently he’s had more of a desire to work for an NGO and help people around the world more personally and hands on.

“I want to go to grad school and get my master’s, and possibly even pursue a doctorate depending on my career aspirations at the time,” he said. “After I retire from international service, I wish to teach social studies and coach at a high school.”

A DeSoto Central High School graduate, Herring started a speech and debate club, was president of the Model United Nations Club and won either a speaking or writing award at every tournament he attended. He was the captain of the school’s News Channel 3 Knowledge Bowl team, which made it to the semifinal round – the farthest in school history – in the annual, televised tournament.

The son of Tom and Shannon Herring, he was also vice president of the Mu Alpha Theta mathematics honor society, played varsity football and soccer, and was selected for the all-county soccer team.

“My older sister, who was also a ‘Croftie,’ and several of my teachers were instrumental in my decision to attend the University of Mississippi,” Herring said. “Her experience is what first inspired in me a vision for the international studies program through Croft. It matched perfectly with my desire to study abroad and my interest in the German economy.”

Herring plans to graduate with degrees in German, international studies and economics. After graduation, he would like to work as a financial analyst in the United States or abroad.

Holton, a Plano West Senior High School graduate, was devoted to Key Club and the French National Honors Society. A National Merit Scholar, she received a scholarship through the National Security Language Initiative for Youth to study Korean in Seoul, South Korea, for six weeks.

“Ole Miss offers great programs in my chosen areas of study, Chinese and international studies,” Holton said. “I’m considering pursuing a career within the intelligence community, in organizations like the CIA or NSA. Such a job would allow direct application of the international relations topics I will be studying, as well as the opportunity to continue developing language skills.”

Holton is the daughter of Steven and Joyce Holton.

“I think I knew Ole Miss was my school when I discovered the Croft Institute,” Marquez said. “Suddenly, the horizons broadened, and it was possible for me to get the best of both worlds throughout my college experience: Mississippi, and then the rest of the world.”

Marquez’s plans are to attend medical school and work in pediatrics. “Ideally, I would like to serve lower income areas; possibly somewhere that has the need for a French-speaking doctor,” she said.

A Picayune High School graduate, Smith just finished her first year at UM, where she was involved in International Justice Mission, Honors Senate and More Than a Meal. She received the Omicron Delta Kappa Freshman Leader Award and is a member of Lambda Sigma honor society.

“I decided to attend Ole Miss because, frankly, I love Mississippi,” said Smith, an international studies major with an emphasis in Latin America. “The Honors College and Croft Institute are both comparable to Ivy League and top-tier schools, and I couldn’t pass on the opportunity to be a member of the Ole Miss family.”

After graduation, the daughter of Tony and Angie Smith hopes to earn her doctorate in sociology.

“I’d either like to work in a nonprofit or to teach at a university while simultaneously conducting research,” she said.

For more information about the Croft Institute, visit http://www.croft.olemiss.edu/home/.