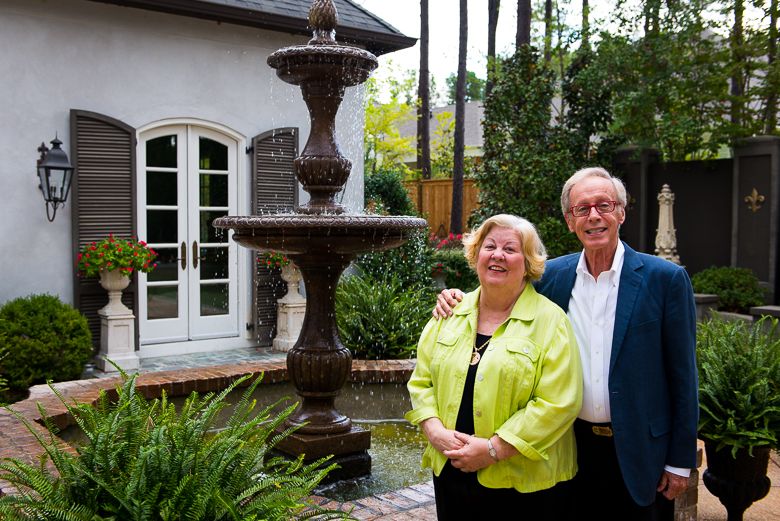 Eddie and Linda Hayward have designated a generous planned gift in support of scholarships for members of the Pride of the South Marching Band.

When Eddie and Linda Hayward remember good times at the University of Mississippi, those memories almost always include the band.

“I remember the glorious days of going down to the Peabody Hotel with the band coming in and the two-story lobby just swelling with the energy of that big pep rally,” said Eddie Hayward of Ridgeland, Miss.

He and Linda lived in Memphis at the time and were able to enjoy many Ole Miss pep rallies together. Both originally from Grenada, Miss., the Haywards married two weeks after their 1965 graduation from the university. They immediately moved to Memphis, where Eddie took a job with Union Planters National Bank and Linda with the University of Memphis (then Memphis State University).

Four years later, Eddie began working for Tayloe Paper Company as credit manager, a position he held for about 16 years before buying a flower shop, Southern Hospitality Flowers and Fine Gifts, which he built into a lucrative business over the next 25 years. Throughout their time in Memphis, Eddie was active in the Memphis Rebel Club.

“I contacted the band director at Ole Miss, David Willson, and I said, ‘I would love to get 20 or so band students up here as a surprise element and we’ll make an appeal that night to the Rebel Club audience for contributions.’ So he agreed to it,” Eddie recalls. “So they were tucked away and at some point in time, it was, ‘Ladies and gentlemen, we have a delightful surprise for you’ and the band burst through the door. Well, the crowd just went wild, jumped up, hollered. That was a cold-chill moment. And I enjoyed that.”

Willson remembers that day well: “When I met Eddie and Linda, I could tell they were a class act, gentle, but well spoken. They told me then they were going to leave a gift to the band and they were true to their words. We greatly appreciate the Haywards’ generous gift.”

The Haywards have designated a generous planned gift to establish the Eddie and Linda Hayward Pride of the South Marching Band Scholarship Endowment.

“Eddie is very much into the ambiance of any event, be it a wedding that he was doing as a florist or a football game or whatever it may be,” Linda said. “The band just adds so much and seems to be underappreciated often times.” Eddie agreed: “I love the sound of music, particularly the sound of traditional Ole Miss tunes. Those warm the Rebel heart. So I’m very pleased that Linda and I are able to make this contribution to the band.”

The Haywards’ gift will fully fund a scholarship for members of the Pride of the South Marching Band.

“We hope the scholarship will lift students up and help them on their way to a good life and that it would be a benefit to them through us,” Eddie said, adding that he wanted to give back to Ole Miss for a very personal reason. He points upward and, his voice cracking, says, “He’s been good to me and I’d like to be good to others.”

The Haywards recently celebrated their 50th wedding anniversary by entertaining family and friends in their beautiful home that Eddie designed, complete with hidden features: a built-in, roll-away bookshelf under a stairwell that hides a fully decorated Christmas tree on wheels that can be easily rolled into place during the holiday season; china storage tucked away behind hinged panels in the dining room columns; a bar stocked with the finest of spirits accented by thin glass shelves lined with hundreds of decorative shot glasses–souvenirs from the Haywards’ many adventures abroad; and another hidden panel that reveals a fully functional gift wrapping station.

“We always knew we wanted to come back to Mississippi, back home,” Linda said. “After we both retired, we started looking here in Ridgeland and Eddie started designing our house about six years ago. We have loved being back in Mississippi and particularly in the Jackson area.”

Retirement and good health afford the Haywards the time to return to Oxford for ball games as well as the freedom to indulge their other pastimes. Linda loves to entertain and Eddie frequently works in his gardens – three courtyards he designed: Southern, French and Oriental. They both enjoy traveling by cruise ship, having completed a number of itineraries in the Caribbean, Europe and trans-Atlantic.

Regarding their endowment, Eddie said, “We’re just pleased to do what we can do. Maybe our actions will spur another couple to do the same.”

Gifts of all sizes from alumni and friends combine to strengthen UM’s academic reputation and extend opportunities to students. The Haywards’ planned gift gives them membership in the 1848 Society, named for the year the university opened the Lyceum doors to its first students. The society recognizes generous donors who thoughtfully provide for the university through planned and deferred gifts.