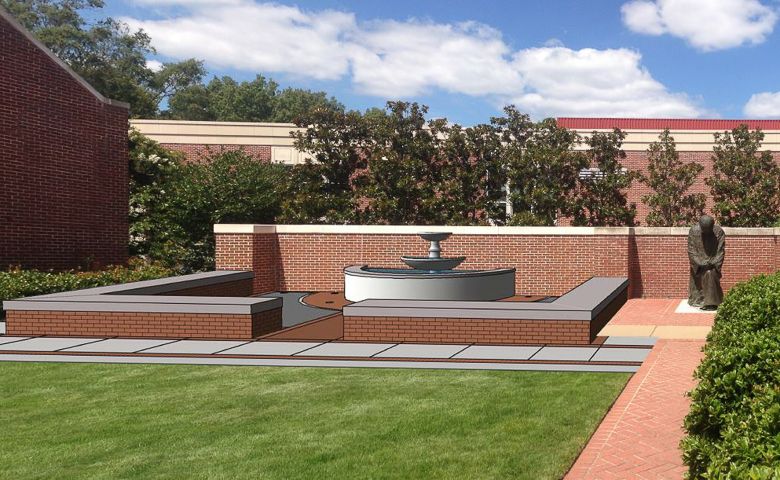 Artist's rendering of the proposed terrace beautification at Paris-Yates Chapel.

When the University of Mississippi seniors of 1928 named May Davis among their top 10 fairest ladies, they likely never imagined that her legacy of beauty would become a fixture to be enjoyed by generations.

In the shade of the bell tower at Paris-Yates Chapel, a bench-lined terrace welcomes anyone seeking a quiet place to think, to pray, to meditate or study. Soon, the area will be enhanced with new brick-work patterns, additional seating, and a tiered fountain that will invite passersby into an ambiance of serenity and grace.

This quiet place, designed for reflection, honors the life of the late Mary Davis Owen of Como, Miss., whose friends called her May and who graduated from the university with a bachelor’s degree in 1928. A $100,000 gift derived from the sale of a 40-acre portion of Mary Owen’s Panola County land will fund the terrace renovation as designated by her son, Penn Owen.

“The gift is really from my mother,” Penn Owen said. “That land had been in her family for 150 years or more. It was significant to me because it came from my mother and she inherited it from her mother. We knew it was valuable and we just held onto it …. It had beautiful cedar trees on it.”

But when Owen received an offer on the land earlier this year, he discussed it with family members and they decided to sell, agreeing that the income would be spent in a way that would honor his mother.

“The first call I made was to Henry Paris,” Owen said. “I’ve always thought Paris-Yates Chapel is really something special and the Paris family members were my mother’s great friends, going way back to Henry’s parents. So I asked Henry if there was something I could do with this money around the chapel.”

Paris contacted Ole Miss Chancellor Emeritus Robert Khayat who proposed a beautification of the existing terrace on the grounds of the nondenominational chapel, which is used for various events, including weddings and memorial services on the Oxford campus.

“The fountain terrace will be a beautiful addition to Paris-Yates Chapel. It’s an enhancement that we’ve wanted to bring to fruition for some time now,” Khayat said. “The Owens’ gift makes it possible and, for that, we are grateful as will be the countless generations of students and others who enjoy this peaceful space.”

Owen believes his mother would appreciate the fountain terrace and especially its installation at an institution of higher learning; she was a proponent of education, having taught school in Lexington, Miss., for a number of years.

Construction to beautify the terrace, which will be used for receptions and other gatherings, is expected to begin in January and be complete by April.