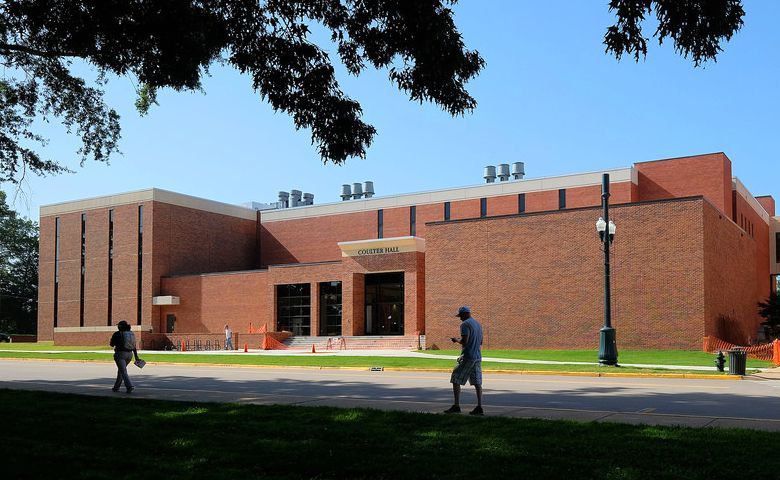 Above: Renovations to UM's Coulter Hall began in 2013 and the four-story addition includes research laboratory space and support offices. The single-story north addition added a 200-seat auditorium, lobby and food service installation. Two existing laboratories are being renovated and will serve as teachings labs. Below: Part of the National Center for Natural Products Research two-building complex, the new Thad Cochran Research Center West Wing addition facing All American Drive and Vaught Hemingway Stadium is one of the most advanced facilities in the region.
In 2012, the University of Mississippi acknowledged a critical shortage of STEM-educated workers and committed itself to producing more graduates from those fields.

"Our nation can continue as a global leader by encouraging more students to pursue the sciences, as well as technology, engineering and mathematics," said outgoing Chancellor Dan Jones. "New, state-of-the-art facilities undergird our efforts to provide outstanding teaching and research in the sciences."

The 2015 fall semester will open with two such facilities. Final touches are being installed in the weeks leading up to the return of students, faculty and researchers. The $16 million renovation of Coulter Hall began in 2013 and will create additional research and gathering space for the university's growing population. Renovations to Coulter Hall and the four-story east addition include research laboratory space and support offices. The single-story north addition added a 200-seat auditorium, lobby and food service installation, including a Starbucks Coffee shop. Two existing laboratories are being renovated and will serve as teachings labs. The project benefits not only the Department of Chemistry and Biochemistry, but also serves as a reflection of the unprecedented growth of the university and the strengthening of the university's research facilities and reputation.

Earlier this spring, the University of Mississippi School of Pharmacy and its Research Institute of Pharmaceutical Sciences dedicated the new Thad Cochran Research Center West Wing, an innovative facility containing capabilities that could drastically improve the health of Mississippians and people around the world. Outgoing UM Chancellor Dan Jones welcomed more than 200 guests who joined the School of Pharmacy to commemorate the occasion.
“The opening of the Thad Cochran Research Center West Wing is a great success for the University of Mississippi,” Jones said. “The facility offers endless opportunities for the advancement of natural products research. Studies conducted in this building will have a local, statewide and global impact on health.”
Funded by several federal grants, the West Wing completes the two-building National Center for Natural Products Research complex. The NCNPR is the nation’s only university-affiliated research center devoted to improving human health and agricultural productivity through the discovery, development and commercialization of pharmaceuticals and agrochemicals derived from natural products.
The new wing, or TCRC West, will allow NCNPR scientists to advance their natural products drug discoveries toward commercialization.
“This year marks the 20th anniversary of the opening of the NCNPR, so it is very fitting that we can mark the dedication of this new wing in 2015,” said Larry Walker, NCNPR director. “It is exciting to see the achievement of this milestone for Ole Miss and the School of Pharmacy. This completes our world-class natural products research center, as envisioned by the school’s leaders over the years.”
Other notable speakers at the dedication were William Canty, field representative for Sen. Thad Cochran; Steven Musser, deputy director of scientific operations for the U.S. Food and Drug Administration; Alice Clark, UM vice chancellor for research and sponsored programs; David D. Allen, dean of the School of Pharmacy; and Walker.
Decades of preparation
First envisioned in the early 1990s, the NCNPR’s two buildings were planned in two phases. Construction of a portion of Phase I, now TCRC East, began in 1992 with funds from the U.S. Department of Agriculture. Personnel occupied TCRC East in 1995, the building was completed in 2000, and the Centennial Auditorium was added in 2008.
TCRC East was designed for research involving natural products discovery. A science library and repository for botanical specimens accompany TCRC East’s sophisticated laboratories.
Grants from the Health Resources and Services Administration and the FDA initiated construction of TCRC West. Barbara Wells, UM School of Pharmacy dean emeritus, and Charles Hufford, associate dean emeritus, secured the funding with assistance from Cochran and his staff.
In addition to HRSA and FDA support, the university offered funding for the expansion. Furthermore, the American Recovery and Reinvestment Act of 2009 provided an opportunity to complete TCRC West in a single construction project. Walker and Hufford secured a grant from the National Institutes of Health via this program. This ARRA grant was the only one awarded to a pharmacy school nationally.
“The initial funding from HRSA and FDA allowed us to plan Phase II in detail,” Hufford said. “This preliminary planning helped immensely and was a big reason why we were funded by the NIH grant – it was a well-thought-out project that was shovel ready.”
Construction began in 2012. Designed and engineered by Jackson-based firm Cooke, Douglass, Farr and Lemons, the addition to the Thad Cochran Research Center nearly doubles the school’s total research space.
Unique training laboratory
To advance the study of natural products as dietary supplements, Waters Corp. and the School of Pharmacy have partnered in the creation of a natural products training laboratory in the new building.
The space will serve to educate government officials, academic or industry professionals, and scientists on best practices in natural products and botanical dietary supplements. One-week courses will be offered to interested individuals and taught by NCNPR personnel.
“This training lab was created while keeping the future of the dietary supplement industry in mind,” said Ikhlas A. Khan, NCNPR associate director. “This will be a great resource for people to get hands-on training and develop the skills to implement good manufacturing practices.”
According to the lab’s mission, it will serve to ensure uniform scientific standards in the advancement of commercially viable natural products by “demonstrating leading-edge techniques using world-class analytical and sample preparation supplies and consumables.”
Waters will loan several pieces of cutting-edge analytical and separation equipment to the university for five years as part of establishing the laboratory.
“Waters is committed to partnering with world-class experts to foster new ideas and promote innovation,” said Richard Ladd, Waters Corp. senior director of pharmaceutical business. “We are very pleased to collaborate with the National Center for Natural Products Research at the University of Mississippi in establishing the state-of-the-art Natural Products Training Laboratory. The training laboratory will increase scientific and regulatory knowledge and promote the use of global best practices in dietary and botanical supplement testing.”
Looking ahead
With the completion of TCRC West, research at the School of Pharmacy will continue to grow for years to come. The building will accommodate more than 100 scientists.
Allen said that the new facility will help the school succeed in its greatest mission, which is to positively affect health and well-being.
“The sky is now truly the limit in terms of what we can accomplish through our work with natural products,” Allen said. “This is a great advancement for our school and research institute.”
Clark echoed Allen’s sentiment and emphasized the incredible impact that the facility will have.
“The center’s stellar record of achievement has laid a solid foundation for many decades to come,” Clark said. “The science done here will continue to inform agencies, policymakers, industry, consumers and the broader scientific community. And as an educational institution, this is the epicenter of the next generation of scientists who will explore the chemistry and biology of botanicals that affect human health.”
Search