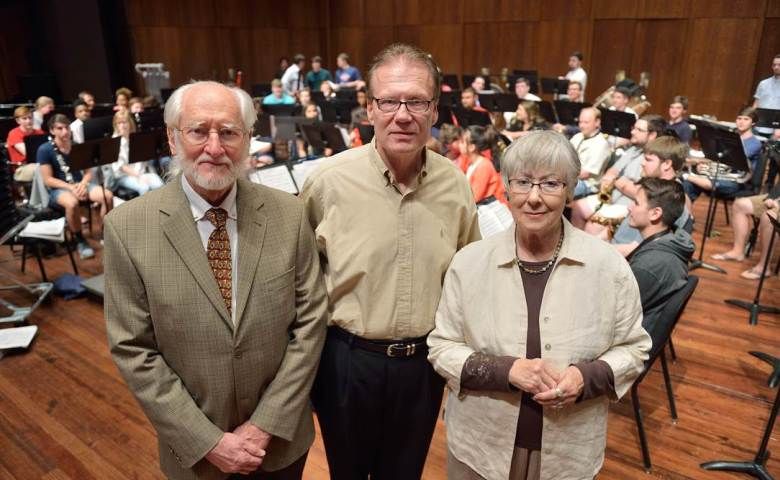 David Willson, center, University of Mississippi director of bands and professor of music, has established a goal of $2 million for a new initiative to raise additional funds for band scholarships. He is joined by Charles and Margaret Hubbert of Memphis, Tenn., who committed a lead gift to the effort.

When Charles Hubbert joined the band as a University of Mississippi student, a door swung open to exceptional cultural opportunities. Some 57 years later, the physician continues to reap rewards of that experience, inspiring him and his wife, Margaret, to make a lead gift to a current initiative building band scholarships.

The Mississippi native, who was born in Lambert and grew up in Grenada, had not traveled outside the state and certainly not outside the country when he enrolled at Ole Miss. Thanks to the Ole Miss Band program, the student traveled to a music festival in Holland and the World’s Fair in Belgium. In fact, Dr. Hubbert recently made his 30th trip back to see the Dutch family that hosted him on that inaugural visit abroad.

“Suddenly as a student band member, I was being exposed to cultural experiences I had never had before,” said Dr. Hubbert, a neurologist and psychiatrist in Memphis, Tenn., who also earned his medical degree on the University of Mississippi Medical Center campus in Jackson.

“These band trips were financed by contributions from supporters of the band and the university. Without this assistance most students of that era in Mississippi would not have been able to travel abroad, thus missing an invaluable part of their education. I thought there was a need to pay back the institution that afforded me opportunities to broaden my life experiences. It feels good to help others,” said Hubbert, who played the French horn as a high school and college student.

David Willson, the university’s director of bands and professor of music, said the Hubberts’ generous support will make an impact on students who give so much of themselves to the band program. Ninety-five percent provide their own instruments, have spent years honing the skills they need to serve the university and work many hours in all kinds of weather to show up and perform on game day. Willson’s goal is to build a $2 million endowment to support band scholarships.

“We are so thankful for Charles and Margaret Hubbert’s gift. Their generous donation will benefit band students for years to come. As tuition goes up, we must find a way to stay competitive to attract band students in a very aggressive market. The Hubberts were so kind and humble when offering this gift and are a great example to us all in giving back. We are very grateful.

“Fans’ recognition of our students is the best feedback we get for the band program, and a good scholarship is key in recruiting and retaining band students for Ole Miss,” the director said.

The University of Mississippi Band has been giving outstanding performances in concert and in support of Ole Miss Athletics events since it organized in 1928. In addition to performing at all home football games and many away games, the Pride of the South Marching Band has performed at numerous bowl games.

Several “pep bands” are formed out of the Pride of the South Marching Band and perform for numerous functions, such as pep rallies before each home football games. Another extension of the band is the Ole Miss Basketball Band, which supports both Rebel and Lady Rebel basketball teams at home games, as well as during annual SEC and NCAA tournaments.

The band program also serves as a teaching lab for those who are preparing to become band directors. In the spring when the marching band is not together, there are three performing concert bands and one lab band for future teachers. The Wind Ensemble tours each spring semester and holds a "Pride of the South" fund-raising concert each year in late April, said Willson.

Ole Miss Band members represent a wide array of academic majors, such as pre-med, criminal justice, engineering, business, political science, journalism and many others. Each band member receives a scholarship.

Dr. Hubbert said that band programs and glee clubs in small-town public schools were, and continue to be, essentially the only “free” music instruction available to many students, and those programs enable students to go on to participate in collegiate groups.

“More philosophically, participating in music is character-building – it helps people develop discipline and in so doing we become better citizens. Music is ethical; it’s one of those basic experiences that is an inherent part of our being. I think people have a better outlook on life with music in their lives. Music provides a center: It’s very therapeutic and peaceful. It’s a part of life that is not as complicated as everything else,” said the physician.

Margaret Hubbert’s mother, a pianist and organist, studied classical music at The Julliard School in New York, inspiring her daughter to become a supporter of the arts. The Hubberts enjoy all types of music; attend musical and theatrical performances and art exhibits; and support the Shakespeare Festival in Memphis.

“We’re very much lifelong students,” Margaret Hubbert said, adding that they have also participated in and organized medical mission trips to Africa, South America and the Philippines.

Dr. Hubbert even returned to college, this time to the University of Memphis, to earn a second undergraduate degree in music.

“As a perennial student, I continue to appreciate and study music. Hopefully, news of our support for the band’s scholarship initiative will lead others to consider the benefits of giving so that students, in this case band students, might have the opportunity to broaden their experiences whatever their goals might be. Margaret and I hope other alumni and friends will recall those experiences that helped prepare them for life and see if there are ways that they can help others enjoy similar experiences.”

Gifts of all sizes combine to provide band scholarships. Individuals and organizations can make gifts to the University Marching Band Scholarship Fund by sending a check with the fund noted in the memo line to the University of Mississippi Foundation, 406 University Ave., Oxford, Miss. 38655; or by going online at www.umfoundation.com/makeagift. For more information, contact Ron Wilson, development director, at jrwilso3@olemiss.edu or 662-915-1755.