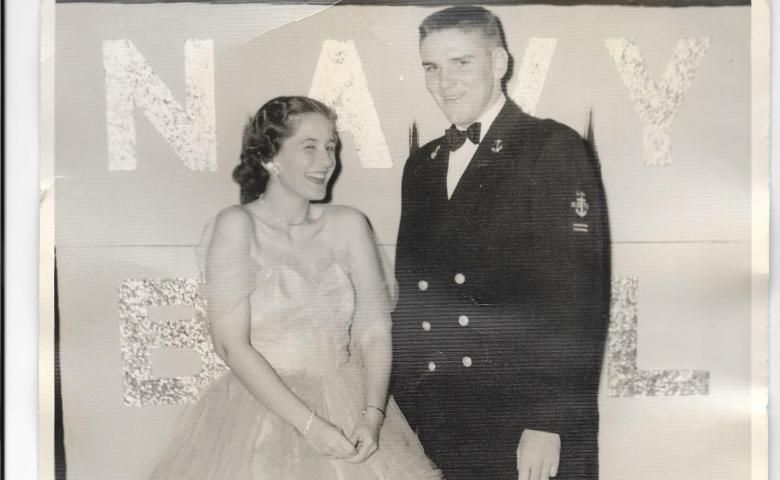 Above: University of Mississippi alumni Robert C. and Josephine Garner Scott, shown here in a photo from a U.S. Navy ROTC ball at Ole Miss, have been memorialized by their daughter, Marion Readett, through a planned gift to UM. Below: Readett also chose to recognize her great-aunt Lenore Carrier, a legacy benefactor to Ole Miss, through her gift.

When Marion Scott Readett of Fort Mill, S.C., fulfilled her parents' wish of creating a scholarship endowment at the University of Mississippi, she also embarked on a journey of reconnecting with her past.

For Marion, Ole Miss represents special childhood memories of family, love and magical fairy tales. The great niece of the late Lenore Carrier, or "Noie" as she was known to her niece, Marion's bond to the campus can be heard through her fond recollections of times spent at Carrier House, now the home for UM's chancellor since the Carrier family donated it in 1971. Lenore Carrier and her husband, Robert, were major supporters of the university, donating funds to build Carrier Hall, home to the Department of Engineering, and establishing the Robert M. Carrier Scholarship, one of UM's most prestigious scholarships.

Marion and her sister, Robin Scott Greene of Shelby Township, Michigan, were treated as princesses upon each visit to Aunt Noie's.

"Visiting Noie was like traveling to magical place," says Marion. "As a young child, I didn't understand some of the modern conveniences of the home. For instance, if anyone needed something from the kitchen during a meal, one of the house maids would magically appear. We fully believed she had special powers; little did we know my aunt had a buzzer installed under the dining room table."

The only two children on her mother's side of the family, the Scott daughters were spoiled each time they made the trip from Chicago to Oxford. The two often dressed up in Aunt Noie's clothing and jewelry to be chauffeured around the driveway in the limousine by the Carriers' driver, Lester. "We would put our hands out the window and wave like we were Miss Americas," she says.

There were also encounters with Ole Miss royalty. One of Marion's fondest memories was a visit 54 years ago when she was swept up in the arms of Johnny Vaught.

"We were all standing in the entryway and he just suddenly started dancing with me," she says. "I was very young, maybe six years old, but I will never forget that."

A Tribute to Her Family

The Scott Family Scholarship Endowment also recognizes Marion's late parents, Robert C. and Josephine Garner Scott, both UM alumni. The couple was married for 60 years after meeting as students at Ole Miss in the 1950s.

Robert Scott, originally of Bayonne, New Jersey, was a Navy ROTC cadet before graduating from UM in 1954. He became a U.S. Marine Corps captain and then attended the University of Michigan to earn his Juris Doctor degree. He practiced law in Chicago and then began a new career in banking, moving the family to Detroit while Marion was in high school.

Josephine Scott, a Cleveland, Mississippi, native, was a Mortar Board member, a proud Tri Delta and on the staff of The Mississippian, the student newspaper, before graduating from UM in 1953. She received a master's degree from Oakland University in southeast Michigan before teaching in Detroit. In both Chicago and Detroit and later Fort Myers, Florida, Josephine Scott served as president of local Ole Miss Alumni Association chapters. She also remained active with the Delta Delta Delta Sorority, of which Lenore Carrier and her two sisters had also been members.

"My mother was always the perfect Southern woman," says Marion. "She was a product of Mississippi in all the positive ways; she was always very kind, polite and humorous."

Robert and Josephine Scott continued to visit campus for Ole Miss reunions and other events after the Carriers had passed away. "My parents had a very personal relationship with Ole Miss, which means we all did growing up. After my parents passed away it really rekindled the Ole Miss memories; it has reminded me of where I came from and the memories that shaped me."

Through a testamentary gift of $150,000, Marion has created a scholarship endowment that will provide further connection to the university her family loved.

Marion received a bachelor's degree in law enforcement from Ferris State University in Big Rapids, Michigan. After graduation she moved to Ohio and worked in higher education and healthcare nonprofit administration. She moved to Charlotte in 1988 in hopes for warmer weather and worked for Mecklenburg County until she retired.

"Before I moved, I was asked during my exit interview why I was moving. I told them it was because it was going to snow again."

She married David Readett in 2005 and now works as a domestic violence forensic investigator and volunteers with a pet therapy program for the elderly.

Investing in the Future of UM

"When donors include the University of Mississippi in their long-term estate and financial plans, they support our students and programs far into the future," says Sandra Guest, vice president of the UM Foundation. "We are truly grateful to Mrs. Readett for honoring her family's legacy on our campus in perpetuity with this permanent endowment."

Marion displays her plaque from the UM Foundation recognizing her membership in the 1848 Society, the honorary club for all those who make a planned gift to the university, in her home. She said each time she passes it a warm feeling gives her pause as she remembers those who were so important to her.

"It means a lot to me to be able to do this, but I also know it would mean a lot to Noie and to my parents," Marion says.

"There was so much love in my aunt's house, and that was such a wonderful thing," she adds. "Few people have memories like what I have-thanks to Noie-and that's all part of my connection to Ole Miss. It became part of who I am because it was a part of my family. The first two songs I remember learning was the "Marine Corps Hymn" and "Hotty Toddy." To me, Ole Miss is love."

Marion's planned gift gives her membership in the 1848 Society, which was established in 1998, the university's 150th year. The society recognizes alumni and friends who have either funded or planned a deferred gift, such as a bequest or life income plan. For more information on gift planning, contact Sandra Guest, vice president of the foundation, at sguest@olemiss.edu or 662-915-5208.