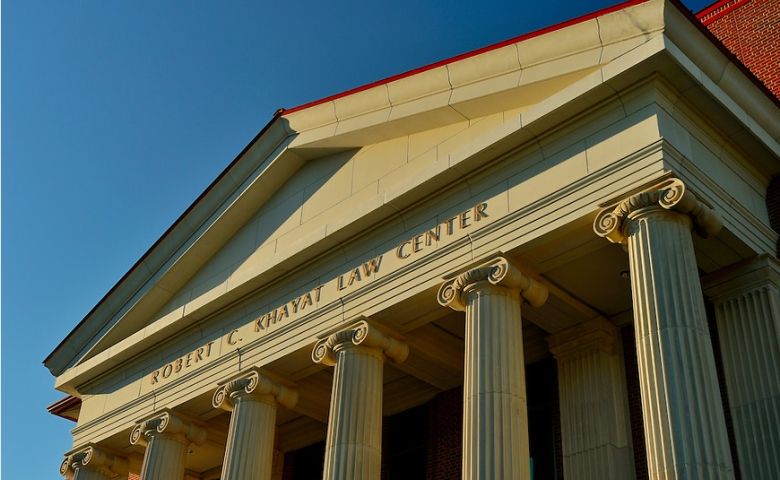 The UM School of Law is able to support and enhance its faculty thanks to an endowment created by the late Jessie D. Puckett, Jr. of Brandon, Miss.

Mississippi native Jessie Puckett was defined by his deep-seated beliefs about commitment, respect and good manners, says a family member. Among the objects of his devotion were his church, his family, people in general and his work.

He also loved the University of Mississippi School of Law.

A 1953 law graduate, Puckett began building a legacy of private support to the School of Law in the early 1980s. In 1987, he created the Jessie D. Puckett, Jr. Law Endowment with a $2,000 gift designed to provide resources for faculty support.

Puckett, 88, died in late 2014 in Brandon, Miss. Through his estate, more than $507,000 has recently been directed to the Puckett Endowment, bringing his lifetime giving to the university to more than $620,000. Endowed funds are held in perpetuity by the University of Mississippi Foundation, with the annual investment income directed to the donor’s designation.

“Uncle June was a wonderful, humble man,” said Charlene Dear of Brandon, his niece. “What he did, he did because he wanted to do so. He sought no ‘pats on the back’ or recognition. He loved his law school and was happy he could do something for it.”

“Mr. Puckett never expected anything in return for his generosity. He simply wanted to give back to the law school that helped him in his career. Mr. Puckett understood that small, regular gifts can grow into substantial endowments for the support of our university. His gifts undergird the great work of our law school faculty members, including their outstanding scholarship and teaching,” the dean said.

“The Jessie D. Puckett, Jr., Endowment has provided truly invaluable support for many of our law faculty over the years,” said Nowlin, the most senior Puckett Lecturer and associate dean for faculty development. “I can’t overstate its impact. Jessie D. Puckett’s generosity and commitment to the Law School has made a huge difference in the lives of faculty – and that in turn has profoundly changed the lives of students.

“The faculty’s mission is to prepare our students for the rigors of law practice in an increasingly competitive world. By supporting the faculty in that mission, Mr. Puckett has had a major impact on the lives of literally thousands of law students. The enrichment we see from faculty support – for research, publishing, conference participation, visiting speakers, moot court coaching and endless other activities – creates a fantastic educational atmosphere for students,” Nowlin said.

Throughout his 25-year career with ExxonMobil and then a 14-year career with Forest Oil Co., Puckett traveled a great deal and lived in Mississippi, Louisiana, Texas and Florida. When he retired, he purchased his parents’ “old home place” and dedicated much of his time to the community and to Puckett Baptist Church, where his grandparents were founding members. He derived much enjoyment from a political campaign, although unsuccessful, for a small public office in Puckett because stumping for votes brought him face to face with so many people, says his niece.

“My uncle was a very personable man and enjoyed meeting people,” said Dear, who also characterized him by his great generosity, particularly to Puckett Baptist Church. “While the new sanctuary was being built at the church, he wanted to be supportive, but he had no carpentry skills. Every day that someone was working on that church, Uncle June provided all the meals, snacks and drinks. He found a way to contribute.”

Another illustration of his generosity could be seen through his commitment to his mother, whose health condition required constant care from her daughters for two decades, Dear says. Puckett and his brothers took care of their mother’s and sisters’ financial needs during this time.

The youngest of their seven children, Puckett was born to Jessie Daniel Puckett and Linnie Mae Purvis Puckett. He graduated from Central High School in Jackson, Miss., in 1943, and later that year he was called to active duty in the U.S. Navy. After three years of service, Puckett was honorably discharged as a Quartermaster Second Class. He earned an undergraduate degree in economics from Millsaps College in 1949. He worked for two years at the Mississippi Game and Fish Commission, which he left when he was accepted into the UM School of Law.

An individual who was private about his own personal experiences, Puckett didn’t share a great deal about his time in law school, his niece says, except to let his family know he was extremely proud of the school and of the opportunity he had to earn a law degree.

In the last five years of his life, Puckett was a resident of the Emeritus of Heritage House in Brandon.

“During the time he was in the assisted living home, Uncle June continued to be someone everyone enjoyed and loved,” Dear said. “He always had kind words and compliments for his caregivers and used his manners, saying, ‘yes, ma’am’ and ‘thank you.’ He was cordial and tried to make everyone happy. He was the last of the old Southern gentlemen.”

His survivors include other nieces and nephews.

Individuals and organizations can make gifts to the Jessie D. Puckett, Jr. Law Endowment by sending a check with the fund noted in the memo line to the University of Mississippi Foundation, 406 University Ave., Oxford, Miss. 38655; visiting www.umfoundation.com/makeagift; or contacting John Festervand, development officer for the UM School of Law at 662-915-1757 or jfestv@olemiss.edu.