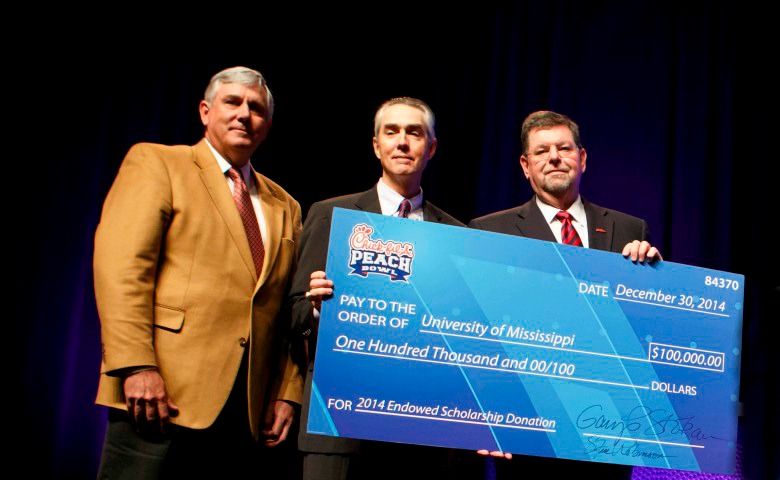 In 2014, the Chick-fil-A Peach Bowl again lived up to its reputation as college football’s most charitable bowl game by completing its eighth straight year of charitable and scholarship contributions exceeding the $1 million mark, including a gift of $100,000 to the University of Mississippi for scholarships.

“We are driven to do what we can to help and elevate those who have supported us,” said Chick-fil-A Peach Bowl President and CEO Gary Stokan.

First priority for the Chick-fil-A Peach Bowl Scholarship is given to graduates of the Play It Smart program.

Play It Smart began in 2007 when the Chick-fil-A Peach Bowl partnered with the National Football Foundation and College Hall of Fame to create an educational program targeted at high school football players from economically disadvantaged environments. Play It Smart provides “academic coaches” in all 11 of Atlanta’s public high schools. The coaches strive to keep the students in school, help improve their grades and study habits, encourage them to take college entrance exams and help them transition to college.

Students from Atlanta-metro area high schools are eligible for the scholarship if no Play It Smart graduates are identified in a given semester or year. In the event no eligible students are found from the Atlanta area, all UM applicants with Georgia residency become eligible.

“Giving back in the communities who have supported us is part of who we are,” said Stokan. “It is a priority for us and a significant part of our mission as an organization. The Atlanta community, our expanding partner conferences and schools, student-athletes in Georgia – they are all part of the Chick-fil-A Peach Bowl family.”