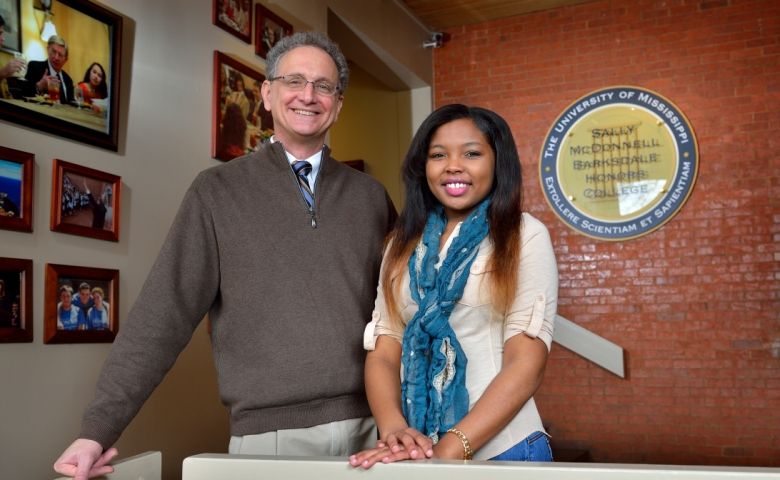 Kajah Coleman, a freshman from Calhoun City, Miss., was named the recipient of the Joey Embry Memorial Scholarship at the University of Mississippi.

Joey Embry, a graduate of Bruce High School, was active during his time at Ole Miss as a member of the Fellowship of Christian Athletes and as offensive lineman for the Ole Miss Rebel football team. Embry tragically lost his life in a 1998 drowning, but his legacy lives on.

His family and friends make scholarships for students like Kajah Coleman possible. “After his death, people were asking us what they could do and where they could contribute in his memory,” said his parents Bill and Gwen Embry. “Ole Miss was contacted and the staff told us how to set up a fund.”

The scholarship is intended for UM students from Calhoun and Yalobusha counties. “The scholarship doesn't necessarily have to go to a straight-A student, but the recipient does have to be someone who needs and desires an education,” said the Embrys.

Coleman is certainly such a student. The Sally McDonnell Barksdale Honors College (SMBHC) scholar is active on campus and takes advantage of the honors college environment.

“It’s different,” she said. “I like the smaller classes and the discussion-based learning style. I really get a lot out of it.”

The honors college was one of many factors that pulled Coleman to UM. She had been a long time Rebels fan thanks to older brother Kegan Coleman, a 2013 graduate from the UM Lott Leadership Institute, who is now in his second year at the UM School of Law. While attending summer programs and earning credit toward college, Kajah Coleman was sold on the Ole Miss experience.

“We are proud to have Kajah as a member of our SMB Honors College community,” said Douglass Sullivan-González, dean of SMBHC. “Kajah brings a love of life to our academic community, and her gritty academic commitment to public health will carry her far. She will stay the course and make a difference in our great state.”

Coleman is working hard toward a future career in medicine.

“I hope to go into radiology, as both my grandmother and my mother had cancer,” said Coleman. “Seeing how the radiology technicians played a role in their treatment interested me in the profession.”

The daughter of Marshall and Bernadette Coleman, Kajah Coleman was active in academic clubs, band and cheerleading before graduating as salutatorian from Calhoun City High School in 2014.  Coleman was on the color guard, played clarinet and led her band as drum major her senior year. She also served as both class president and student council president.

“To receive this scholarship is really inspiring,” said Coleman. “Even though some might think it’s just a drop in the bucket for a college education, I would say it makes a huge difference and means so much. I really thank the generous family and friends of Joey Embry who made this possible.”

Individuals and organizations can contribute to the Joey Embry Memorial Scholarship Fund by sending a check with the fund noted in the memo line to the University of Mississippi Foundation, 406 University Avenue, Oxford, Miss. 38655; or online www.umfoundation.com/makeagift. For more information, please call the UM Foundation at (800) 340-9542 or (662) 915-5944.