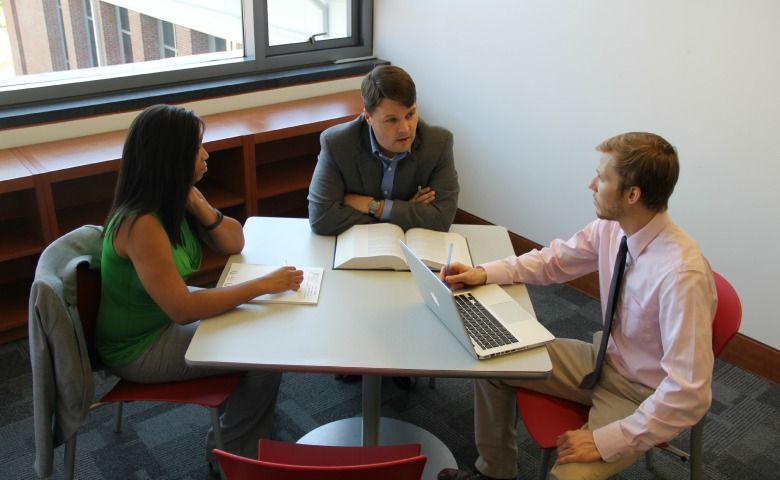 The MacArthur Justice Clinic provides law students with opportunities for hands-on experience under the direction of the Center’s director and other experienced attorneys. In its first semester, the UM Center has already joined other civil rights groups in filing suit to free Mississippians held in jail for long periods without charges. Clinic students are assisting the new MacArthur Center director, veteran Mississippi attorney Cliff Johnson, to secure the rights of inmates who are detained indefinitely without appointment of an attorney and without being charged with a crime.

Johnson joined the faculty of the law school as an assistant professor of law and supervises law students participating in the MacArthur Justice Clinic.

Former Assistant U.S. Attorney Johnson prosecuted civil and criminal fraud cases in the U.S. Attorney’s Office for the Southern District of Mississippi from 1996 to 2001. Most recently, Johnson was a partner for 13 years at the Jackson law firm of Pigott & Johnson, where he handled a wide variety of complex civil and criminal matters.

“I am pleased to see our School of Law engage in the issues of social justice,” Chancellor Dan Jones said. “It is yet another way the university is reaching beyond our campus to transform the world around us.”

“The MacArthur Justice Clinic at Ole Miss Law will have a positive impact on the lives of the people of Mississippi, while providing a wonderful learning experience for our students,” said Richard Gershon, law school dean. “It is an honor for us to partner with the J. Roderick MacArthur Foundation in this important endeavor.”

Since its founding in Chicago in 1985 by the family of J. Roderick MacArthur, the MacArthur Justice Center has played a prominent role in bringing Chicago police misconduct and torture to the public’s attention and has helped several wrongfully convicted men and women win multimillion dollar verdicts and settlements as compensation for the time they were imprisoned wrongfully. Among its many cases, the center has won major reforms to protect juvenile parolees previously subjected to arbitrary detention and imprisonment, has challenged the detention of terrorism suspects without trial or access to the courts, and helped lead the fight that ended capital punishment in Illinois.

The MacArthur Justice Center opened its New Orleans office last year. It is the lead counsel in Jones v. Gusman, the federal lawsuit alleging pervasive violations of prisoners’ constitutional rights in the Orleans Parish Prison. The center’s New Orleans staff is working to ensure the OPP abides by a consent decree to ensure prisoner safety and adequate staffing at the jail. In addition, the New Orleans office also has worked on capital punishment cases, including advocating for public disclosure of information about drugs Mississippi plans to use to carry out executions by lethal injection.

“There is a historic connection between Mississippi and Chicago, which traces back to the great migration. We are committed to fighting injustice in both locations,” said John R. MacArthur, lead board member of the MacArthur Justice Center. “We look forward to building on the success of our Chicago office at Northwestern law school as we establish a similar partnership with the University of Mississippi.”

“Cliff Johnson is the perfect choice to lead the MacArthur Justice Center at Ole Miss,” said Deborah H. Bell, associate dean for clinical programs and professor of law. “He has a long history of outstanding practice in Mississippi and has the state’s best interests at heart. We hope he will inspire generations of Ole Miss law students to make the state a better place.”

“I am thrilled to join the MacArthur Justice Center and this prestigious law school, and I look forward to beginning a collaborative relationship with the very talented lawyers at the center’s offices in Chicago and New Orleans,” Johnson said. “This will be a formidable alliance of experienced, savvy and successful litigators working with smart and committed law students who have been trained by the best and are enthusiastic about putting what they’ve learned into practice.

“During the past two decades, I have enjoyed a challenging and rewarding litigation practice. I have represented dozens of people in federal courts around the country who have blown the whistle on fraudulent schemes undertaken to wrongfully obtain taxpayer dollars, represented inmates facing death sentences and enduring deplorable prison conditions, and helped wage court battles against discrimination. I also gained valuable experience and insights handling criminal jury trials on behalf of the Department of Justice and, later, representing criminal defendants in federal courts.

“I’m looking forward to engaging in the same kind of fervent advocacy at this new Center and helping train the next generation of attorneys committed to the fight for human rights and social justice,” Johnson added.

Johnson received a bachelor’s degree in political science from Mississippi College in 1989 and a law degree from Columbia Law School in 1992. During 2005-2006, he was a Fulbright Scholar working as a professor at the Raoul Wallenberg Institute for Human Rights and Humanitarian Law and the Lund University School of Law in Lund, Sweden. Since 2006, Johnson has lectured in Sweden on numerous occasions, including speeches at the Nobel Museum and Wallenberg Institute graduation ceremonies.

To make a gift to support the School of Law, contact John Festervand, director of development, at jfesterv@olemiss.edu or 662-915-1757 or visit online law.olemiss.edu/alumni-friends/giving/.