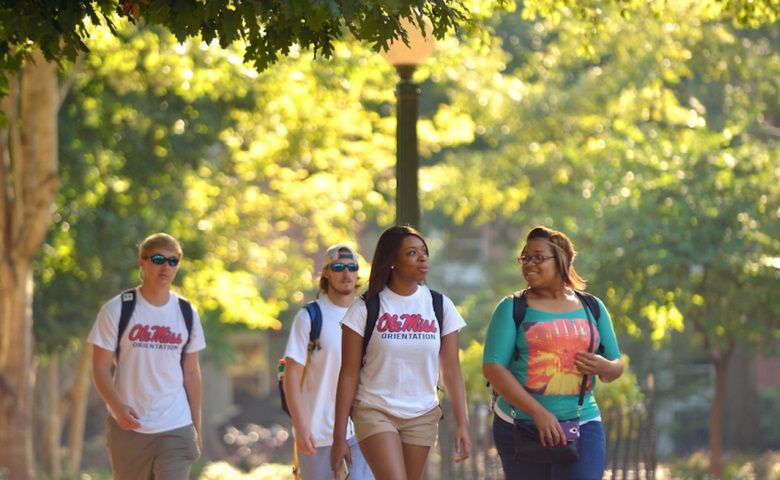 The William and Lucile Hicks Scholarship Endowment aims to ease both academic and social transitions from high school to college for Delta students coming to Ole Miss through the Foundations for Academic Success Track (FASTrack) program.

Home is a place that always beckons, calling to us no matter where we are. Likewise, as our alma mater states, Ole Miss is “a place that ever calls.”

Recently, William “Bill” and Lucile Hicks of Wayland, Mass., have answered that call by generously creating the William and Lucile Hicks Scholarship Endowment for University of Mississippi FASTrack students through a $250,000 gift.

Both originally from Greenwood, Miss., a recent visit home for the couple helped solidify their decision to create a scholarship fund supporting Foundations for Academic Success Track (FASTrack) students from Leflore County. An academic program for freshmen, FASTrack helps students acclimate to campus life and adjust to the rigor of university academics.

“We appreciate that the university is embracing programs like FASTrack to prepare students who, for various reasons, might falter during their transition from high school to independent academic careers,” said Bill Hicks, who received a bachelor’s degree in accountancy from UM in 1959.

“That we can play a role in enabling FASTrack to benefit more students, particularly children of the Delta, is an honor.”

“Bill and Lucile Hicks understand that the University of Mississippi is special because of our people – both the students who come here and our faculty and staff who dedicate their lives to teaching and mentoring our future citizens and leaders,” said Chancellor Dan Jones. “The scholarships created by their endowment, like the FASTrack program itself, will help add an extra layer of support for deserving students.”

A Helping Hand to Higher Ed

FASTrack addresses the needs of the whole person, with attentive advisors and peer mentors helping students resolve a multitude of challenges, and not just the academic variety.

“Our FASTrack program is helping students to succeed,” said Stephen Monroe, FASTrack director and assistant dean of liberal arts. “Now, because of Bill and Lucile Hicks, it will have an even greater impact, especially for students from the Mississippi Delta. Bill and Lucile care deeply about UM, about the Delta and about our state. We are grateful.”

One such student from Greenwood, Bre O’Neal, a liberal arts nursing major, appreciates how FASTrack eased her transition to university living and academics.

“Being in FASTrack has been a big help, especially having peer mentors to talk to and opportunities that have been offered to us for tutoring,” said O’Neal. “Getting to come for the summer was good too because it gave me a chance to learn the campus and get comfortable here.”

The couple had been thoughtfully considering how they might make a gift to Ole Miss for some time. “I believe it is important to give back to places that are important to your life track and your family,” said Bill Hicks. “I also believe that education is key to a successful and vibrant society, so I was very interested to give to an initiative like this.”

Lucile Pillow Hicks shares her husband’s belief in giving back, especially with regard to education. Her family has done much for education locally in Greenwood. “My Grandmother Pillow donated the land for Pillow Academy, and my brother and his sons have been active there. Certainly education is a multi-generational interest of both of our families.”

The two began dating in college, getting acquainted through a mutual interest in tennis. Bill Hicks, one year older than Lucile, started at UM while she enrolled at Millsaps University one year later. The two were married in the fall of 1960 after her graduation.

Bill Hicks served as UM student president of the School of Commerce his senior year. After graduation he joined the U.S. Army having completed the UM ROTC program.

Hicks served as a first lieutenant for two years in San Francisco before completing a MBA in Finance at the Wharton School of the University of Pennsylvania. He began working at Wellington Management, a private investment firm, during the summer then chose to continue working there when offered a position after completing graduate school.

“When I started at Wellington Management, there were 90 employees. Now there are 2,200, so it has grown quite a bit,” said Hicks. “I began as an analyst, like most, then later became director of the research department, and served as a portfolio manager. I had a 37-year career with Wellington, starting in Philadelphia and moving to Boston in 1968.”

In their 46 years as New Englanders, Bill and Lucile Hicks have stayed active in causes dear to their values – preservation and education. Bill has served on the boards of the Massachusetts College of Art and Design Foundation and Historic New England, an organization that supports historic house museums and restorations across New England.

A former high school math and science teacher, Lucile serves on the board of a charter school, and has served stints on the boards of a regional land trust, the New Bedford Whaling Museum, and as the governor's appointee to the Massachusetts Water Resources Authority.  In 1986 she received an MPA from the Kennedy School at Harvard.  Most notably, for 16 years Lucile served in the Massachusetts House and Senate.

“I represented these issues – water resources, land conservation, education – as well as other local concerns,” said Lucile Hicks. “Also, it was an honor to represent a district with so much history. The Battle Road from Lexington-Concord was in my district; that was sacred ground as far as I was concerned. So much of what this country stands for was founded right here.

“Bill and I really feel fortunate that our families had such a keen appreciation for the value of an education and had the means to make it possible for us to go to college,” she added. “It seems a shame that any motivated student from Leflore County would have limited educational opportunities due to financial concerns. We hope that this endowment is able to give such students real hope for their futures.”

The couple has two grown children, Brian in Massachusetts and William in Seattle, and five grandchildren.

Individuals and organizations interested in providing support can send checks payable to the University of Mississippi Foundation with the William and Lucile Hicks Scholarship Endowment for FASTrack noted in the memo line to 406 University Ave., Oxford, Miss. 38655, or visit umfoundation.com/makeagift. For more information, contact Denson Hollis, senior director of development for the College of Liberal Arts, at dhollis@olemiss.edu or (662) 915-5092.