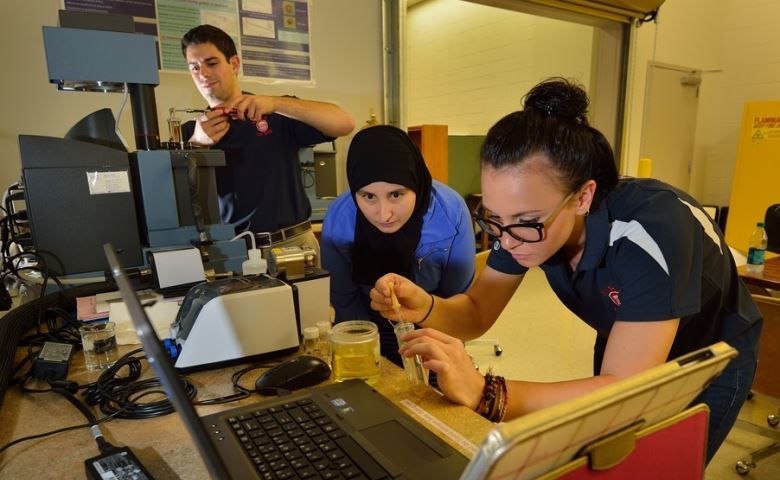 A generous gift from the Gertrude C. Ford Foundation will help ensure that the University of Mississippi continues to provide cutting-edge educational opportunities in the sciences for years to come.

The University of Mississippi's reputation for strong teaching and research in the sciences will be bolstered by the addition of a new science building, thanks to a $20 million lead gift from the Gertrude C. Ford Foundation of Jackson.

The facility will be a significant addition to “Science Row” along the section between University Avenue and All American Drive. It comes on the heels of the construction of the Thad Cochran Research Center Phase II – an addition of more than 96,000 square feet that is described as the most technically sophisticated research building in the Southeast – and an expansion of Coulter Hall, adding almost 36,000 square feet.

The classroom space and technological advances offered by another science building will be critical to serve the continuing enrollment growth, UM leaders say. The fall semester opened with 23,096 students on all campuses, the largest enrollment in the state, leading The Chronicle of Higher Education to name UM among the nation's fastest-growing colleges in its Almanac of Higher Education 2014.

Founded by the late Gertrude Castellow Ford, who came from a family of dedicated philanthropists, the Ford Foundation has already contributed $25 million for the 88,000-square-foot Gertrude C. Ford Center for the Performing Arts, opened in 2002 on the Oxford campus, and for several other university initiatives. Foundation board members are Anthony T. Papa, Cheryle M. Sims and John C. Lewis, all of Jackson.

“The Ford Foundation board members have been very pleased with the utilization of the private support we have provided the University of Mississippi,” said Tom Papa, president of the foundation board. “I learned of the need for another science building on the Oxford campus and pursued a discussion with Chancellor Dan Jones. He said a gift from the Ford Foundation's gift would inspire others to support the science building, and I do believe that will occur. The chancellor has been very effective in leading Ole Miss, as evidenced by the more than $350 million in private gifts during the last three years.

“Today the Ford Foundation announces this $20 million contribution with great confidence in the University of Mississippi’s future path. This new science building represents another exciting opportunity to serve generations of Ole Miss students.”

The projected cost for the building is around $100 million, and the size is expected to be around 200,000 square feet. UM will seek other private funding, as well as state and federal funding, and will use internally generated cash and borrow funds to cover the remaining costs. University leaders hope to see the building completed by fall 2018.

“Historically, the Ford Foundation has focused its large commitments on enriching the lives of all Mississippians through investments in the arts, medicine and the human condition in the state of Mississippi, said John Lewis of the Ford Foundation. “This pledge represents our first major commitment to science and education. Building on our partnership with the University of Mississippi, we hope to be able to provide the students and faculty of the university a state-of-the-art facility that will further the education in the sciences for generations to come.”

Ford Foundation board member Cheryle Sims said, “We are all very happy to be teaming up with Dr. Jones in his efforts to construct this new science building at the University of Mississippi.”

“Our nation can continue as a global leader by encouraging more students to pursue the sciences, as well as technology, engineering and mathematics,” he said. “This state-of-the-art facility will undergird our efforts to provide outstanding facilities for teaching and research in the sciences. Ford Foundation board members possess a deep understanding of needs in higher education and believe in investing in extraordinary educational opportunities. We are profoundly grateful for their generosity.

“By partnering with us in these ambitious pursuits, the Ford Foundation is helping transform the lives of countless students and investing in our nation’s future.”

This new science facility will join others on Science Row, including Coulter Hall (chemistry), Thad Cochran Research Center (National Center for Natural Products Research, Research Institute of Pharmaceutical Sciences and School of Pharmacy), Faser Hall (pharmacy) and Shoemaker Hall (biology). Completion is nearing on the Thad Cochran Research Center Phase II, which is almost doubling the School of Pharmacy's research space. Among the cutting-edge facility's features are an area for clinical trials, an expanded botanical-specimen repository, laboratories for scaling-up synthesis of naturally derived compounds and laboratories for expanding efforts to discover natural products.

Papa described the outcome of the Ford Foundation's support of UM as a “very positive experience” that has benefited the university and its students, Mississippi and the region.

“Certainly these experiences led to our decision to award another major gift,” he said. “The board members have been very proud of the way the Gertrude C. Ford Center for the Performing Arts is run and all the events it has drawn to campus. The first presidential debate of the last election was hosted at the center, and look at the positive attention the university and state received from that. It was a needed addition to the campus, and we have been pleased with its impact.”

The Ford Foundation also provided gifts for the Gertrude C. Ford Ballroom in The Inn at Ole Miss and the Suzan Thames Chair of Pediatrics at the UM Medical Center. A partnership with the city of Oxford resulted in the Gertrude C. Ford Boulevard, providing a new north-south thoroughfare for the ever-growing Oxford-University community.

“I believe if Mrs. Ford was alive and could experience all the things on the UM campuses that have been the result of her resources that she would be very pleased,” Tom Papa said.

Gertrude C. Ford was raised in a generations-old tradition of philanthropy, which began more than 150 years ago with a $25 donation from her family to the Andrew Female College Building Fund in Randolph County, Georgia. Mrs. Ford established the Gertrude C. Ford Foundation in Jackson with a very generous gift in 1991. Mrs. Ford died in September 1996. She and her husband, Aaron Lane Ford, who was an Ackerman attorney and U.S. congressman representing what was then Mississippi's Fourth District, are buried in Cuthbert, a small town in southwest Georgia.

The Ford Center houses an average of 150 events annually. It is the centerpiece of UM's cultural and scholarly mission to present the finest in the performing arts and visiting lecturers.