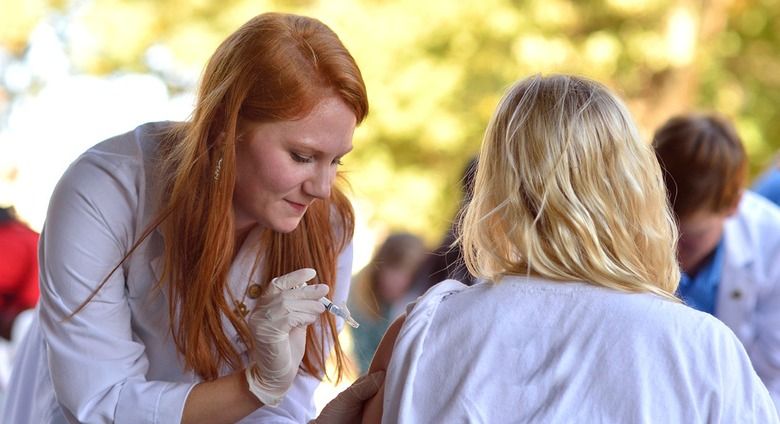 Bob Turgeon, a 1964 UM graduate, has created a scholarship endowment through a charitable remainder unitrust named for his mother, Rose Audet Turgeon (pictured below), to benefit BSN Pre-Nursing students. Turgeon's mother worked in a hospital but never had the opportunity to earn a full nursing title or degree.

Rose Turgeon never had the opportunity to become a nurse. But her son is now giving that chance to others.

Stephen Monroe, assistant dean of the UM College of Liberal Arts, said the endowment will benefit not only deserving students but also the communities they’ll someday serve.

“Bob Turgeon is enabling students to receive the education they need to launch their nursing practices,” Monroe said. “His gift will have an impact throughout the state of Mississippi, enriching the health of its citizens.”

For Turgeon, naming the fund for his mother honors her memory, both on his own behalf and on that of his late father, Joe, and sister, Viola.

“This is about paying back my mother for taking care of the family,” he said. “It wouldn’t have been a family without her. She was the glue.”

The daughter of French-Canadian immigrants, Rose Turgeon was born in Uxbridge, Mass., and raised among seven siblings. She married and became a mother, then returned to work when her son started school.

“My mother lived a simple life,” Bob Turgeon said. “My father was a factory worker. We didn’t have a lot of money back then. But I would catch her making out little checks to charities from time to time.”

Rose Turgeon worked in textile mills until the industry folded in the late 1950s, then took a job at a state hospital in Westborough, Mass. While her work in patient care included many nursing duties, she was not able to take part in a program that would have earned her the official title. After retiring she belonged to a travel club and dearly loved seeing new places.

In 1962, he was working in Massachusetts when he met a pair of young female teachers from Memphis who had recently graduated from Ole Miss through a mutual friend who had briefly attended UM in 1959. He’d been thinking of going back to school; their charms sealed the deal.

If Bob Turgeon felt out of place when he arrived in Oxford — a Massachusetts boy landing in the heart of the South — nothing could have prepared him for what he’d witness that fall.

“It was quite a shock,” said Turgeon, who had to exit Dupree Hall as the riots over James Meredith’s admission turned the Ole Miss campus upside down.

“Being from up here, I hadn’t been following what was happening too much,” he said. “It only hit me when I heard Lt. Gov. Johnson talk at a rally in front of the Lyceum. All of a sudden, I realized: ‘Bob, you’re in the wrong place.’”

Yet even through the subsequent military occupation of the town and campus, Turgeon never considered packing up and going home.

Asked by another student if he would transfer, Turgeon replied, “I’m here.”

Turgeon completed a degree in advertising in 1964 and worked briefly in that field. Over the course of his varied career, he spent two years on and off in Europe selling automobiles to military personnel and worked in Washington in the insurance business. He settled back home in Massachusetts in 1969, working in the hotel and real estate industries. Turgeon ultimately retired from the U.S. Postal Service’s Central Massachusetts Processing and Distribution Center in 2008.

Along the way, Turgeon was able to make investments and see them grow. He’d thought for years about establishing scholarships in honor of his parents and, as he approaches age 80, figured this was a good time to do it.

Turgeon has never been back to the Ole Miss campus since he graduated. He thumbs through each issue of the Ole Miss Alumni Review and cheers for the Rebels when they play sports on TV.

Still, he thinks often about his time on the campus — particularly, of having witnessed one of the pivotal events in American Civil Rights history.

“It’s like somebody going to war; you can’t get it out of your head,” he said. “That experience shaped me, both in seeing the hate and in meeting so many good people along the way.”

Mississippians from the Civil Rights era like Fannie Lou Hamer continue to inspire Turgeon, as do today’s leaders who are helping to redefine Mississippi and the university.

“Fannie Lou Hamer really impressed me,” he said. “I’d like to establish something in her honor, too. And if it wasn’t for former Chancellor Robert Khayat, I’m not sure I would have established this endowment. But I’m proud of the work he started that continues today.”