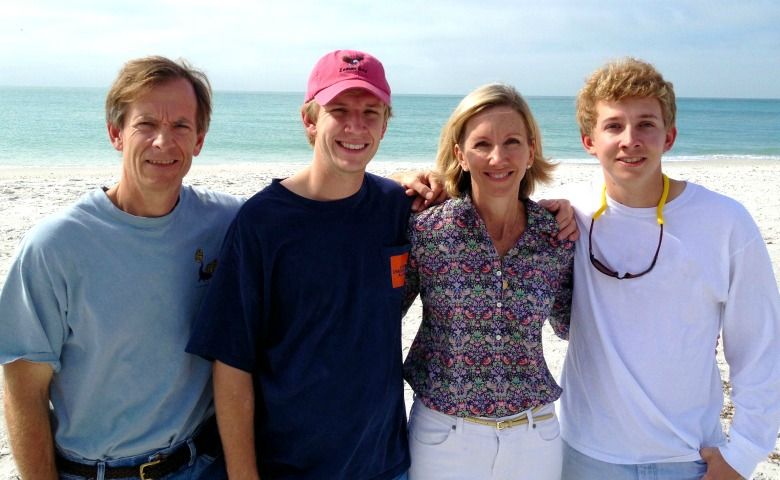 When it comes to generosity toward the University of Mississippi School of Engineering, the Hastings family of Houston, Texas, is a shining example.

The Hastings (John, his wife, Sarah, and sons Harrison and Andrew) made an initial unrestricted gift of $15,000 for the greatest need within the Department of Geology and Geological Engineering. Recently, the couple donated an additional $5,000. Both gifts were made through their Hastings Family Fund.

With these two gifts, geology department administration and UM Foundation staff collaborated to create the Department of Geology Faculty Support Fund specifically to address anticipated teaching needs and opportunities. The financial support has already enhanced tailor-made classes and programming for the department and the engineering school.

“For more than two decades, we have relied on a consortium of universities organized by the South Dakota School of Mines and Technology to conduct the traditional field camp experience for our students,” said Gregg Davidson, chair and professor of geology and geological engineering. “A year ago, the faculty decided that in order to meet the particular needs of our students, we needed to start our own field camp.”

This decision required two GE faculty members, Terry Panhorst and Robert Holt, to invest several weeks of their own time in Oklahoma and New Mexico to develop field exercises.

“The timing of the Hastings gift was perfect, as it allowed us to offset the cost of their travel and to compensate the instructors for their time.” Davidson said. “They gave $15,000 that has gone toward the development of our own summer field camp program.”

Two camps were held: an introductory one and a more advanced camp.

“The introductory camp (GE 301) required two sessions because of the large number of students needing to take it,” said Panhorst, an assistant professor. “The first session ran the second half of May, and the second session was the first half of June. Both sessions were held in the Arbuckle Mountains of south central Oklahoma, which is about midway between Oklahoma City and Dallas.”

Thirty-eight students attended the first session, and 21 students were in the second session.

The advanced camp (GE 401) will be operated by Holt, an associate professor. Based in Santa Fe, New Mexico, the camp runs during the first half of August. About 35 students attended the inaugural session.

“The camps are designed to give the students experience in the field with basic geologic procedures, such as measuring and describing rock units, creation of geologic maps based on field observations and application of engineering fundamentals to evaluating sites for development,” Panhorst said.

“We as a family want to help support Ole Miss and specifically the geology and geological engineering department within the university,” John Hastings said. “We are pleased to be able to help the department in their efforts to produce engineers who will go out into the world and make positive impacts through their professional passion and excellence.”

Hastings worked for Shell Oil Co. from 1984 to 1994 and for Edge Petroleum from 1994 to 2005. He is owner and executive vice president of exploration for Paloma Resources LLC. He graduated from Dartmouth College with a bachelor’s degree in earth sciences and from Texas A&M University with a master’s degree in geology.

The Hastings’ donation has already proven very beneficial to the program, said Panhorst, who spent the week of spring break in Oklahoma attempting to find suitable places for meaningful projects where he and about 40 students could gain access.

“Altogether, I spent about 16 days in the Oklahoma field area, spread between January, March and April, attempting to generate a coherent set of projects,” he said.

Charitable gifts are the foundation for many School of Engineering activities.

For more information on supporting the UM Department of Geology and Geological Engineering, contact Kevin Gardner, development officer, at 662-915-7601 or kevin@olemiss.edu.