skip to Main Content
Couple gives back to UMMC 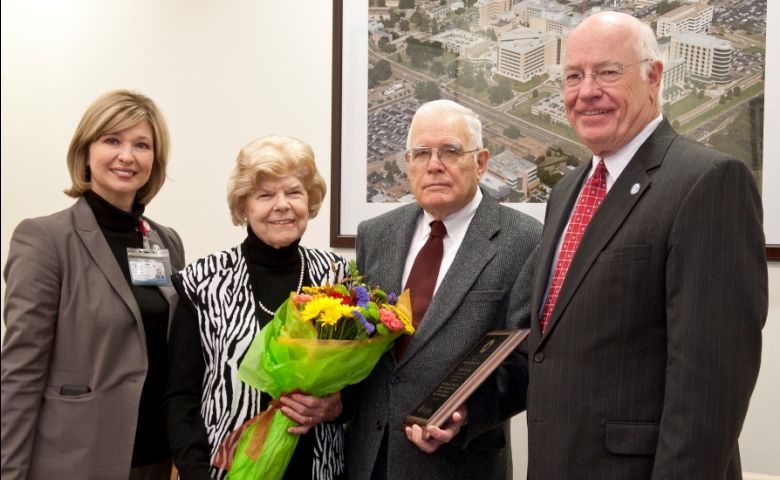 Dr. LouAnn Woodward (left), Vice Dean and Associate Vice Chancellor for Health Affairs, and Dr. James Keeton (right), Vice Chancellor for Health Affairs and Dean of the School of Medicine, thank Dr. Margie Lancaster Smith and Dr. Ed Smith for creating a scholarship endowment that will continue their dedication to the field of medicine for generations of medical students at UMMC.

As a new employee of the state Health Department Laboratory, then located behind the Old Capitol in Jackson, Margie Lancaster kept up with construction of the University of Mississippi Medical Center School of Medicine just blocks away on North State Street.

She resolved then she’d one day work at the new facility, and six months later, in January 1956, she landed a job as a research assistant in the new Department of Medicine.

Fast forward to 1969, when she graduated from the School of Medicine and after an internship and residency in neurology, began a long career at the Mississippi State Hospital at Whitfield. Her ties to UMMC, however, remain strong, as they do for her husband Ed Smith, a retired pathologist who graduated from the School of Medicine in 1959 and worked in physiology with internationally acclaimed physician and researcher Dr. Arthur Guyton.

The couple’s devotion is exemplified through their creation of the Drs. Edward E. and Margie Lancaster Smith School of Medicine Scholarship Endowment. The first scholarship will be awarded in 2015 to a student ranking in the top 10 percent of the entering first-year class, covering about 55 percent of the recipient’s tuition. The scholarship is renewable based on satisfactory academic performance.

“With current year’s tuition costing medical students roughly $25,000, this is a major gift and will change the lives of some of Mississippi’s best and brightest future physicians,” said Natalie Hutto, UMMC Office of Development director of gift planning.

She’d dreamed of medical school, Margie Smith said, but as one of four children, dollars were in short supply. “I was talking to the head of the Department of Biochemistry one day, and he asked me why I wasn’t going to medical school.”

She had completed a master’s degree in 1965. “I told him I didn’t think they would accept someone at my age. He advised me to apply,” she said.

Margie enrolled the following fall, completing her residency at UMMC and becoming a staff physician at the State Hospital.  “I loved working at Whitfield. We had all kinds of neurological diseases,” she remembered.

The endowment is a way for the Hinds County couple to give back to a school that was so good to them. Their gift of coins and a stock transfer also provides a tax benefit.  Both gifts saved the Smiths on capital gains tax.

“I have been helped by so many people at the university,” Margie said. “They admitted me to medical school when I didn’t think they would. Everyone encouraged me. Now, I want to help someone else.”

To contribute to the Drs. Edward E. and Margie Lancaster Smith School of Medicine Scholarship Endowment or to discuss creating an endowment for the UM School of Medicine, contact Natalie Hutto at nhutto@umc.edu or (601) 984-2306.