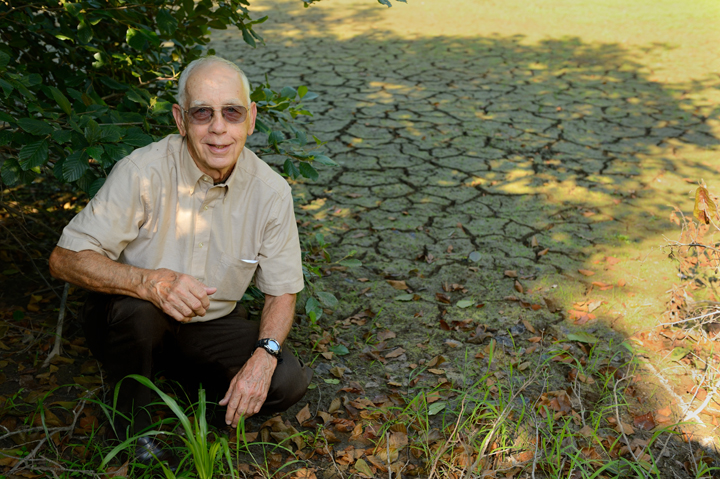 As a professor of biology at the University of Mississippi from 1976 to 2005, Edmund Keiser loved the traditional classroom setting – with its blackboards, books and attentive students at their desks – as much as he enjoyed his field research, trudging through bayou swamps and hiking verdant forests in search of unique specimens of frogs, snakes and lizards.

Now, even in his retirement years, Keiser's dedication to students and research continues to pay dividends for future generations, thanks to a $100,000 faculty support endowment recently established in his name by an anonymous donor.

"An endowment such as this will allow us to support a faculty research project each summer, which is very helpful particularly to new faculty who are trying to get their research programs up and running," said Paul Lago, chair of the UM Department of Biology. "From the research mission standpoint, these grants are invaluable. Without them, people have to teach summer classes, which really limit their ability to perform meaningful experiments or conduct significant field work."

Keiser, who served as chair of the biology from 1976 to 1987, said he was "stunned" to learn of the endowment established in his name. "I'm very flattered and feel a bit undeserving," he said. "It was a great honor to me. I can't imagine anyone doing something like this. People often give that kind of money for athletics but not for academics. I appreciate it very, very much."

Since retiring in 2005, Keiser, who earned a bachelor's and master's degrees from Southern Illinois University and a doctorate from Louisiana State University, has continued his research in wildlife biology for the U.S. Fish and Wildlife Service and the Mississippi Department of Wildlife, Fisheries and Parks (MDWFP), working on a comprehensive inventory of mammals, reptiles and amphibians in North Mississippi's Upper Sardis Wildlife Management Area. He has 57 years of experience as an educator, including teaching fourth-grade, junior high and high school classes in his younger days, and leading upper-level college courses at the University of Louisiana-Lafayette before coming to Ole Miss.

A renowned expert on amphibians and reptiles, Keiser has helped demonstrate the profound influence of those animals on woodland and aquatic ecosystems and on other species populations. He has authored four booklets on the subject for UM's Biological Field Station and also has published booklets on Mississippi and Louisiana venomous snakes, neotropical vine snakes, and Louisiana reptiles and amphibians.

Keiser served as commissioner of the MDWFP under governors Cliff Finch and William Winter and was recognized by UM's College of Liberal Arts as the Outstanding Teacher of the Year in 2000. Prior to joining the Ole Miss faculty, he received citations for outstanding teaching from the Illinois Superintendent of Education and the National Science Teachers Association, served as the Louisiana State Director of Science Teaching for the Louisiana Academy of Science and received the 1973 Distinguished Professor Award from the University of Southwestern Louisiana.

Upon arriving at Ole Miss in 1976, Keiser quickly made an impact on the biology department, Lago said. "Dr. Keiser was the first chairman in biology to emphasize the importance of research in our mission. During his 10-year tenure as chair, this department began moving in the right direction in terms of a three-pronged mission: research, teaching and service. He is responsible for laying the foundation of what this department has become. He set the standard high in the classroom and in faculty direction of graduate students. He stepped down as chair in the mid-1980s, but his mark was made and is still easily seen in the department."

Lago and Keiser arrived at Ole Miss the same year and became good friends. "His early guidance in my career certainly was instrumental in any success I have had," Lago said. "He is the consummate scholar, and, although we have had – and do have – many excellent teachers in the department, he is at the top of the list. And I am not saying that just for effect. He is, without a doubt, one of the best lecturers I have ever experienced."

In addition to research, Keiser stays busy teaching one course most semesters at UM, writing book reviews and running a business, Ecological Consulting. "I'd rather keep even busier," he said. "Retirement in itself is boring. But I was one of those people who lucked out and got a job that I loved doing, both the research part and the teaching part. I consider myself very lucky."

The Edmund Keiser Faculty Support Endowment is open to receive gifts from individuals and organizations by sending a check to the University of Mississippi Foundation, 406 University Avenue, Oxford, MS 38655, contacting Denson Hollis at 662-915-5092 or dhollis@olemiss.edu, or by visiting www.umfoundation.com/makeagift.