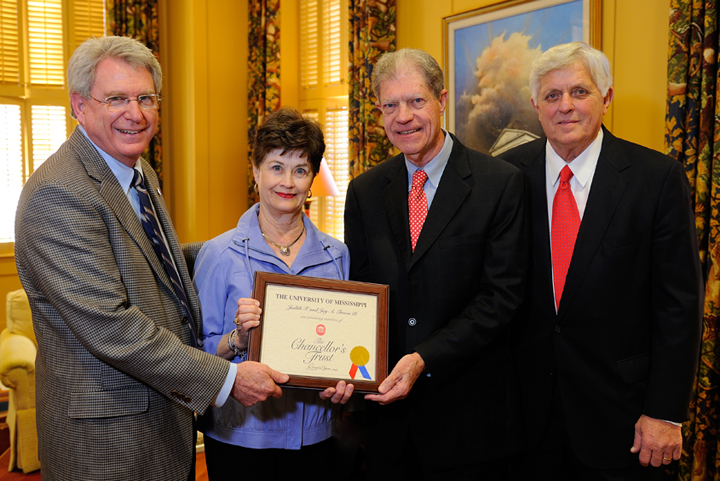 Judith and Jay Travis III of Jackson found each other, grew intellectually, became leaders and nurtured many friendships during their student days at the University of Mississippi. Now the couple is continuing a tradition of giving back to strengthen their alma mater.

"We enjoyed our experiences at Ole Miss as students and through the years as alumni," said Jay Travis. "We both were taught by our parents to give to other people. We have been blessed and want to help others with these funds."

Travis and Khayat had similar paths as students, as they were active in campus activities, members of the Phi Delta Theta fraternity and law students. The former chancellor applauded the couple for their longtime involvement in the life of the university.

"Jay and Judith Travis are a wonderful Ole Miss couple who have consistently supported the university for many years. We have been friends for more than 50 years, and I have loved watching their personal and professional successes. They have an extraordinary family, including a daughter who is a physician at the University of Mississippi Medical Center.

"Jay was universally respected and admired by his fellow lawyers as well as his many clients, while Judith is loved by all who know her. It is so typical for them to quietly make a significant gift to the university that will benefit many bright, deserving students," Khayat said.

The couple's gift to the Chancellor's Trust is the latest in their longtime support, and among other gifts are those to UM's School of Law, College of Liberal Arts, Alumni House renovation, Paris-Yates Chapel and more.

"We wanted to do something more to help the university; we wanted to give back," said Jay Travis, who recently retired as a partner in Butler Snow, a respected law firm with offices in five states. "We believe through the Chancellor's Trust our resources can be directed in a manner that will help students."

Judith Travis ? who transferred to the university from Agnes Scott College holds an undergraduate degree in social studies from the College of Liberal Arts and was involved in Associated Student Body, Mortar Board and the Chi Omega sorority. "Ole Miss is such a special place – it is always about family. Ole Miss has also made so much progress since we were here as students. Robert Khayat's influence has been spectacular, and we wanted to do something to honor his contributions and also help the university," she said.

UM Chancellor Dan Jones commended the Travises' support. "Judith and Jay Travis are outstanding alumni who have chosen to be actively involved with their alma mater for many years. We thank them for expressing their deep affection for Ole Miss through this unrestricted gift. Because of this generosity, many students' lives will be changed through enriching educational opportunities."

Ole Miss has been a part of the couple's lives for decades. "I decided in high school that I wanted to go to law school," said Jay Travis, whose areas of practice focused on estate planning and administration, and fiduciary litigation. "Family and friends told me if I wanted to practice law in Mississippi, I needed to go to Ole Miss. I have enjoyed a long career interacting with several generations of families as clients."

Travis is a fellow and former state chair of the American College of Trust and Estate Counsel and a member of the Board of Regents. He is a past president of the UM Law Alumni Association and has served on the UM Foundation Board of Directors and the Momentum Campaign Planned Giving Committee.

The Travises are the parents of three grown children: Dr. Kathy Gregg of Jackson, a graduate of the University of Mississippi School of Medicine; and John Travis of Phoenix, Ariz., and William Travis of Jackson, both graduates of Ole Miss. The couple also enjoys four grandchildren.

For more information on becoming a member of the Chancellor's Trust, contact Debbie Vaughn, senior executive director of development, at 662-915-1687 or dvaughn@olemiss.edu; or visit www.umfoundation.com/makeagift.