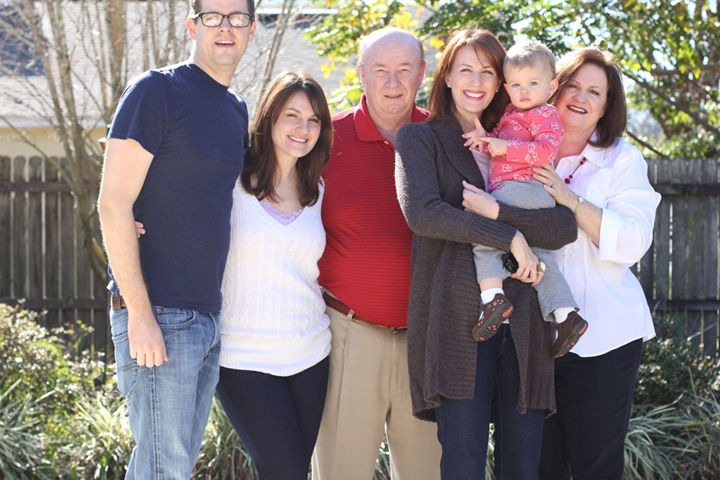 The Emily and Larry Furlong Family

University of Mississippi alumni Larry and Emily (Caldwell) Furlong spent much of their adult lives helping students in Florida's Seminole County pursue college education through academic scholarships. Now, with the establishment of the Furlong Family Scholarship Endowment at Ole Miss, the Furlongs of Maitland, Fla., have widened their reach, providing an opportunity for undergraduate students from four states to attend their alma mater.

"My wife and I met at Ole Miss," said Larry Furlong, vice president of sales with Old Republic National Title Insurance Company. "Both of our daughters graduated from Ole Miss. We're an Ole Miss family, even though none of us are from Mississippi."

The Furlong Family Scholarship Endowment provides financial assistance to undergraduate students enrolled in UM's College of Liberal Arts. First preference will be given to students from Illinois, Florida, California and Nashville, Tenn.

"We are grateful to Emily and Larry Furlong for their deeply held commitment to providing educational opportunities to young people" said Glenn Hopkins, dean of liberal arts. "We are fortunate to have this family of graduates giving back to strengthen the College of Liberal Arts. It's a reflection of their belief in the power of education and of their concern for others."

A native of Chicago, Furlong had never set foot in Mississippi until he arrived at Ole Miss in 1968. "I thought I had landed on another planet," he recalled. "It was so different from where I grew up. It took me a good semester to adjust. But once I got used to the pace and the culture, I just fell in love with it."

Furlong, a political science major and Phi Kappa Theta fraternity member, soon fell in love with a classmate, too, after meeting Emily Caldwell, a Nashville native majoring in sociology and art. "We took a class together called Social Programs, so if that won't seal a great marriage, nothing will," she said.

Larry Furlong graduated in 1971, and she finished a year later. They married in 1973. Larry entered the title insurance business in 1978 with the help of one of his fraternity brothers. After the couple moved to Florida in 1980, he also enjoyed a 12-year stint in public service, including four years as a Seminole County Commissioner and eight years as a member of the Seminole County School Board.

"We've had a tradition of helping students with scholarships," Emily Furlong said. "When Larry ran for office, he promised to give a portion of his salary back to the county for scholarships. We did that for 12 years and were able to help 72 students with more than $40,000 in one-time scholarships for college or vocational/technical school. It was very rewarding to help young people get an education."

Philanthropy has also played a key role in Emily Furlong's career. She serves as senior program manager for the Rollins College Philanthropy & Nonprofit Leadership Center, which provides education and management assistance to nonprofit and philanthropic organizations.

"Since we've always had a commitment to education, once we weren't funding the local scholarships anymore, we decided to do something for our alma mater," she said.

Both of the Furlongs' daughters attended UM on scholarships, with older daughter Katie Ward earning degrees in theatre arts and broadcast journalism, while Mary graduated in history and anthropology. Ward is now an actress living in California with her husband and daughter, and Mary Furlong is earning a doctorate in anthropology at the University of Maryland.

"Their scholarships were a real boon to us financially, so this endowment was our way of giving back to the university for its generosity to our children," Larry said. "We chose the College of Liberal Arts because all four of us were liberal arts majors. We decided to award the scholarships to applicants from the states where we were originally from or where we had lived the longest."

The Furlongs also helped found the Central Florida Ole Miss Alumni Club in the early 1980s and have served as club officers throughout the years. Additionally, Larry is working to restart a PKT chapter at Ole Miss. The couple returns to Oxford for football games and other events whenever possible. "It's hard to have a bad time there," Emily Furlong said.

The Furlongs encourage others to consider supporting UM.

"It's an opportunity to invest in the future of Mississippi and our country by investing in the lives of some incredible young people," Emily Furlong said. "We're always impressed with how many Ole Miss alumni are spread throughout the country. Anywhere you go, you'll hear someone saying, ‘Hotty Toddy!' By helping these students, you're not just investing in Lafayette County; you're investing in the world because there are Ole Miss Rebels everywhere."

Larry Furlong agreed, adding, "If you give someone clothes or a meal, that's great, and it helps in the near term. But if you can help give someone an education, that will benefit them for a lifetime."

The Furlong Family Scholarship Endowment is open to receive gifts from individuals and organizations by sending a check with the fund noted to the University of Mississippi Foundation, 406 University Avenue, Oxford, MS 38655; by visiting www.umfoundation.com/makeagift; or by contacting Denson Hollis at 662-915-5092 or dhollis@olemiss.edu.