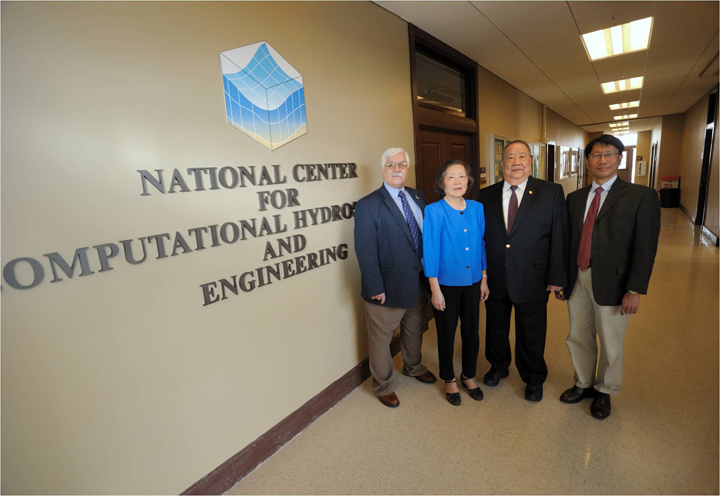 An educator, prominent hydroscience and engineering researcher, and administrator whose work has brought international attention to the University of Mississippi for more than four decades has contributed $100,000 to create an endowment encouraging other university professionals in their work.

Through the program, an advisory council will select recipients from the NCCHE community. In odd years, the top faculty member will receive $3,000 and the student $500, and in even years, the chosen scientist will receive $2,500 and the support staff $1,000.

"I always think of NCCHE as my child; I created it and want to see it enjoy continued growth," Wang said. "It is difficult to recruit and retain talented people when salaries may not be at the level as other renowned institutions. My wife and I want to reward highly productive individuals in their work. We feel that it's not enough to help only faculty members and researchers. To enhance overall NCCHE successes, we must also give awards to support personnel and students."

The Wangs said they hope to eventually build the new fund to a level that produces adequate annual income to support an endowed professorship that can be utilized to attract a prominent senior scientist to provide leadership and recognition for strengthening the center and bringing international recognition to the university.

"I want to see the center become stronger and greater as time goes on," Wang said. "My wife and I hope our gift helps inspires others to provide private support."

Wang has firsthand experience with positive reinforcement that comes from receiving professional recognition. He was one of UM's first four Frederick A.P. Barnard Distinguished Professors in 1988, the highest faculty accolade on the Oxford campus. He was renominated and reselected for a second term in 1993, and was awarded the Barnard Distinguished Professor title for life in 1998. Wang was chosen for the inaugural Distinguished Research and Creative Achievement Award and Outstanding Engineering Faculty Awards as well as many other UM awards.

A pioneer in applying computational modeling methodology to hydroscience research, Wang has gained worldwide recognition. Among numerous accolades, he has received the Hans Albert Einstein Award from the American Society of Civil Engineers and the Qian Ning Prize from the World Association for Sedimentation and Erosion Research, the two highest international honors presented to a researcher selected worldwide for his or her lifetime distinguished achievements in hydrodynamics, soil erosion and sediment transport research.

"We deeply appreciate Dr. and Mrs. Wang for generously funding this endowment to honor the work of other talented faculty, researchers, students and staff," said Alex Cheng, dean of engineering. "To have someone of Dr. Wang's stature reach out to support members of the NCCHE and School of Engineering family is both very meaningful. His body of work has tremendously strengthened the reputation of the school and overall university community, and he and his wife have found yet another way to nurture others and encourage exceptional work."

NCCHE has made significant contributions including the advancement of computational modeling and simulation of free surface flows, soil erosion, sediment transport and morphological processes in streams, reservoirs, and channel networks in watersheds. NCCHE has been invited by prestigious professional societies to host several major international conferences and has hosted many renowned visiting scientists. Wang chaired conferences and delivered keynotes and special lectures at professional meetings and research institutes in more than 30 countries on six continents.

"The computational models simulating the environmental, water resources and soil conservation phenomena of our contemporary society have been utilized by thousands of professionals in institutions worldwide," Wang said. "We can all take pride in the prominence the NCCHE has earned."

Among Wang's publications include nine books, two invited chapters, more than 200 journal articles, proceeding papers, and conference presentations. He holds a doctoral degree in computational hydrodynamics, a master's degree in fluid mechanics from the University of Rochester and a bachelor's degree in mechanical engineering from the National Cheng Kung University in Taiwan. He first came to Ole Miss in 1967 as an assistant professor due to the counsel of Professor John A. Fox, then UM chair of mechanical engineering. Although Wang retired from UM in 2010, he continues as a part-time research professor.

The Wangs are the parents of two: David Wang, a mechanical engineering graduate, works in the computer software field in California, and Susan Wang is pursuing a doctorate in engineering at UM.

The UM-NCCHE Founder's Endowment for Excellence is open to accept contributions from other individuals and organizations. Those wishing to provide support can mail a check with the fund noted to the University of Mississippi Foundation, P.O. Box 248, Oxford, MS 38655; visit www.umfoundation.com/makeagift; or contact Kevin Gardner, development officer for engineering, at 662-915-7601 or kevin@olemiss.edu.