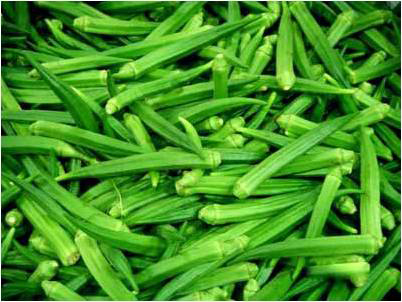 Okra has long been the quintessential Southern food, a vegetable so versatile that it can be deep-fried in batter, boiled with tomatoes, pickled in brine or tossed into a big pot of simmering gumbo, bringing a unique and unmistakable flavor to every dish. Now it has a new role in Southern culinary culture – a symbol of donors' generosity in support of the Southern Foodways Alliance (SFA), an institute of the Center for the Study of Southern Culture (CSSC) at the University of Mississippi.

The SFA, a member-supported, non-profit organization that documents, studies and celebrates the diverse food cultures of the changing American South, recently established the Order of the Okra, a society of donors who each pledge a total of $10,000 over 10 years, with the money going to support the SFA's mission. Hall said the SFA had originally hoped to attract 25 members to the Order of the Okra. It has since drawn 29 members, and now the goal is to bring in 50 by the end of the fiscal year.

"A small percentage of our operating budget comes from the university. We raise the rest," said SFA director John T. Edge. "We have an ambitious 10-year plan that focuses on scholarship, support for foodways students, and production of oral histories and films. These dollars will help us do that good work.

SFA events manager Melissa Hall said that the majority of funding has come from corporate donors who contribute at least $25,000 a year for three years. Additionally, annual SFA membership dues – $50 for students, $75 for individuals and $100 for families – net more than $40,000 per year.

"What we haven't done in the past is to ask individual members to be regular financial supporters," Hall said. "That's how the Order of the Okra came about. SFA members are very passionate about the organization, and we feel really fortunate to have that passion. We wanted to see the SFA's documentary and academic work flourish, so we decided it was time to see if that passion would translate into dollars by turning to the membership and asking if they'd be willing to support us this way."

Founded in 1999, the SFA has accomplished a great deal with a small staff. It has collected more than 600 oral histories and made more than 30 films, covering topics ranging from barbecue in North Carolina and boudin in Louisiana to Chinese grocers and Lebanese restaurateurs in Mississippi. It has earned praise in national publications like The New York Times, The National Review, The Atlantic Monthly and Travel & Leisure.

"Like literature, like music, like art, food is a product of people and place," Edge said. "Understand what we raise, cook, serve and eat, and you understand the region. The CSSC pioneered the multifaceted study of the South, with particular emphasis on literature, history and music. The SFA has led the national charge to study our foodways. And the University of Mississippi is in a great position to leverage that 14-year track record of work."

Its Southern Foodways Symposium attracts authors, journalists, chefs, scholars and engaged consumers from across the United States for lectures, readings, tastings and performances.

SFA also stages regional such events as Potlikker Film Festivals in cities like Charleston and New Orleans and Stir the Pot suppers in Raleigh and Nashville.

As SFA has grown, its academic component has expanded as well. "Successful fundraising has allowed us to increase our academic commitment to Southern foodways," Hall said. "We are in the inaugural year of our post-doctoral fellowship, a program that allows a recently minted Ph.D. to spend a year or two writing about and teaching foodways classes. And we are looking forward to the day when we, in conjunction with the College of Liberal Arts, have the funding to hire a fulltime foodways professor."

"The diversity of those in attendance, from the Southern Studies students and SFA staff … to the chefs, cooks, farmers, brewers, writers and plain old civilians, was astounding," he said. "Here were people of various disciplines, generations, races and classes, gathered in celebration and soaking up one another's ideas and stories, along with the wonderful films, food and music."

That event inspired Oglesby to become an active member and supporter of the SFA.

"As a financial professional, my career was built analyzing the financial health of companies and projects to determine if they're well-managed and financially viable," he said. "The window I now have into the financial discipline and good stewardship of the limited resources of the SFA has further inspired me. I know that any money I give or assist the school and staff in raising will be well-deployed in expanding the university's leading role in this field of study. I know that every dollar will support the gathering of more oral histories, documentary film work, dedicated course offerings, scholarships, and, one day, hopefully, an endowed professorship."

The Southern Foodways Alliance is open to receive gifts from individuals and organizations by sending a check to the University of Mississippi Foundation, 406 University Avenue, Oxford, MS 38655 or by visiting www.umfoundation.com/makeagift.