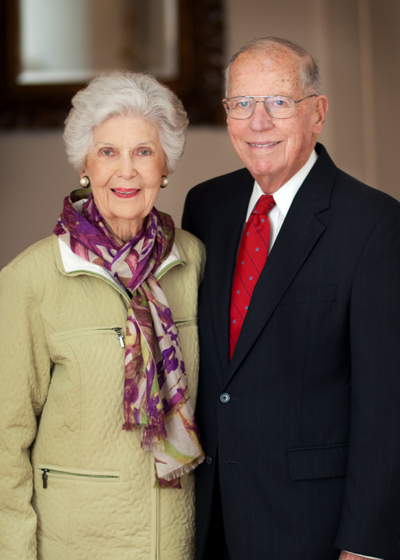 Mississippi's 58th governor and first lady, community builders William and Elise Winter, will receive the third annual Legacy Award from the Ole Miss Women's Council for Philanthropy April 21 at the University of Mississippi.

The Legacy Award recognizes the contributions of individuals who epitomize the council's goals of philanthropy, leadership and mentorship. The Winters will appear at a 10 a.m. public ceremony in the Overby Center Auditorium. Admission is free, but registration is required.

"William and Elise Winter have lived their lives giving back to their state, their university, their community and their family," said Jackson attorney Kathryn Hester, chair of the OMWC.  "Governor Winter, who championed education in Mississippi and racial reconciliation nationally, exemplifies one of the best leadership role models in the country.

"Elise Winter's founding of, and involvement in, an affiliate of Habitat for Humanity, has afforded thousands of Mississippians the opportunity to give back to their communities and to their fellow citizens through one of the nation's most effective charities. If our Ole Miss Women's Council Scholars emulated just these two examples, our state would have the best of leadership and philanthropy for decades to come," Hester said.

Gov. Winter said he and his wife are flattered by the Legacy Award.

"Elise and I are aware that the goals and accomplishments of the Women's Council set some very high standards, and we can only promise to do our best to justify this honor. As we look around our native state today, we are immensely proud of what our fellow citizens have accomplished to make this a more attractive and desirable place in which to live. Some particular areas of progress have been in our greatly increased emphasis in providing better educational opportunities for all our citizens, in the elimination of racial segregation and blatant discrimination based on race, and in the increased national prestige and standing of Ole Miss and other institutions of learning in Mississippi.

"We have found there is no more satisfying or fulfilling work than that which is done in some kind of public service," Winter said. "There are so many community needs these days that can only be met by individual citizen volunteers, from building houses … to providing support for many struggling schools operating on diminished public funds."

The university's Institute for Racial Reconciliation and a history professorship are named for Winter as well as the state Archives and History Building. He has been honored with a special John F. Kennedy Profile in Courage Award for Lifetime Achievements. He has served as a Harvard University Institute of Politics fellow and on President Clinton's Advisory Board on Race.

Among leadership positions, he is chair of the National Commission on State and Local Public Service and president of the Mississippi Department of History Board of Trustees. He has also chaired the Kettering Foundation, National Civic League, Foundation for the Mid South, Commission on the Future of the South, Southern Regional Education Board and Southern Growth Policies Board.

"I've seen the plight of so many people and I've thought about mothers rearing children in horrible conditions. The need just cried out to me," Elise Winter said of her attendance at the first meeting to organize the Habitat for Humanity affiliate. "I never dreamed we would eventually build 500 homes, but we've had good leadership and staff. Now we are building neighborhoods because we recognize the importance of people having support systems."

Her book Dinner at the Mansion shares how she and Gov. Winter brought renowned guests to the Governor's Mansion and gave the state positive exposure on the national and international level. Proceeds from the recently reprinted book support Habitat for Humanity. The Winters, who met while students at Ole Miss, are also involved in the Fondren Renaissance Foundation, which helps preserve and revitalize the greater Fondren neighborhood in Jackson.

"William and Elise Winter have contributed in so many ways to improving the lives of fellow Mississippians for more than 65 years. As a team and as individuals they are remarkable for their work in the areas of education, conservation of natural resources, honest open government, better housing for the working poor, preservation of our historic sites, civic responsibility and racial reconciliation. In addition they are an example for all of us to follow in the things that make life worthwhile and meaningful. Quite simply they are the quintessential good citizens."

The Legacy Award is an initiative of the 12-year-old OMWC, a group that attracts scholarship funds, pairs recipients with mentors and provides leadership training. Male and female scholarship recipients pledge to "give back" through community service.

OMWC has built an endowment of almost $8.6 million and supports 61 scholarships, with each new scholarship recognized with a rosebush in a garden on campus. Those interested in helping students and using a naming opportunity to honor a special person may establish a scholarship. A contribution of $110,000 from an individual or $125,000 from a corporation or foundation can be paid in a lump sum or annually over several years. All sizes of contributions are welcome and used to further OMWC goals.

To register for the program honoring the Winters or to purchase a brunch ticket, visit www.olemissalumni.com/events or call Theresa Knight at 662-915-1586. To learn more about the OMWC, contact Sarah Hollis at 662-915-1584, or visit www.umfoundation.com/omwc.