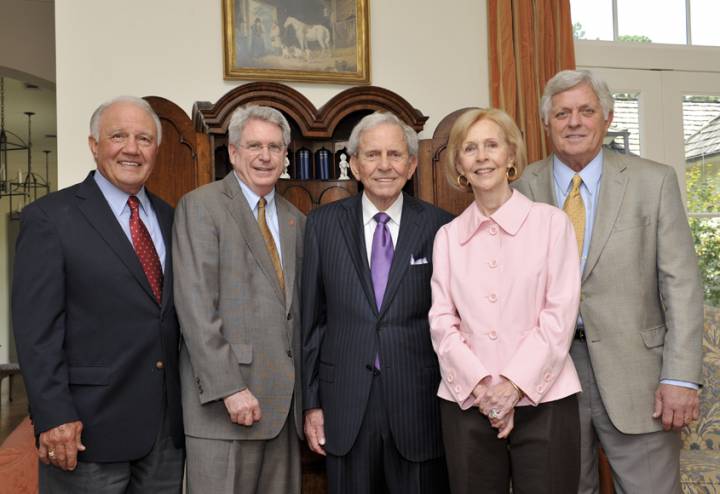 (OXFORD, Miss.) – Successful businessman Carl Herrin of Jackson remembers that for more than three years he stuck out his thumb and hitchhiked to travel the 115 miles from his hometown of Durant to the University of Mississippi to earn a college degree. To help students who may be experiencing financial hardships, Herrin and his wife, Nancy, have created a scholarship endowment with a gift totaling more than $1 million.

The Carl and Nancy Herrin Scholarship Endowment will annually provide 10 need-based scholarships in the amount of $5,000 each to Mississippians. Longtime supporters, the Herrins previously made a $1 million gift to Ole Miss Athletics to strengthen programs for student-athletes and have provided resources to other UM initiatives.

“I relate to poor students who need scholarships,” said Carl Herrin, a 1949 business graduate. “My family was very poor, and I accelerated my studies at Ole Miss in order to graduate early. Those were different times, and I could go anywhere by setting down my suitcase with its Ole Miss sticker and thumbing a ride. After graduation I sought a job with a company that furnished a car and joined General Motors in its insurance division.”

Herrin’s astute business sense and education not only provided him his first car but also transported him on a career path that has focused on building business holdings of multiple auto dealerships and oil and gas interests. However, he has always “come home” to his alma mater.

“I love Ole Miss,” Herrin said. “It is part of me, and it truly is a unique institution. The important thing about this scholarship endowment is that it will go on long after we’re gone. The costs associated with attending college keep increasing each year, and it seems the government may be cutting back on assistance. Education is critical to families and to our state.”

The $1,015,000 Herrin Scholarship Endowment will be held permanently, with the annual interest income funding the scholarships.

“Carl and Nancy Herrin have given the gift of education and opportunity – tremendous resources that will dramatically change lives and move our state and region forward,” UM Chancellor Dan Jones said. “Significant numbers of Mississippi families simply are unable to cover the costs of higher education, and our university is working to address access and affordability issues. We are profoundly grateful to the Herrins for their vision for young people and their willingness to help impact this issue. Providing assistance to current and future generations is a powerful legacy.”

Carl Herrin first began his long association with UM after his three-year service in the U.S. Navy during World War II. He attended UM during a time of change for the Oxford campus. The GI Bill paid the way for Herrin and many other students to study at UM, which sent enrollment soaring to approximately 3,200. Enrollment for the 2010-11 academic year was 19,536 on all campuses.

When Herrin completed his business degree at Ole Miss and had worked for General Motors, he and his brother opened Dodge-Plymouth dealership in Lexington. Herrin was hired in 1952 to join the team of the new Milner Chevrolet dealership in Jackson. Within a decade, Herrin had moved from service salesman to general manager. He was responsible for implementing sales and marketing programs that produced record-breaking results. A few years later, Dumas Milner – a noted Mississippi businessman – opened a Cadillac dealership in Jackson and sold his Chevrolet dealership to Herrin and George Gear.

Today Herrin and his son, Ole Miss business alumnus Jack Herrin, own a number of auto dealerships in Jackson, including those for Lexus, Infiniti, BMW, Toyota and Chevrolet. Jack Herrin, president, now directs day-to-day business operations of the companies, and Carl Herrin serves as chairman of the board.

“Carl credits the University of Mississippi as giving him the foundation needed for his career,” said Nancy Herrin, who also attended Ole Miss and is a Durant native. “He wants to give back to the school that gave him so much. I’m glad we are able to do this for students who are less fortunate so that they can earn college degrees at our university. There’s no other place in the world quite like Ole Miss.”

The Herrins, who have been married for 59 years, not only have supported the university but also return to campus for events, including football games. In addition to the Herrins’ son, the couple’s daughter and son-in-law, Holley and Don Noblitt Jr., and their son and daughter all pursued business degrees at Ole Miss.

“We thank Carl and Nancy Herrin, extraordinary people, who care deeply about future generations and our university,” said UM Chancellor Emeritus Robert Khayat. “The Herrins understand that educational opportunities are absolutely critical to our state. We believe students as well as other alumni and friends will be inspired by this incredibly successful and generous family.”

“Carl and Nancy Herrin have been special friends of mine for more than 40 years and have been devoted members of the Ole Miss family for even longer,” Alford said. “This couple is always reaching out to help people. We are pleased that their names will be permanently and appropriately linked to the University of Mississippi through this scholarship endowment.”