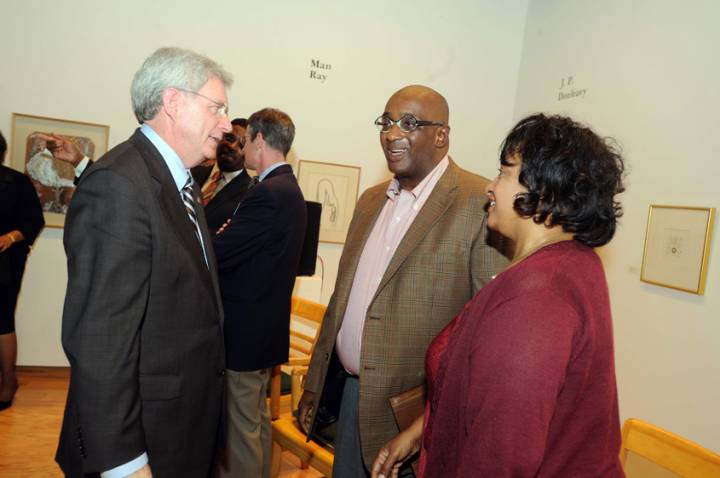 (OXFORD, Miss.) – To pay tribute to the life of Hattie Mae Edmonds of Clarksville, Tenn., a gallery in her name has been created to exhibit and explore folk art at the University of Mississippi Museum, thanks to gifts from alumni and friends.

The gallery, which has already hosted several exhibits, is a fitting way to pay tribute to her life, said her son and UM alumnus Mike Edmonds, vice president of student life and dean of students at Colorado College in Colorado Springs.

“My mother was indeed a Southerner, and her name “Hattie Mae” reflects that clearly,” he said. “She also taught her children to admire and treasure the beauty of the South, family, friends, struggle, joy and nature. All of these things are represented in folk art. The Edmonds family remains grateful to our friends from all over who made this happen. We feel blessed and fortunate to have our mother remembered in such a way that allows for her memory to be alive and relevant.”

When his mother passed away in January 2010, Edmonds said he received calls from many friends asking where to send memorials.

“It only took a little while for me to say, ‘Ole Miss’ because my mother was so proud that she was able to provide me an opportunity to attend Ole Miss. My mother never had the chance to go to college but valued and loved education so much – and loved Ole Miss.”

Edmonds’ time on the Oxford campus was marked by a family loss.

“When my father died during my sophomore year at Ole Miss, my mother insisted that I return to Ole Miss and made sure I was able to do so,” he said. “Mother knew Ole Miss was a special and dear place. She loved her association with Ole Miss through me, her youngest child and only son. She followed Rebels sports teams and read any and all things about the university.”

“Mike was introduced to the museum at a critical juncture in our history,” said William Andrews, director of the University Museum.  “As we recognized the pressing need to represent selections from the permanent collection of folk art, another world-class collection at the museum, we realized the only way would either be through interior construction, or by an addition to the building.  From our conversation, Mike and I quickly discovered a mutual love of folk art from the American South. It didn’t take us long to come up with a plan which would give Mike the opportunity to honor his mother and allow us to permanently present these important works of art.”

Edmonds and Andrews met through an introduction by portrait artist Jason Bouldin of Oxford. Edmonds approved of the plans Andrews has for the museum.

“I was very impressed and moved by his vision for the University Museum and thought, ‘What a precious way to honor my mother’s life,’” he said. “The University Museum preserves objects of art and beauty for people of the South to see and appreciate. Such a mission is so important in this highly technologically driven world. We all could benefit by reflecting and thinking about the beauty and art of our region.”

“The opening of ‘Defining the Mainstream’ was such a moving experience,” Edmonds said. “The exhibit captured so much of why the South is a special place to call home. Folk art has been a passion of mine since my days at Ole Miss. I was introduced to it by my mentor and second mother, Betty Jane Gary (former faculty member) and William Ferris (former director of UM’s Center for the Study of Southern Culture).”

Edmonds joined Colorado College 17 years ago. He also occasionally teaches on the faculty in the college’s drama/dance department. Prior to that, Edmonds was assistant dean of students and adjunct professor of theatre arts at UM. He holds an undergraduate degree in theatre arts and master’s and doctoral degrees in higher education administration with an emphasis in counseling, all from the Ole Miss. He completed a post-graduate institute at Harvard University.

Edmonds is active with civic and charitable organizations. Nationally, he is a member of UM’s Lott Institute Board of Trustees and treasurer of Delta Sigma Rho-Tau Kappa Alpha forensics honorary.