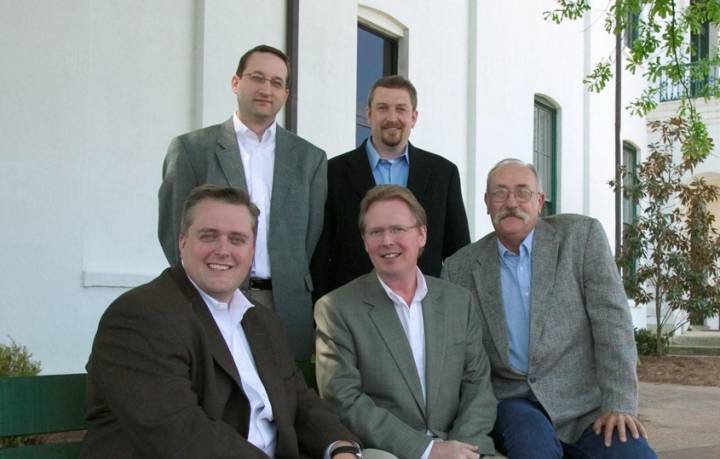 MME partners include (from left, front) Bill Lobb, Brian Reisetter and Mick Kolassa and (back) Doug Paul and Kevin Patterson.

(OXFORD, Miss.) – Gifts to the “Promises to Keep” campaign, together with two sizeable federal grants, have provided the School of Pharmacy with more than $10 million to meet is goals of constructing a pharmacy building at the University of Mississippi Medical Center and endowing scholarships and faculty support. Never has the school received so much in so short a time.

“It’s been exciting,” said Dean Barbara G. Wells, who announced the campaign in 2008, the school’s 100th anniversary. “As gifts and pledges came in, we saw how much people love this pharmacy school and care about its future.”

Several milestones stand out, such as the campaign’s lead gift, a pledge of more than $350,000 from Medical Marketing Economics LLC of Oxford. When fulfilled, the pharmacy administration department will have a $150,000 endowed fellowship bearing the company’s name, the Science Library on the Oxford campus will have $50,000 for an online database, and the school will have $150,000 to use in a variety of ways.

“Our company wouldn’t be here if it weren’t for the Ole Miss School of Pharmacy,” said MME CEO and Managing Partner E.M. “Mick” Kolassa. “It is where many of us met, the source of many of our employees and a major source of pride for all of us. We see this gift as a way for us to give back.”

The first significant corporate gift, $50,000, came from Walgreens for the new pharmacy building on the Medical Center campus. Two classrooms will be named for the pharmacy chain.

“Many Ole Miss pharmacy students intern with us through our summer internship program, then go to work for us full time,” said Walgreens District Manager Tonya Shackelford. “They are an asset to our company and the profession.”

Faculty support and student scholarships also received donor attention. Sarah Hollis, the development officer throughout the campaign, said contributions reflect how much people care about the school and each other.

“I saw alumni stepping forward to honor several of the school’s faculty members, and I helped several faculty members endow professorships or scholarships,” Hollis said. “Then others contributed to honor their friends and relatives. It was heartwarming to see the campaign bring out the best in people.”

“All of the school’s needs received some attention,” Wells said. “Words simply can’t express my gratitude for each and every gift and giver.”

Alumni Jim Ainsworth and Keith Shelly both committed $50,000 gifts that were applied to the building in Jackson. Ainsworth retired recently as a vice president for Baptist Memorial Health Care Corp. based in Memphis, and his wife, Sarah, joined him in making the gift.

“We wanted to support the university because it laid the foundation for outstanding professional and personal careers,” he said. A conference room will be named for the Ainsworths.

“The university is among the nation’s leaders in promoting excellence by providing quality instruction and prioritizing research,” Shelly said. “I am proud of that fact and recognize that maintaining this standard requires the emotional and financial support of those who have already benefitted from this great institution.”

His gift was tied to a naming opportunity in Faser Hall, where a plaque designates the J. Keith Shelly Conference Room.

Lt. Col. Rob Wall contributed $10,000 to name yet another office, and Leigh Ann Ross, associate dean and chair of pharmacy practice, gave $20,000 to honor her father, Louis H. Ramsey, and place his name on a conference room.

The Medical Center building, which is expected to be completed this fall, received two grants from the Health Resources and Service Administration.

“Campaign gifts, coupled with university funds and the two grants, made construction of our department’s new home possible,” said Ross. “People who go to school here don’t graduate and forget us. Their enthusiasm and devotion is truly gratifying, and it’s a hallmark of our school and our university.”

Allen Linton and her mother, Sara LeMaster Linton of Tupelo, gave $25,000 to seed the Linton Family Pharmacy Scholarship Endowment, which honors the many “Lintons” who obtained pharmacy degrees from Ole Miss. The first was Allen’s grandfather, the late Anderson Maltruverse Linton Sr., a1911 graduate, then Allen’s father, the late Anderson Maltruverse “A.M.” Linton Jr., and her mother, Sara.

“We have such pride in our family’s background, and Ole Miss is very dear to all of us,” Allen Linton said. “Having the gift of an Ole Miss education is a treasure, especially if passed on to future generations. My mother wanted to do this to help enrich the lives of others.”

Henry Cecil Caldwell earned his pharmacy degree and master’s degree in pharmaceutical organic chemistry in the 1950s and spent much of his career at SmithKline & French (now GlaxoSmithKline). His son, Brent, is a pharmaceutical chemist; his other son, Mark, often provides architectural services to pharmaceutical companies; and his daughter, Cecilia, a physician, once worked in the industry.

To honor this man they love and dearly miss, Cecilia, her mother, Bettye, and others created the Henry Cecil Caldwell Pharmacy Scholarship Endowment.

“Dad achieved great academic and professional success in his field, and we hope to make that level of success possible for future generations of deserving students,” Cecilia Caldwell said. “He believed strongly that all deserving students, even in the face of economic obstacles, should have access to higher education.”

“The idea of establishing a scholarship fund has always been appealing to Barbara and me,” he said. “Pharmacy education is a very invigorating, challenging academic environment, and creating a scholarship to help students pursuing this discipline seemed natural to us.”

The scholarship also stemmed from Garner’s pride in the school.

“The School of Pharmacy is extremely strong, and I have such respect for the faculty,” he said. “With the new pharmacy building being constructed in Jackson and the Thad Cochran Research Center being expanded on the Oxford campus, our teaching and research facilities will be the best in the nation.”

The Pharmacy Alumni Chapter also created a scholarship endowment, with funding coming from its annual golf tournament. Last year’s tournament raised more than $20,000, and this year’s contribution was nearly $18,000.

“We made this a need-based scholarship, so it can be used to help students facing financial challenges or unexpected emergencies,” said James A. Pittman Jr. of Madison, chapter president.

Most recently, Cardinal Health chose the pharmacy school to participate in its $1.1 million scholarship program. Recipients of the endowments, which range from $50,000 to $125,000, provide strong nuclear, independent or hospital pharmacy curricula. A Cardinal Health official said that the company is proud to partner with UM to develop tomorrow’s pharmacy leaders.

Baptist Memorial Hospital-North Mississippi in Oxford and North Mississippi Medical Center in Tupelo united to each fund half of a full-time faculty member for six years. By matching the gifts, the school hired two pharmacy practice professors.

“The school has an outstanding record for producing pharmacists for the state’s health-care industry,” said Gerald Wages, executive vice president of North Mississippi Health Services. “We are excited about helping in the school’s growth and look forward to working with many of its graduates.”

Baptist North Mississippi “is happy to partner with the Ole Miss pharmacy program,” said its CEO Don Hutson. “We value our collaborative relationship and look forward to extending pharmacy education into the future.”

The gifts, Wells said, “will allow us to grow our enrollment and better prepare our students to provide comprehensive medication management for patients throughout Mississippi.”

The dean and her husband, Richard, a retired pharmacist, also created an endowed professorship in pharmacy practice to help recruit and retain outstanding faculty. A scholarship the couple established earlier will provide an annual grant to a student.

“We wanted to do something that was significant and enduring to advance the School of Pharmacy,” Dean Wells said. “We hope this gift will inspire other faculty, alumni and friends to consider what they can do to support the teaching and research activities that have made the school one of the nation’s best.”

A few people might not look back after graduation, but Stan Williams of Fort Worth, Texas, isn’t one of them. “Life is all about a strong family, good friends and never forgetting where you came from,” he said.

In that spirit, he has not only served on the pharmacy school’s advisory board for a decade but also pledged a $1 million life insurance policy to the school.

The medicinal chemistry department honored its former chair, the late Joseph Sam, by establishing a distinguished alumni award in his name. The inaugural recipient of the award, funded by alumni and friends, is Michael Rogers, director of the pharmacology, physiology and biological chemistry division at NIH’s National Institute of General Medical Sciences.

The key to continuing as a topnotch school is good faculty, good students and good facilities. That’s why the “Promises to Keep” campaign had one goal: raise as much money as possible to endow scholarships and faculty support, and enhance facilities.

When asked what gifts are needed for the future, Dean Wells didn’t hesitate.

“What is needed most are gifts for scholarships for our very deserving students and gifts for developing our outstanding faculty,” she said. “Contributions for these purposes can have a remarkable and lasting impact on the quality of learning we provide our students and on our ability to retain the most capable faculty.”

She has learned one needn’t be wealthy to make a gift with lasting impact. The dean and her husband created a professorship with a paid-up life insurance policy.

“If you start with a small endowment and make sure it gets regularly supplemented over time,” she said, “you can see it grow into a significant fund that can really make a difference.”

A variety of naming designations within the pharmacy practice building remain.

Those interested in supporting the pharmacy school may contact Raina McClure, development officer, at 662-915-6967 or rmcclure@olemiss.edu. Individuals also can visit www.umfoundation.com.