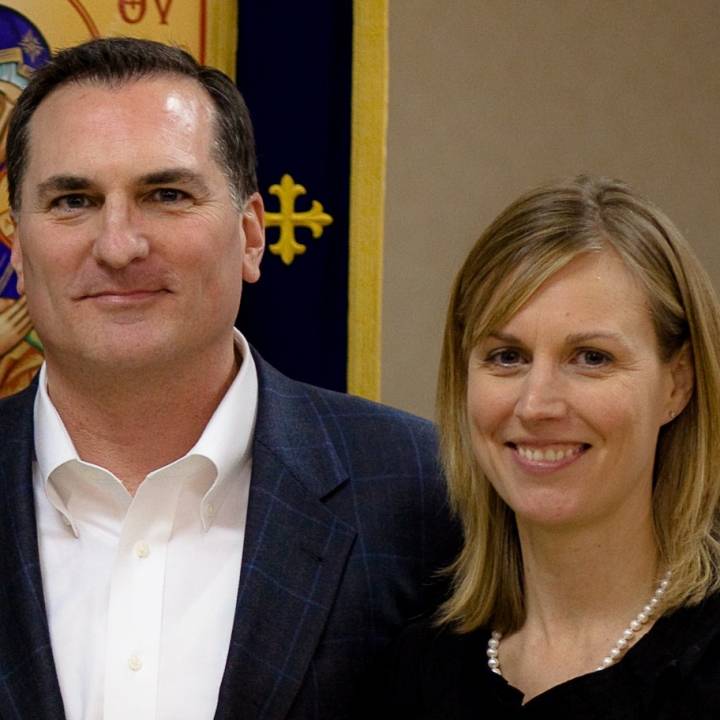 Mary E. and John B. Thomas have created the Thomas Family Scholarship Endowment to pay tribute to John’s parents, Suzanne Jones Thomas of Chicago and the late Arthur W. Thomas, Jr., as well as provide help to UM students. The gift of $100,000 includes a match by the Abbott Fund, the philanthropic foundation of Abbott. John is the vice president for investor relations and public affairs at Abbott, and Mary runs her own communications consulting firm.

Arthur Thomas, a graduate of the Medill School of Journalism at Northwestern University, came to Mississippi in the 1950s to serve as the managing editor of the Meridian Star and met his wife, a Meridian native. Although the family soon moved to Chicago for the patriarch to pursue a public relations career, he introduced his son to the journalism program at Ole Miss.

“My father inspired me to pursue a career in writing,” John Thomas said. “Communications were always an influence in our home, and I developed an interest in the field. My father brought me to campus, and I fell in love with the place. Ole Miss changed my life in ways I could never fully repay.

“Mary and I strongly believe in the direction the journalism and new media program is taking,” Thomas said, when explaining the inspiration behind their gift. “We understand the value of it, providing students a foundation for clear writing and thinking. Ole Miss has always had one of the finest journalism programs in the country, with great professors who help students develop core skills that carry them throughout their professional lives.”

Thomas graduated second in his Ole Miss journalism class in 1985. He co-founded The Oxford Times newspaper on a shoestring budget and sold his half of the business a year later. Meredith Corp. recruited him to join the staff of Metropolitan Home magazine in New York, and seven years later he transferred to Meredith’s home base in Des Moines, Iowa, as an editor of Better Homes & Gardens magazine.

“John Thomas was one of our best students during his tenure here, and he and I often talked about his career potential,” said Will Norton, dean of the Meek School of Journalism and New Media. “It is fitting that the first scholarship for integrated marketing communications in the Meek School would come from one of our graduates who has excelled as a professional in communications. John Thomas represents the kind of quality professionals who have graduated from this program through the decades. We are deeply grateful to Mary and John Thomas for this support.”

Thomas said both Norton and Samir Husni, director of UM’s Magazine Innovation Center, have been longtime mentors and friends. Norton, the founding dean of the Meek School, worked to add the new integrated marketing communications degree to the curriculum. This field of study teaches students how to understand, engage, persuade and activate consumers by coordinating or integrating all marketing communications strategies, such as advertising, mass media, social media, sales promotion, public relations and direct marketing.

“I want to give back to the journalism program and help students who have a great passion for communications,” Thomas said. “Mary and I are blessed to be in a position to do something.”

Mary and John Thomas met while serving on the Better Homes & Gardens staff. She received an undergraduate degree from Drake University and earned a master’s degree the first year integrated marketing communications was offered by Northwestern’s Medill School. John Thomas went on to serve as a public relations professional for two Chicago companies before joining Abbott in 1995.

Abbott is a global, broad-based health care company devoted to the discovery, development, manufacture and marketing of pharmaceuticals and medical products, including nutritionals, devices and diagnostics. The company employs nearly 90,000 people and markets its products in more than 130 countries. Thomas also serves as president of the Abbott Fund, which provides grants to promote science, expand access to health care and strengthen communities around the globe.

The Thomas Family Scholarship Endowment will be awarded to full-time students majoring in integrated marketing communications or journalism, with first preference given to students from Chicago or Milwaukee, Wis., the Thomases’ hometowns. Recipients will be chosen by the School of Journalism and New Media’s scholarship selection committee.