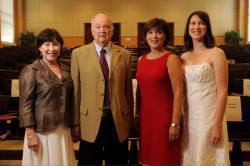 (OXFORD, Miss.) – As a student, Carl C. Comer of Fulton spent many hours taking classes in the Old Chemistry Building auditorium at the University of Mississippi. When he returned to his alma mater Saturday, it was to have the classroom dedicated in his honor.

U.S. Sen. Thad Cochran (R-Miss.) was the keynote speaker for the dedication of the Carl C. Comer Auditorium in the newly renovated facility.

“This day is a source of great pride,” Cochran said. “Those of us who were in classes here a long time ago appreciate the chance to witness this special occasion.”

“Everybody liked Carl,” Cochran said. “This auditorium is well-named.”

Even before the dedication, the auditorium was a special place for Comer.

“There’s just something about walking in that building that brings back so many fond memories,” he said. “Having the auditorium named after me is such an honor because Old Chemistry signifies tradition and the academic atmosphere that a good university should have.”

The building will become the new headquarters for the School of Engineering complex. As the building’s centerpiece, Comer Auditorium will be used for lectures, classes, presentations and other events.

These renovations are part of the $25 million Campaign for Engineering, which will help the school strengthen its education, research and service operations in ways that have a far-reaching impact on the school, the university and the state.

“I want to thank the university administration for securing the state and university funds, and for all the alumni and friends who participated in the campaign,” said Alex Cheng, engineering school dean. “Their contributions reflect their commitment to Ole Miss and the future of the School of Engineering. We are grateful for their support during this exciting and critical time for our school.”

The engineering complex includes the newly renovated Old Chemistry Building, Carrier and Anderson Halls, the Charles E. Smith Engineering Science Building and part of Weir Hall, where the Department of Computer and Information Science is housed. A new building to house the Center for Manufacturing Excellence is taking shape between Carrier Hall and Old Chemistry.

Besides the auditorium, classrooms and laboratory space, Old Chemistry will house the dean’s and other administrative offices, offices for graduate students and visiting scholars, a distance learning classroom and student areas, including a student resource center, lounge and engineering society offices. The National Center for Computational Hydroscience and Engineering, the Mississippi Mineral Resources Institute, and parts of the Civil Engineering and Geology and Geological Engineering departments will also be housed in the building.

Comer, who earned a bachelor’s degree in chemistry in 1960 and a master’s degree in combined sciences in 1965, spent the majority of his career teaching chemistry at then-Itawamba Junior College and as the dean of students, admissions director and registrar at Itawamba Community College. After his retirement in 1994, Comer continued to serve Mississippi as a missionary to Central America, as administrator of a foundation that assists students in Itawamba County and as a leader in his church.

Besides teaching, Comer served on the American College Testing Board of Directors and was a member of the Southern Association of College Registrars and Admissions Officers. He also served as president of both Mississippi Chief Student Personnel Administrators for Universities and Community Colleges and the Mississippi Association of Collegiate Registrars and Admissions Officers.

Comer’s wife, Nannette, earned her bachelor’s and master’s degrees in English from UM in 1961 and 1967, respectively. Their daughters, Karen Comer Fox, who is president and chief executive officer of Delta Health Alliance, and Mary Margaret Comer Grissom, who is lead pharmacist at St Francis Hospital in Memphis, both received undergraduate degrees from Ole Miss.

“We’re an Ole Miss family,” Fox said. “We never considered ourselves just students, alumni or fans. Ole Miss is just more a part of us, and we’re a part of it – like home.”

For more information on the Campaign for Engineering at the University of Mississippi, call Joshua Waggoner at 662-915-1601. To make a gift online through the UM Foundation, visit www.umfoundation.com/makeagift/online.php .