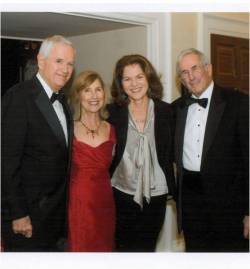 Dan Jordan, former president of the Thomas Jefferson Foundation, and his wife, Lou, (from left) are pictured with Lois Chiles and Richard Gilder

(OXFORD, Miss.) – Thanks to a $200,000 gift from a National Humanities Medal winner, the names of two visionaries in the study, teaching and preservation of American history grace a new University of Mississippi lecture series.

With an extraordinary record of supporting the humanities, New York philanthropist and investor Richard Gilder recently created the Gilder-Jordan Speaker Series in Southern Cultural History at UM. As a result of the lectureship – which honors Gilder’s family as well as his friends, Dan and Lou Jordan of Charlottesville, Va. – UM will begin inviting renowned scholars to campus in spring 2011 for lectures and discussions with students, faculty and the community at large.

“No individual has done more to support teachers of American history and to enhance an appreciation of our national heritage than Dick Gilder,” said Dan Jordan, who served from 1985 through 2008 as president of the Thomas Jefferson Foundation, which owns Jefferson’s Virginia home, Monticello. “Lou and I are deeply honored to have our family name linked at our alma mater with that of Dick Gilder, for whom we have great admiration and affection.”

Gilder is a founder and chief executive officer of Gilder Gagnon Howe & Co., an employee-owned investment firm, and is the president of the Gilder Foundation. In 2005 he received the National Humanities Medal, which is presented by the U.S. president to honor individuals and organizations whose work has deepened the nation’s understanding of the humanities or helped expand America’s access to important humanities resources.

With his friend, Lewis E. Lehrman, Gilder endowed the Lincoln Prize in Gettysburg College’s Lincoln and Soldiers Institute and co-founded the Gilder Lehrman Collection, the Gilder Lehrman Institute of American History, Yale University’s Gilder Lehrman Center for the Study of Slavery, Resistance and Abolition, and other organizations. In 2007, the Richard Gilder Graduate School was created at the American Museum of Natural History, the first doctoral program operated by an American museum.

Although Gilder did not attend Ole Miss, his friendship with the Jordans and family relationships led to his support of a history initiative on the Oxford campus. Gilder’s grandfather, Joseph Moyse, was enrolled at the university around the turn of the 20th century. Gilder’s wife, Lois Chiles, who has enjoyed a career as an actress, model and philanthropist, has two nieces pursuing degrees at Ole Miss.

“In early conversations with Mr. Gilder, it was apparent he had the highest regard for the Jordans, as well as an interest in supporting history programs at Ole Miss,” said Chancellor Emeritus Robert  Khayat. “We are fortunate to be among the distinguished organizations supported by Mr. Gilder and to have the opportunity to recognize the remarkable lives of Dan and Lou Jordan. The Jordans are among our most eminent and respected graduates.”

From Philadelphia and Jackson, Miss., respectively, both Dan and Lou Jordan earned undergraduate and graduate degrees in history from Ole Miss, and Dan received a doctoral degree in history from the University of Virginia. During his time as president of the Thomas Jefferson Foundation, Dan Jordan revolutionized the organization’s efforts in fundraising, historic preservation, scholarship, education and community outreach. Lou Jordan, an artist, also contributed significantly to Monticello’s programs and activities.

“It brings great happiness to Dan and me to know that our treasured friends, Dick Gilder and Lois Chiles, have made this gift to the University of Mississippi for lectures in history,” said Lou Jordan. “As simple as the bedtime story, words written and spoken are what give us knowledge and good company.”

The Gilder-Jordan lectureship provides for a faculty committee to invite at least one well-known scholar to participate annually. The invitation will include a public presentation as well as meetings and activities with students and faculty.

“We are profoundly grateful to Mr. Gilder for his generous gift, which will allow our students and faculty the opportunity to engage with the best scholars in American history and studies programs from other institutions around the country,” said UM Chancellor Dan Jones. “This new lecture series will significantly build on our established strengths in history, southern studies and African-American studies by helping our students, faculty and wider community deepen our understanding of our heritage as Americans.”

Ted Ownby, director of UM’s Center for the Study of Southern Culture agreed, saying, “This gift gives the university the opportunity to do some extraordinary things, inviting to campus some of the most outstanding scholars who study the history of the American South. Lectures like this, and the discussions that follow them, bring students, faculty and the public together, and they can make inquiry and debate come alive.”