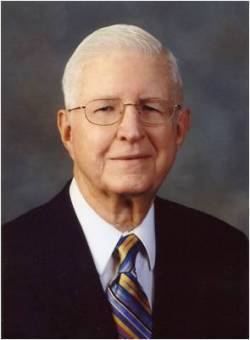 (OXFORD, Miss.) – As a war pilot, bank president and treasurer of the board of directors of the Phil Hardin Foundation, Archie McDonnell has demonstrated a lifelong interest in the education of Mississippians.

That commitment will live on for many years to come, thanks to a multiyear gift to endow a fellowship in his name with the Mississippi Teachers Corps at the University of Mississippi. The endowment is being created by the Phil Hardin Foundation of Meridian, which McDonnell helped co-found in 1964.

Housed at the university, the Mississippi Teacher Corps recruits college graduates to meet the critical shortage of teachers in Mississippi’s neediest school districts. It is one of the nation’s most competitive two-year, alternate-route teaching programs.

“Archie was a firm believer in the need for quality education in the state of Mississippi, and we couldn’t think of a better way to honor his many years of service to the Phil Hardin Foundation than by establishing this endowment at the University of Mississippi for the Archie McDonnell Teacher Corps Fellow Program,” said Robert Ward, president of the board of directors.

McDonnell served as a glider pilot during World War II. He returned from France in 1946 and enrolled at UM, where he received a Bachelor of Business Administration degree in 1948. He began his career in banking that same year as a bank examiner with the FDIC.

He went on to serve 40 years as chief executive officer and chairman of the board of Citizens National Bank in Meridian. During his tenure, the bank’s assets grew from $11 million to more than $500 million, with 23 locations in 11 Mississippi communities. McDonnell retired in 2000.

An Eagle Scout, McDonnell received the Silver Beaver Award for his many years of service as a volunteer with the Boy Scouts of America. He also served on the Meridian Public School Board from 1964 to 1974, including a term as the board’s president.

McDonnell served as treasurer of the Phil Hardin Foundation until 2008, when he was named director emeritus. During his service, he managed the foundation portfolio as it grew from $8 million to $50 million. He also served on the executive committee of Hardin’s Bakeries and was instrumental in the 1984 sale of the bakeries to Campbell-Taggert, a subsidiary of Anheuser Busch.

UM Chancellor Dan Jones praised the gift as one that can help transform the educational and economic future of poor communities.

“The Teacher Corps program here at the University of Mississippi seeks to attract the best minds into the teaching profession,” Jones said. “These teachers who come to Ole Miss from all over the United States are trained here and then assigned to teaching positions in Mississippi school districts that often experience shortages.”

Andy Mullins, who worked at the State Department of Education, helped create the Teacher Corps in 1989 and continues as its co-director. Mullins also is chief of staff for the Chancellor Jones.

McDonnell is married to the former Frances Melton. They have three children, Cathy McDonnell Hall, Archie R. McDonnell Jr., and the late John Elton McDonnell, all of Meridian. The McDonnells have seven grandchildren and five great-grandchildren.