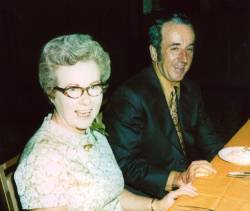 (OXFORD, Miss.) – From a small community in southeast Louisiana, the late Wallace E. Hope – a product of the Depression – began working when he was 10 and persevered to become a gas company executive. The legacy he created with his wife, Elizabeth, will be seen through University of Mississippi scholarships funded with their $450,000 gift.

“My parents – both very intelligent – never had the opportunity to go to college,” said William M. “Bill” Hope of Memphis, the couple’s son and a UM alumnus. “They were not unlike others in their generation. They worked very hard from a young age, but they were fortunate to do extremely well. Being caring people, they planned this gift to provide educational opportunities for others.”

Wallace Hope died in 2005 at the age of 86. Elizabeth Hope, who now lives in Fairfield Bay, Ark., recently formalized the couple’s plans for a charitable trust to fund scholarships at their only child’s alma mater.

Two-thirds of the trust has created the Wallace E. and Elizabeth G. Hope Scholarship Endowment, providing financial support to Ole Miss students in the School of Education and the School of Nursing on the Oxford campus. The other third is designated for the James W. “Jimmy” Davis Scholarship Fund in UM’s Patterson School of Accountancy.

“We commend the Hope family for recognizing the need for expanded educational opportunities, particularly in the South,” said Tom Burnham, dean of education. “The School of Education interacts with many university students with financial struggles who desire to become quality teachers. The Hope Scholarship Endowment will allow our students to continue their pursuits in the education profession, making an immeasurable impact on the lives of children. For this, we are grateful.”

Bill Hope said his parents chose to assist the School of Education because the gift would help prepare future educators, who then could go out and impact many lives. They selected the nursing program because of the constant shortage of nurses. In addition, Hope described his mother as being “very bright” and said she would have pursued a career in the medical field if she had had the opportunity to go to college.

Hope was invited by his parents to direct the other third of the gift and decided to honor professor and friend James W. “Jimmy” Davis, holder of the Eugene Peery Chair of Accountancy.

“Jimmy Davis taught me auditing,” said Hope, the former managing partner of the Rhea & Ivy accounting firm, which merged in 2008 with Dixon Hughes. “He had a huge influence on me and my decision to stay in public accounting. I want to recognize and thank him.”

Davis remembers Hope among the first class of students he taught at Ole Miss.

“It was a stellar group, equal to any we have ever had,” Davis said. “Bill was confident and the image of success we knew he would achieve. He did just that: rose to the top position in a firm, always supported Ole Miss, hired more than his share of our graduates, and maintained personal and professional friendships over 45 years. I am proud to call him my friend, and I am honored – and humbled – that this gift will enhance the scholarships that bear my name.”
Hope said that his father also played an integral role in his professional success.

“When I graduated from Ole Miss with two degrees, my dad told me, ‘What you’ve got to understand is all you have is an opportunity – it is a great one – but the game is just starting,’” he said. “I took him seriously and made something of my opportunity. I hope the scholarships provided by my parents will encourage recipients to be the best they can be.”

Wallace Hope spent his career with Amoco – which had grown to be the largest natural gas producer in North America by the end of the 20th century – and served in various management positions throughout the Southern and Midwestern regions of the country. The family lived a number of years in McComb but moved often with Amoco. The Hopes were residing in Macon, Ga., when their son graduated from high school and headed to Ole Miss – a trip he likened to “going home.”

Bill Hope earned undergraduate and graduate degrees in accountancy and now serves on the Patterson School of Accountancy’s Advisory Council. He and his wife, Clara Dean, an Ole Miss alumna, are the parents of a son, Spence, who with his wife, Kristin, pursue careers with an investment banking firm.