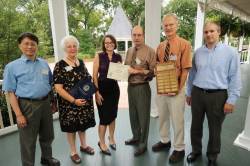 (OXFORD, Miss.) – Melanie Graupner, an international student from Germany, is the first recipient of a memorial scholarship paying tribute to J. Robert “Bob” Woolsey, late director of the Mississippi Mineral Resources Institute at the University of Mississippi.

Graupner, who was recognized today during an MMRI board meeting on the Oxford campus, plans to use the scholarship to attend geology field camp in South Dakota next year.

“I feel extremely honored that I was selected for this award named for such a great geologist,” said Graupner, an Ole Miss junior who plans to pursue graduate studies after earning a bachelor’s degree in geology. “My ultimate goal is a career with a U.S. company that allows me to work out in the field.”

A renowned geologist and expert in undersea mineral resources, Woolsey died in a July 2008 car accident. Memorials in his name amounting to more than $11,000 were made to the University Foundation, and Maxine Woolsey, his widow, has committed additional resources to fund the Woolsey Scholarship Endowment for Geology and Geological Engineering.

Woolsey said Graupner’s plans fit with the intent of the annual scholarship award, which she said should recognize students who are “enthusiastic about geology and possess a proven work ethic.”

“To appropriately honor Bob, this scholarship should help students become hands-on geologists and geological engineers,” she said. “Bob always felt the best classrooms didn’t have walls. I want scholarship recipients to use the funds to have extraordinary experiences.”

Bob Woolsey’s work in the scientific community garnered attention for the university, but Maxine Woolsey said her husband, in return, was grateful to the university for allowing him to take students on his travels to further enhance their training and education. Among their research projects were efforts to develop better underwater drills and search for mineral resources on the ocean floor, identifying sand deposits and oil and gas reserves.

“The idea for the scholarship formed right away because MMRI and the students were Bob’s second family,” said Maxine Woolsey. “He cared about everyone, and students thought of him as Dad. Bob was an educator and a doer, constantly learning and sharing amazing experiences with students and colleagues. His advice to students was to choose careers that would give them the opportunity to do something they truly enjoyed. He obviously loved what he did; I don’t think he ever would have completely retired.”

MMRI director since 1982, Bob Woolsey was instrumental in founding UM’s two marine centers: the Center for Marine Resources and Environmental Technology and the Seabed Technology Research Center, which is a divison of the National Oceanic Atmospheric Administration’s National Institute for Undersea Science and Research. Through these centers, he organized an international consortium of scientists and engineers to study gas hydrates. Woolsey led the consortium’s efforts to establish a gas hydrates monitoring station/seafloor observatory in the Gulf of Mexico.

The goal of the monitoring station – a multidisciplinary project that includes 17 academic institutions, six government agencies and several industrial participants – is to investigate the role of gas hydrates in seafloor stability (and instability), as a major potential energy resource and as a source/repository of greenhouse gases and therefore a determinant of global climate. More recently, Woolsey helped guide efforts to produce biodiesel from cooking oil and other plant sources to power MMRI’s equipment and vehicles, as well as UM’s grounds maintenance equipment.

In an era when most geologists have become specialists, Woolsey’s broad range of expertise allowed him to work on a diverse range of projects, said Terry Panhorst, UM assistant professor of geology and geological engineering.

“He was an old-style geologist, the kind that is hard to find these days,” Panhorst said. “His experiences took him around the world, and because of his broad range of experience, he could talk with anybody. He was as comfortable sitting on the front porch of a house in Belize chatting with people as he was in a meeting here on campus or in Washington, D.C.”

For more information on contributing to the Woolsey Scholarship for Geology and Geological Engineering, go to www.umfoundation.com/makeagift.