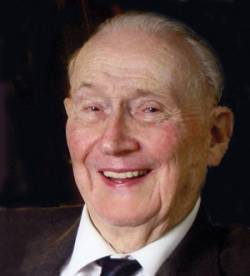 OXFORD, Miss. – "A library is the absolute heart of a university."

That favored sentiment was often delivered by Charles E. Noyes, whose passion for teaching changed the lives of countless University of Mississippi students and whose passion for learning will impact generations to come.

A $128,000 gift from the estate of the late professor emeritus of English is designated for the Charles E. Noyes Library Endowment, which was created in 1991 by two alumni. The bequest adds to the legacy of the UM benefactor who already had given more than $266,000 during his lifetime to strengthen the University Libraries and other academic and cultural areas on campus.

In addition, after retiring in 1982 and until his death in 2008, Noyes focused his energies on building private support for the libraries through the Friends of the Library organization. His efforts were recognized through the more than 200 memorial gifts in his name totaling $21,000 made to the University Libraries in the months since his passing. Per Noyes’ wishes, his personal book collection also was donated to the J.D. Williams Library, where a graduate reading room was named in his honor.

"Like any professor, my father had a great love of books, and reading had been a favorite pastime since he was a young child," said Helen Noyes Linzey of Florence, Ala., executor of the estate. "He had talked about an estate gift to the library for about 20 years. Although he recognized that technology has greatly changed libraries, he hoped books would continue to be enjoyed and treasured.

"My father and I definitely shared a love of reading," said Linzey. "Throughout my childhood, I visited the public library in Oxford regularly, then as an Ole Miss student, I studied in the Williams Library. I grew up believing libraries were sacred places."

Dean of Libraries Julia Rholes said, "Dr. Noyes helped us acquire thousands of additional books for the University Libraries through his years of involvement with Friends of the Library. Because of this generous estate gift and the many memorials paying tribute to his life, thousands more will be added to our collections. It’s difficult to adequately describe the far-reaching implications of his influence on the University Libraries. He will be missed greatly for his tremendous work and for his wonderful wit and humanity."

David and Barbara Arnold of Yazoo City first created the Noyes Library Endowment Fund, and at the same time contributed to the John Pilkington Library Endowment. The Arnolds said they wanted to honor the English professors who had impacted their lives as UM freshmen.

"Dr. Noyes was a fantastic English professor," said David Arnold, a retired senior vice president of Mississippi Chemical Corp. "He made literature come alive. He was an avid reader who could convey his knowledge in an incredible way to a whole classroom of students. When my wife and I saw him on our visits to campus through the years and learned of his support of the library, we knew this would be a great way to honor his influence and support the university."

Drs. Harvey and Di Ann Lewis of Jackson have established a planned gift through the university’s 1848 Society that also honors Noyes.

"Dr. Noyes was a great asset to me in the office, and he always has been to the university," said Harvey Lewis, a former UM vice chancellor for academic affairs and business professor. "Just knowing him and knowing how much he valued Friends of the Library helped us realize we wanted to do this."

Noyes joined UM in 1953 as a member of the English faculty, specializing in Restoration and 18th century English literature. He co-authored a crucial biography of Christopher Smart, an 18th century poet, and published articles on Samuel Johnson, James Boswell and David Hume. Noyes served the UM posts of provost, acting vice chancellor, associate vice chancellor and director of the summer session.

The professor is credited with providing invaluable assistance within the UM administration during and after the university’s tumultuous integration in 1962. Throughout this span of conflict, he composed speeches for then-Chancellor J.D. Williams.

Besides Linzey, Noyes is survived by a son, James C. Noyes of Nashville, as well as nine grandchildren and nine great-grandchildren. The professor was preceded in death by his wife, Ruthie Marie Smith Noyes, and a daughter, Marie Noyes Hartwick.

For more information on making a gift to the Charles E. Noyes Library Endowment Fund, go to www.umfoundation.com/makeagift.