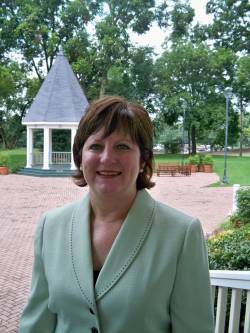 OXFORD, Miss. – In her 11 years with the University of Mississippi, Tina Hahn recorded some of the school’s greatest achievements and has now returned to UM as communications specialist for development. In her new role, Hahn will draft press releases about major gifts to the university, as well as funding proposals to support university initiatives.

“I’m thrilled to be back at Ole Miss and to be part of such an incredible staff,” said Hahn, who served in the UM media and public relations office as staff writer, coordinator of university news, and associate director before moving with her family to Decatur, Ala., in 2001. During her last year at UM, Hahn received the Outstanding Staff Member recognition in her EEO category.

“When I worked in media and public relations, I especially enjoyed talking with alumni about private support and writing their stories,” Hahn said. “Private gifts are so crucial to the success of the university, and it’s a privilege to write about people and organizations committed to strengthening Ole Miss.”

Hahn brings a wealth of experience to her new position, having covered the university’s $529.5 million Commitment to Excellence Campaign, Phi Beta Kappa bid, and creation of both the Ole Miss Women’s Council for Philanthropy and the Ole Miss First scholarship program. Even after leaving her public relations post, Hahn continued writing about philanthropy at UM, serving as a consultant with the UM Foundation.

“We’re excited to have Tina back in Oxford and on our development team,” said Debbie Vaughn, UM’s assistant vice chancellor for development. “Tina’s knowledge of the university and her experience writing about private support are wonderful assets.”

A graduate of the University of Southern Mississippi, Hahn worked as a news editor and public relations director in Columbia and Jackson before arriving at UM in 1990. She is married to James Hahn, who holds bachelor’s and master’s degrees from UM and works as a health-care executive. The Hahns’ daughter, Leslie, is a University of Alabama graduate and currently attends law school at Mississippi College; their son, Lawson, will be a freshman at UM this fall.

Hahn herself has been active in a number of philanthropic pursuits, including most recently the Community Free Clinic of Decatur and Morgan County (Ala.) and the Decatur General Foundation.