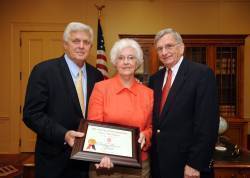 OXFORD, Miss. – Two Oxford residents who have contributed to the life of the University of Mississippi for more than four decades are recognizing a leader for his contributions: former chancellor Robert Khayat.

“Every area of university life has been greatly impacted by Robert Khayat,” said Max Williams, a veteran university professor and administrator. “This is an incredibly strong place because of his leadership. Robert took his role as chancellor very personally.”

Nila Williams agreed, saying, “Robert Khayat had a vision about what Ole Miss should be on the local and national level, and he put everything into achieving that vision. He has a warm personality that radiates throughout the state and across the country. He enjoys all aspects of his life and is loved by so many people.”

Max Williams’ own UM career provided the couple opportunities to observe and interact with Khayat in many arenas. While serving as professor of sociology in the Department of Sociology and Anthropology, Williams directed the UM Center for Population Studies. He has been recognized for his extensive knowledge regarding the demographics of Mississippi and the South from the U.S. Census to economic development initiatives and heritage tourism. In the latter part of his career, Williams became the director of research in the Office of Research and Sponsored Programs, where he impacted UM research, scholarship and creative activities.

Williams chaired the Faculty Senate and provided leadership as a member, then chair for 13 years, of the UM Committee on Intercollegiate Athletics. In this role, he also was a member of the Executive Committee of the Southeastern Conference for six years, served as the secretary of the conference and was faculty athletics representative to the NCAA and the SEC for the university. He now serves on the University of Mississippi Athletics Association Board.

“Robert was named chancellor at a unique time in our university’s history. I am not sure anyone else could have accomplished everything that he has,” Williams said. “The depth of his knowledge was incredible; he had an insatiable desire to seek information because he was so interested in every facet of the university. He confronted any issue that he felt hurt the university, and he never compromised on any issue that affected our long-term interests.”

Khayat said he is humbled by the Chancellor’s Trust gift and grateful for all the Williamses have given to the university.

“The University of Mississippi has been strengthened by the extraordinary commitment, leadership and generosity of Max and Nila Williams,” Khayat said. “Their long-term investments of time and expertise have been both extremely beneficial and inspiring. We are profoundly appreciative of this amazing couple’s devotion to the university.”

“Our whole lives have been centered on the University of Mississippi, and we have loved every minute of it,” said Max Williams.

Williams, in fact, came to the Oxford campus in 1957 as a freshman and was selected for a Carrier Scholarship, one of the most prestigious scholastic awards at the university. He earned bachelor’s and master’s degrees at UM before going on to receive a doctorate at Vanderbilt University. As a graduate student he taught Khayat’s wife, Margaret, and later met Khayat in 1968.

“We’ve had such a history with Robert and Margaret Khayat,” said Williams.

Nila and Max Williams were childhood sweethearts in their hometown of Corinth, Miss. She became a student at Mississippi University for Women, later completed her degree at Ole Miss and enjoyed a career in insurance with Internal Medicine of Oxford. The Williamses are the parents of two children, Dr. Ernie Williams of Oxford and Emeline Sahlein of Pasadena, Calif., and are the grandparents of six. They are involved in First Presbyterian Church and an array of community service activities in Oxford and Lafayette County.

(tina hahn)
****
For more information about the Chancellor’s Trust or other opportunities to provide private support, visit www.olemiss.edu/giving.