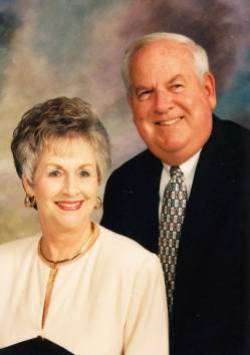 “Meeting those four young people gave us insight into how much scholarships can help when you can’t afford to go to school,” said Clyde Edwards.

The Clyde and Yvonne Edwards Ole Miss First scholarships will award full tuition for four years for two students entering UM this fall. The Edwardses have designated the scholarships for students enrolled in the School of Business Administration who are from either Madison County, where Clyde Edwards grew up and he and Yvonne live, or Rankin County, where the couple has business interests.

The remainder of the Edwardses’ gift will provide immediate support to existing scholarship initiatives through the Robert C. Khayat Legacy Fund, which was recently created to honor UM’s retiring chancellor and meet the university’s most pressing needs.

“As Chancellor Khayat has said, the University of Mississippi exists to create opportunities for students,” said Deborah Vaughn, executive director of University Development and assistant vice chancellor for University Relations. “For that reason, scholarships will always be a priority for us, but they’re even more important in a challenging economy.

“We are extremely appreciative of Clyde and Yvonne’s gift, and we thank them for helping us to meet our goal of providing an education for every deserving despite that student’s economic situation.”

Clyde Edwards said that Ole Miss First and the Legacy Fund appealed to him because those programs allow for immediate assistance, unlike an endowed gift, which must be invested.

“I wanted to do something where the money could be used now,” said Edwards, who retired in 1989 from Trustmark Bank, where he worked for 30 years, earning the title executive vice president.

“The Edwardses’ commitment to helping young people achieve their dreams is truly remarkable,” said Ken Cyree, dean of UM’s business school. “On behalf of the two students who will be able to earn degrees from the School of Business Administration because of the Clyde and Yvonne Edwards Ole Miss First scholarships, I offer my deepest appreciation.”

An alumnus of UM’s business school, Clyde Edwards received a bachelor’s degree in banking and finance in 1958, before earning a master’s degree from the Louisiana State University Graduate School of Banking. While serving in the Army National Guard, he joined the management training program at First National Bank of Jackson, which later became Trustmark. Before retiring, he bought a part-interest in Adcamp Inc., a Flowood-based asphalt paving company, where he still works while also managing his farming interests.

Yvonne Edwards, who earned her undergraduate degree from Millsaps College and holds a master’s degree in education from UM, taught elementary students in Greenwood, Natchez and Jackson. Although the couple’s two daughters followed in their mother’s footsteps, graduating from Millsaps College, their oldest child, Clyde Edwards III, followed in his father’s steps, earning a banking and finance degree from Ole Miss in 1987.