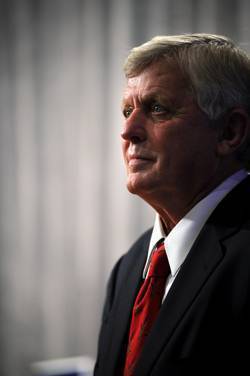 OXFORD, MS – FOX News anchor Shepard Smith is applauding the leadership of University of Mississippi Chancellor Emeritus Robert Khayat with a $75,000 gift to the Legacy Fund, which stands at $275,000.

Created by the University Foundation to honor Khayat upon his retirement, the fund also will help offset the negative effects of the current economy on UM students and the academic environment. Plans call for Khayat – who retired in June after serving as chancellor 14 years – to determine which initiatives benefit from the fund.

“Dr. Khayat has transformed our special place into a truly ‘Great American Public University.’ It’s an honor to give him a few more dollars to work some magic,” said Smith, who anchors the “Fox Report,” one of the top-rated programs in cable news, and “Studio B with Shepard Smith.”

Gifts to the Legacy Fund are coming from alumni, friends, faculty and staff members, who have been impacted by Khayat. A 2003 graduate, Summer Clements Anderson of New York and Birmingham – who with her husband, Clyde, gave $5,000 to the fund – said she first met Khayat as a freshman in the Chancellor’s Leadership Class. In her first day of class composed of Chancellor’s Scholars, the two discussed a book they both were reading.

“For the next four years, every time I saw Chancellor Khayat around campus or town, he always greeted me in the same way, ‘Hello, Summer!’, and proceeded to ask how I was doing and what I was reading. It didn’t matter if he had 20 people with him; he always stopped and spoke to me,” she said.

“I always felt so special and important because Chancellor Khayat knew my name. I believe it made me work harder in my classes and also in my extracurricular activities,” Anderson continued. “He inspired me by example to take the time to speak to everyone I knew, regardless of my schedule or the day I might be having. What an inspiration Chancellor Khayat is as a leader and as a person, not only focusing on the big things in life but also on the small things that really make a difference.”

“Chancellor Khayat is an incredible leader who recognizes and values all members of this university community and the contributions they make,” she said. “Almost everyone has a personal story to share about the chancellor because he is genuinely interested in everyone and takes time to really know people. The chancellor (emeritus) and I understand how important private donations are to our university, and I could not think of a better way to honor someone who has made such a significant difference on this campus.”

Dr. Ken Sufka, professor of psychology and pharmacology and chair of the Faculty Senate, first became acquainted with the UM leader when Sufka was named “Teacher of the Year” during the chancellor’s first year in office. The professor said he chose to contribute to the Legacy Fund because of his belief in private support and the chancellor emeritus.

“Private funds allow a university to achieve so much more, from scholarships and facilities, to endowed professorships. A truly excellent university has to attract that external support,” he said. “Chancellor Khayat, without a doubt, has transformed the university into an amazing academic environment. His effective, skilled, visionary leadership has created wonderful opportunities for students and an incredible work environment for faculty.”

While serving as chancellor, Khayat garnered more than $800 million in private contributions during his tenure, which allowed the university to achieve many wide-ranging goals. Among his other achievements are a steady increase in enrollment, as well as growth in the number of National Merit Scholars; the founding of a Phi Beta Kappa chapter; the selection of Ole Miss students for Rhodes, Marshall, Truman, Fulbright and Goldwater scholarships; and a Grand Award from the Professional Grounds Management Society for the best-maintained college campus in the nation.

“One only needs to reflect on the accomplishments of this university under Chancellor Khayat’s leadership,” said Wendell Weakley, president and CEO of the UM Foundation. “When considering where we have come in the last 14 years, I can think of no better tribute to our chancellor emeritus than to provide much-needed support to our students in his honor.

“It is heartwarming to see the number of alumni, friends, faculty and staff who are answering the call at this critical time for our students,” Weakley said. “Gifts of all sizes are needed as we embrace Dr. Khayat and continue to strengthen the university.”

Those wishing to contribute to the fund can visit www.umfoundation.com/makeagift.